Sethan (セト神, Seto-shin) is the Stand of Alessi, featured in Stardust Crusaders.

Sethan is bound to Alessi's shadow, taking its form but with a distinguished shape, the most prominent feature being its round head, a pointed crest, and large eyes. If the shadow is sideways, Sethan's cruel, jagged beak is revealed.[1] Its design is based on the opening of the Tetsujin 28-goW anime, as well as the Nazca geoglyphsW.[2]

In the colored manga, Sethan's shadow is purple. In the anime, it is portrayed as black.

Sethan has no personality of its own and only does what its user wills it to.

Sethan is a weak Stand with almost no offensive options, relying on its esoteric power to make its opponent weaker than Alessi. However, this alone makes it a terrifying opponent to face.

Because Sethan takes on the form of Alessi's shadow, it imitates and replicates everything he does and has.[1]

Because of this, any weapon Alessi holds is also held by Sethan, allowing it to attack the opponent with the shadow of the weapon.[3] Moreover, the shadow can move independently from its possessor and even partially stick out of a surface to attack.[1][3]

Anyone standing in Alessi's shadow will age backward at a rapid speed.[1] Polnareff, who touched it for a split second, ended up as an approximately 7 or 8-year-old child,[1] while a woman in her twenties stood in it for ten seconds and was reverted back into a helpless fetus[4] that, without the connection to her mother's womb, is bound to die within minutes. If a Stand user is de-aged to before they acquired their Stand like Jotaro, they will temporarily lose it.[5]

The mind of the target also ages backward, making them forget things they only knew as an adult (like names of friends or how to conjure a Stand). Stands also become younger in form, as Sethan also reverts the age of the spirit, causing stands to potentially change in appearance and power.[3]

Sethan axe.png|Sethan attacking in the manga 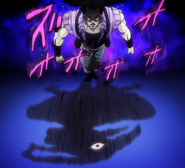 The side of Sethan's face