Sex Pistols is composed of six tiny bullet-like entities (referred to by Mista as "people") living inside a revolver, numbered from 1 to 7, skipping the number 4 (most likely due to Mista's superstitious nature). All of them have teardrop-shaped heads, white eyes with black outlines and small stripes going outward from the center, and extremely small pupils, some of which appear cross-eyed. In later appearances, they are missing the radial lines in their eyes and their pupils are more focused, in order to make them appear more natural. Frequently, Sex Pistols will open their mouths, revealing crooked teeth. Their "clothing" consists of shirts with pointed shoulder pads, legging-like tight pants with knee pads, and pointed shoes with toe caps that curve upward. Ironically, they each have four fingers instead of five on each hand.

Interestingly for Stands, all Pistols have distinct personalities, and frequently converse with Mista. Each Pistol has a different personality, but they all share a childish and irreverent nature; they are prone to argue, can make inappropriate comments, and will not work if they are not fed.[2] Outside of battle, Mista doesn't actually control the Pistols, doing as they please.

Sex Pistols is a collective like Bad Company and Harvest and by themselves are very weak Stands, so they rely on the gun bullets they ride to participate in combat. Despite this, they are highly autonomous and have a long range (going as far as bullets can fly). This allows Mista to control the battlefield and gather information from afar thanks to the Pistols being able to spy on their enemies.[3] If need be, the Pistols can make decisions by themselves whenever the opportunity presents itself, often surprising foes as a result.

Sex Pistols is unusually resilient and can persist even if Mista is put in a state of near-unconsciousness or even near-death. Should this be the case, the Pistols can continue to help Mista's allies.[4]

However, the Stand is vulnerable to attacks while out and active,[5][6] but Mista can survive the most brutal harm dealt to the six members of his Stand so long as a single one of them remains unharmed.[7]

The Pistols' ability is to literally ride the bullets that Mista fires in order to position themselves over an area (although they can hover around too), and then violently kick the bullets to change their path.

Mista's most common use of this is to rebound shots, allowing the sudden redirection of bullets to hit moving targets, strike key areas, or otherwise take his opponents by surprise by using odd and unpredictable angles. If all 6 of Sex Pistols are on a single bullet, they have the power to split said bullet into multiple pieces when they all kick, creating multiple projectiles. However, the Stand is vulnerable to attacks while out and active, but Mista can survive the most brutal harm dealt to the six members of his Stand so long as a single one of them remains unharmed. The Pistols can also block incoming bullets, and on one specific occasion, No.5 has even saved Mista from three fatal shots fired to the head by Prosciutto.

The Pistols can block incoming bullets, and on one specific occasion, No.5 has even saved Mista from three close-proximity fatal shots fired to the head by Prosciutto.

Mista also has the ability to shoot two bullets at the same time, shown when used against Sale. Although unexplained, the general consensus is that a Pistol shoots a bullet from another chamber by striking the primer at the same time that Mista fires.

Mista normally does not reload his own gun but has Sex Pistols reload it for him.[8] For this, he uses a six-chamber revolver. Mista can use any type of firearm, but a chamber allows the Pistols to reload all at once, as reloading a pistol magazine takes more time.[9] Unlike Hol Horse's Emperor, another gun-related Stand, Sex Pistols has no firearm to work with by default and must always be provided a gun and ammunition, since it is useless for offense otherwise. However, each Pistol is able to fire a bullet without a gun by kicking the bullet's primer.[10] 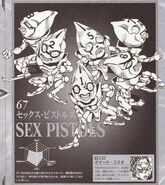 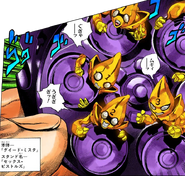 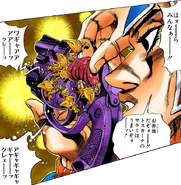 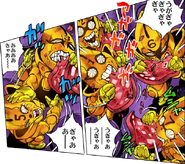 Chasing after an runaway Sale 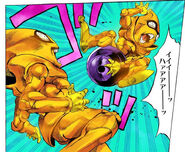 Sex Pistols No.1 and 2 ricocheting a bullet Mista shot 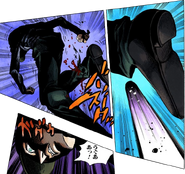 Sale's leg get hit by the bullet of No.1 and 2 kicked 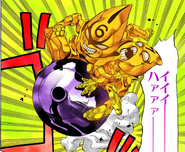 and kicks it to Sale's throat 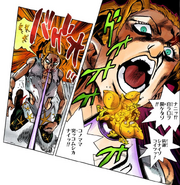 All the teammates are approaching Sale

All the members kicking a bullet 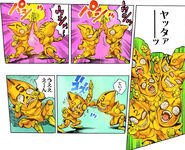 The relationships within the Stand

No.5 crying in response to Mista on the verge of death

No.6 with Bucciarati, wanting Prosciutto dead

All of Sex Pistols attacking Ghiaccio

No.3 attempting to steal No.5's piece of salami

No.5 cries after being punched by No.3
Sex pistols hype.png
No.1 pumps the rest of the Sex Pistols up for their oncoming battle

No.2 rides a bullet
Sex pistols celebrate
No.1 and No.2 celebrate after hitting Sale in the leg with a bullet

No.6 and No.7 high-five each other after hitting Sale in the throat

All of the Sex Pistols kick a bullet towards Sale's face

No.5 cries after being hit again

All of Sex Pistols focus on attacking Ghiaccio's weakpoint

Sex Pistols trying to think of what caused the revolver to break.

Sex Pistols & Mista in the ending credits for Part 5 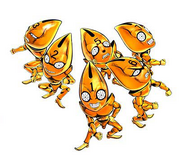 Sex Pistols in Eyes of Heaven

Sex Pistols on a bullet, Eyes of Heaven