This article is a stub. You can help JoJo's Bizarre Wiki by expanding it.

Heritage for the Future
Sherry Polnareff (シェリー・ポルナレフ, Sherī Porunarefu) is a minor character mentioned in Stardust Crusaders. She is Jean Pierre Polnareff's little sister who was murdered by J. Geil, prompting Polnareff to seek revenge against her killer.

Sherry was raped and murdered by J. Geil, leading to Polnareff's desire to seek her killer to exact revenge. She seemed to have gotten along well with her brother, as he frequently carries her picture with him.

Eventually, Sherry's brother manages to avenge her by battling and ultimately killing J. Geil. Later, Polnareff asks Judgement to revive her after the Stand grants him a wish. Instead, the Stand manifests a golem that looks and sounds exactly like her, but attacks Polnareff when he lets his guard down and gets close enough. The golem is ultimately destroyed when Judgement throws it at Magician's Red as a diversionary tactic. 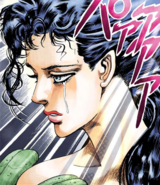 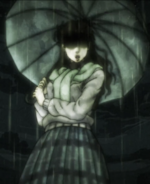 Sherry's clone in Heritage for the Future