Shigechi is a short and stocky teenage boy.

Apparently bald, his crown is textured by short spikes, and he has thick, drooping earlobes. He has small, high eyebrows, and youthful features. His teeth are misaligned, and he is missing his left maxillary central incisor.

He wears a modified, dark school uniform with studs outlining his chest in two "V"s, and in a line drawn downwards from each angle, touching high points on a serrated cut lining the bottom of his jacket.

Shigechi initially comes off as naive or unintelligent, with little thought for the use of his powers beyond gathering lost change. However, he is shown to have very high levels of creativity and intelligence, as he uses Harvest to pick up booze with the knowledge that booze injected directly into the blood causes almost immediate drunkenness, know the exact nerve he needed to pierce to kill Yoshikage Kira, and even innovates with Harvest to create a method of transport not unlike tank treads or a bucket relay that has been shown to move faster than Josuke Higashikata and Okuyasu Nijimura, as well as climb up walls extremely fast.

He also appears socially inept, being overjoyed at the thought of having friends in Josuke and Okuyasu and giving them, without a second thought, a share of the spoils he acquired through Harvest, if too much money isn't concerned Shigechi is always friendly. Shigechi also held strong familial loyalty, carrying a picture of his mother wherever he went and when facing Kira, he struggled to escape so he could protect his parents from such a menace. Shigechi tends to act quite politely in front of adults, notably deeply apologizing to Kira for almost colliding with him.

On the other hand, Shigechi's greediness and possessiveness get the better of him. He couldn't bear the thought of sharing the five million yen he, Josuke and Okuyasu acquired through the lottery with them, and stole the check from them, threatening to kill both if they approached. After his eventual reconciliation, he possessiveness still extends to being unwilling to give money to his friends, but lending it; moreover, he was very possessive of his lunch, dropping his polite demeanor for a more confrontational one when he thought Kira was the one to have stolen it. He also had a habit of helping himself with the teachers' coffee and tea stash in order to have free drinks. He is also fairly arrogant about his abilities, and when squaring off with Josuke and Okuyasu he claimed his Stand was invincible. He made the same mistake with Kira and faced off against him despite not knowing at the time what Kira's Stand powers were, which proved to be his ultimate downfall.

Shigechi's Stand is Harvest, represented by a swarm of diminutive figures of considerable collective power, able to efficiently scan areas for objects set for them to find and/or retrieve. He also uses it to great effect in combat, being shown to fully incapacitate Josuke Higashikata and Okuyasu Nijimura in a matter of minutes and severely injured Okuyasu multiple times which were only fixed by Crazy Diamond, and on a separate occasion incapacitated Yoshikage Kira in a matter of seconds, and both times held the ability to kill by slicing a blood canal, but didn't due to being reluctant to kill and lost due to greed getting the better of him.

Shigechi, a second-year student at Budôgaoka middle school, was first seen after Josuke followed some of the units of his Stand during a coin collecting spree in fear of finding a potential enemy Stand user. At first, Josuke and Okuyasu believed him to be a complete idiot by his strange demonstration of generosity to share the wealth he had just accumulated by Harvest, though Josuke insisted on not taking advantage of his naivete, but instead work together with Shigechi and then equally share the spoils.

Soon Josuke and Okuyasu's plan backfired as Shigechi turned on them, insulted at being called an idiot and selfishly not understanding that they deserved the equal share of the money they had all worked for together. This started a wild goose chase after him at which point Shigechi revealed that Harvest's advantage relies heavily on his numerous Stand units. Using multiple attacks from Harvest's men combined with dirty tactics, such as having Harvest inject alcohol directly into the bloodstream of Josuke and Okuyasu, Shigechi proved to be a tough opponent. After being subdued, Shigechi finally admitted that Josuke and Okuyasu were indeed deserving of one third each of the money they had gotten together. They then became friends at school.

Later, due to an unfortunate coincidence, Shigechi unintentionally changes his lunch with the hand from a victim of Yoshikage Kira. Shigechi, accompanied by Josuke and Okuyasu asking him for money as well as having lunch with him, is unknowingly followed by Kira trying to retrieve his "girlfriend". Upon his success, however, Shigechi confronts Kira, believing the stranger to have stolen his lunch, only to find out about Kira's homicidal nature. The middle-schooler pays with his life for this knowledge before he was able to successfully get to Josuke for help.[4]

Having managed to leave the group a button from Kira's suit coat, Shigechi's soul is seen ascending by Reimi Sugimoto, and she warns the allied Stand users of his fate.

Shigechi's abrupt death becomes one of the main reasons that Josuke and most friends search for and confront Yoshikage Kira, while the others remains cautious of Kira's presence. Shigechi's death at the hands of Kira is later followed by his fellow allied Stand user, Aya Tsuji, once Josuke and one of his friends confronted him for first time.

Shigechi was the 2nd DLC character to be announced for the game. Despite being one of the mass majority of playable characters in the game with the "Stand" Style, Shigechi cannot turn Harvest on/off, nor does he have access to the Stand Rush ability returning from the Capcom game. In order to change movesets, Shigechi can switch between Offensive Formation and Defensive Formation, which dictates some of the skills he can use and changes Harvest's combat capabilities.

While Harvest is in Offensive Formation:

While Harvest is in Defensive Formation:

Shigechi's HHA, "Now I'm real mad!", has him send out a large wave of Harvests toward the opponent, sending them flying on impact. The HHA can hit a downed opponent, making it possible for it to be used twice in a row. It also automatically summons three Harvest units for use afterward. Notably enough, the large number of individual Harvests on-screen can potentially cause the game to lag.

Shigechi's GHA, "You want proof?! Here it is!", has him send out a massive wave of Harvests toward the opponent. If they connect, the Harvests will cover the opponent from head to toe, forming a mound as the opponent cannot be seen past the Stand. Each one relentlessly punches into the opponent's skin before they all deliver an uppercut in unison, sending them flying backwards as the individual Harvests scatter (both GHA and HHA are similar to how he attacked Josuke and Okuyasu). The GHA automatically summons three Harvest units for use afterward.

Shigechi has some unique interactions when fighting Yoshikage Kira:

Shigechi was confirmed for the game alongside Kira and Akira Otoishi. He is still voiced by Kappei Yamaguchi, despite having previously voiced Forever in JoJo's Bizarre Adventure: Stardust Crusaders. As a Stand User, Shigechi is one of many characters with wildly varied abilities that grant him uniqueness in battle. His playstyle from All Star Battle, involving the use of Harvest to enhance or alter his abilities, returns.

In the altered timeline, Shigechi survived his encounter with Kira and is seen hanging out with Josuke, Koichi, and Okuyasu at Cafe Deux Magots.

He is paired with Caesar Anthonio Zeppeli in the Eyes of Heaven Tournament but was eliminated in the preliminaries by Joseph Joestar and Dio Brando.

Looming menacingly over Josuke and Okuyasu. 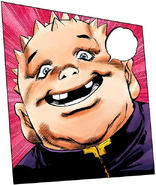 Playing with the coins he found.

Shigechi with a picture of his mother.

Shigechi offers half of his money to Josuke and Okuyasu.

Shigechi and his friends posing with their hard-earned cash.

Shigechi is moved by friendship.

Shigechi asks a woman for a date. 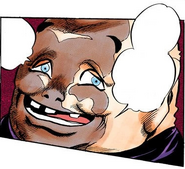 Shigechi gives off a slimy grin, revealing his dubious side. 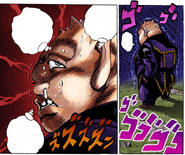 Shigechi, Josuke and Okuyasu nervously trying to redeem their ticket. 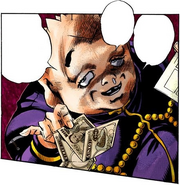 Shigechi betrays his friends, revealing his intentions to them. 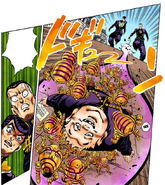 Shigechi is carried by Harvest even on buildings. 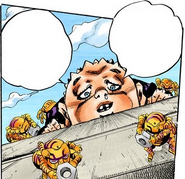 Taunting Josuke and Okuyasu after sabotaging the makeshift bridge.

Shigechi is tricked by Okuyasu as The Hand swipes the check away. 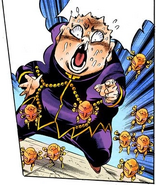 Screaming in terror after Josuke tears up the valuable check.

Shigechi gets punched in the face by Okuyasu once his guard is lowered.

Being warned by Josuke to never double-cross them again.

Shigechi, Josuke and Okuyasu all receiving their shares of the money.

Being threatened by Josuke after making another greedy comment. 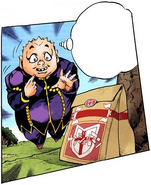 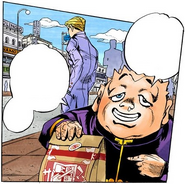 Shigechi holding what he believes is his lunch, which is actually the "girlfriend" of serial killer Yoshikage Kira.

Shigechi threatens to kill Kira with his Stand if he moves. 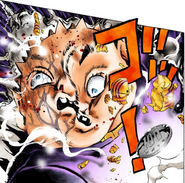 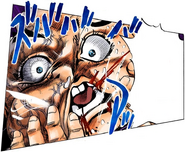 Shigechi's face mangled from the explosion.

Shigechi nobly vows to protect his friends and family from Kira.

Moments away from safety, Shigechi sees Kira for the last time.

...just before revealing his true intentions.

Playing with the coins he found.

Shigechi offers half of his money to Josuke and Okuyasu.

Shigechi and his friends posing with their hard-earned cash.

Shigechi gives off a slimy grin, revealing his dubious side.

Shigechi, Josuke and Okuyasu nervously trying to redeem their ticket.

Shigechi betrays his friends, revealing his intentions to them.

Being carried by his Stand, Harvest.

Taunting Josuke and Okuyasu after sabotaging the makeshift bridge.

Shigechi is tricked by Okuyasu as The Hand swipes the check away.

Screaming in terror after Josuke tears up the valuable check.

Shigechi gets punched in the face by Okuyasu once his guard is lowered.

Being warned by Josuke to never double-cross them again.

Shigechi, Josuke and Okuyasu all receiving their shares of the money.

Being threatened by Josuke after making another greedy comment.

Shigechi holding what he believes is his lunch, which is actually the "girlfriend" of serial killer Yoshikage Kira.

Shigechi prepares to battle Kira and his Stand, Killer Queen.

Shigechi threatens to kill Kira with his Stand if he moves.

Shigechi's face mangled from the explosion.

Shigechi nobly vows to protect his friends and family from Kira.

Searching for Josuke so Crazy Diamond can heal him

Moments away from safety, Shigechi sees Kira for the last time.

Shigechi's spirit ascends towards the heavens.

Shigechi (with other deceased Morioh citizens) featured in the third opening, Great Days. 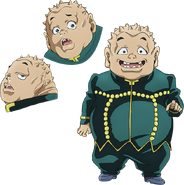 Shigechi's render for All Star Battle

Shigechi's render for Eyes of Heaven

Shigechi as an Area Boss in Diamond Records 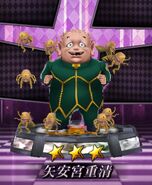 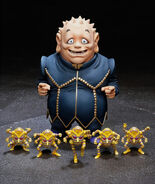 Shigechi as a figure with Harvest 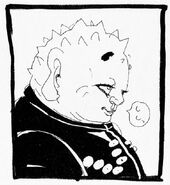 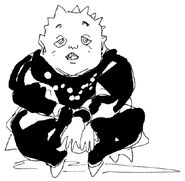