DU Episode 25 - Atom Heart Father
Shinobu Kawajiri (川尻 しのぶ, Kawajiri Shinobu) is a character appearing in Diamond is Unbreakable. She is a housewife and the mother of Hayato.

Shinobu is a woman of seemingly average height and slim build, with hair that is parted to the right and tied back in a low ponytail. Sometimes, like in her first appearance, she will tie back several locks of hair that are part of her bangs.

She wears several different outfits throughout the series, most of them having skirts and patterns such as polka-dots.

Shinobu has a personality closer to that of a younger woman than a responsible mother, detesting her marriage. While she felt no hatred towards Kosaku, her relationship with him was cold and full of regret. She wished for more excitement in her life and often lashed out at her husband and son out of frustration. Though she resents her son for trapping her in her marriage, she occasionally reaches out to him, only to be ignored. She is very pleased when he finally begins to return her affection.

However, once her husband's appearance is stolen, her relationship with her "husband" improved as his new sudden care for her. From cooking meals, stealing money for the landlord, and protecting her from Stray Cat, Shinobu's romantic affections for her "husband" are rekindled, excited by his sudden change in personality. By the end of Part 4, she lovingly awaits his return but is unaware that both her original husband and the man who took his identity are gone.

She claims to have the type of character that is usually liked by cats.

Shinobu first met Kosaku Kawajiri in junior high school and dated him because her friends thought he was cool. They married when she became pregnant. After years in a passionless marriage, she has grown to resent her husband and would have divorced him long ago if not for their son Hayato.

Shinobu's feelings for Kosaku change when, unbeknownst to her, Yoshikage Kira takes on his appearance in an attempt to hide from Josuke Higashikata. In an attempt to blend in with Kosaku's family, Kira starts to treat her well, and Shinobu suddenly finds herself harboring romantic feelings towards her spouse after many years.

Shinobu eventually encounters Tama in the cellar of her house. Trying to scare it away, Shinobu accidentally causes the cat's death. Wanting vengeance, Tama, reincarnated in the Stand Stray Cat, attacks her by ripping off one of her toenails using its ability. She is saved from its attack by Kira, leaving her more in love than ever.

On the morning of Bites the Dust's time loop, Shinobu's favorite Wedgwood china set is destroyed. She initially lashes out at Hayato, taking this as proof that he doesn't care about her at all, and tells him to go ahead and do whatever he wants from now on. Kira calms her down and kisses her goodbye as Hayato watches angrily.

The last time the morning is repeated, Hayato avoids the conflict with his mother and kisses her goodbye for the first time in years, promising silently to protect her. She is confused but pleased by the change in his demeanor, and ignores Kira.

After Kira is killed, Hayato does not have the courage to tell her that Kosaku is dead, and Shinobu continues to wait for her husband to come home.

Shinobu in her first appearance 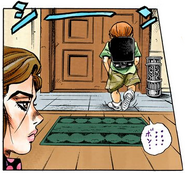 Being ignored by her son

Witnessing Kira in the shower 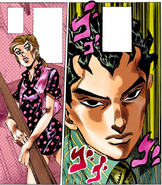 Being kissed goodbye by Hayato 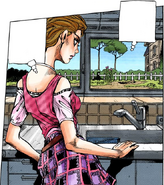 Thinking by the sink

Smirking at her pathetic husband.

Surprised at Kira bringing her breakfast.

Shinobu lets the family cat back inside.

Shinobu questions her "husband" and his odd behavior.

Shinobu blushes as she leaves tea for Kira.

Kira about to strangle Shinobu.

Shinobu finds Tama, a stray British Blue in her basement.

Rolling around, trying to become friends with Tama.

Attacked by one of Stray Cat's air bubbles.

An unconscious Shinobu being held and protected by Kira.

Trying to give Kira a goodbye kiss before work.

Shinobu is kissed by Kira for the first time.

Shinobu waits for Kira to return home, unaware of his death.

Shinobu's appearance opposite of her "husband" in the third opening, Great Days. 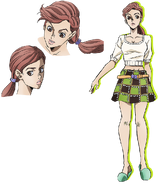