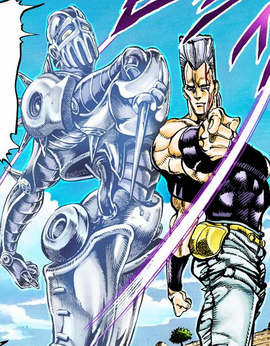 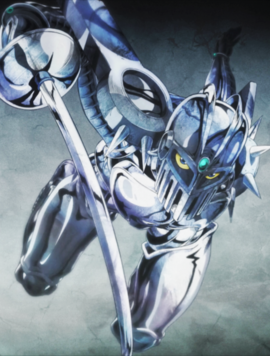 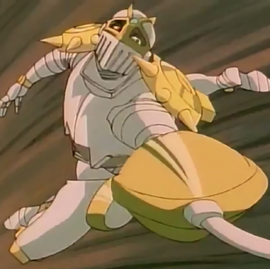 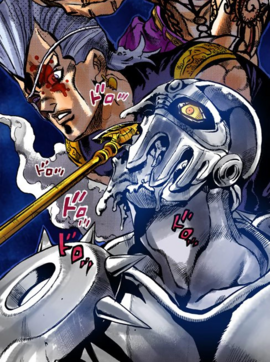 Silver Chariot appears as a thin, robotic humanoid clad in silver, medieval armor, armed with a basket-hilted foil. Although Silver Chariot is thin, it wields heavy plate armor spiked at the shoulder pads and elbow pads. Silver Chariot has a distinctive helmet with a jewel embedded in the forehead and several pointed down projections protecting the mouth and cheeks. Chariot's sword can be unequipped for tasks that require two hands. According to JOJOVELLER, its design is a combination of a robot with an occidental armor.[1]

In Vento Aureo, as a result of its User losing his limbs, the corresponding parts of Silver Chariot are replaced with metal spike-like appendages.

Silver Chariot is often portrayed as being covered in polished silvery armor, befitting its name. The most notable examples of such a depiction being the anime and video-games. The Stardust Crusaders OVA instead portrays it as wearing dull, grey armor while being complimented with gold armor pieces.

Like most Stands, Silver Chariot is devoid of any will or personality, serving Polnareff without question - though it does display a high learning ability, as Polnareff rarely gives it direct orders. Silver Chariot's battle cry is "Hora Hora Hora",[2] and it seems to have had a tendency to shout "Pami" when Polnareff was a child.[3]

Silver Chariot is a dedicated combat-oriented close-range Stand. It represents the Tarot Card The ChariotW, which symbolizes invasion and victory.[4]

Silver Chariot is a powerful, battle-dedicated close-range Stand that primarily fights with the rapier it is equipped with.

All its powers directly assist the Stand in battle but have limited use anywhere else. It is an incredibly agile Stand, able to attack enemies with barrages of sword slashes and thrusts before the opponent can react. It can also use this agility, along with its sword, to defend and deflect attacks aimed at it or its user. Silver Chariot usually doesn't stray far away from Polnareff, but still had the ability to move several meters away from him to attack.[5] Silver Chariot has the distinct weakness of not being able to see whatever its user cannot see, making it weak if Polnareff is in any way in a blind spot.

Silver Chariot's oddest property is that it is clad in a heavy suit of silver armor.

The armor lowers its speed, but also prevents it from being injured, as Polnareff does not receive the same injuries that the armor does as long as it's donned. The armor is shown to be capable of withstanding extreme heat without melting.[2] This ability's drawback seems to be Polnareff's inability to see through Silver Chariot's eyes. Polnareff is able to shed Silver Chariot's armor in order to gain more tremendous speed (enough for afterimages to appear), but doing so renders his Stand more vulnerable to attack as a trade-off.[8]

Silver Chariot's only ranged ability is actually a secret technique.[10] This launches his sword with great force and precision, capable of ricocheting off other objects and striking with enough force to pierce a human body. The major drawback of doing this is that Silver Chariot can only materialize one sword, so Polnareff must retrieve the weapon before being able to attack again. 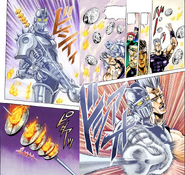 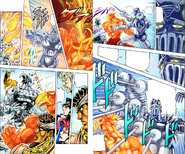 Silver Chariot made a statue of Magician's Red with its sword

Silver Chariot taking off its armor 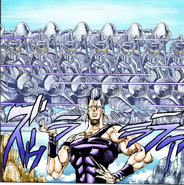 Reverted into a younger form by Sethan 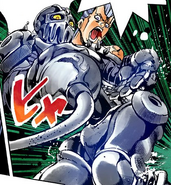 Silver Chariot in a flashback 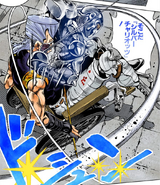 Silver Chariot pierced by the Arrow

Silver Chariot pierced by the Arrow 2

Polnareff, Silver Chariot, and the Tarot card representing The Chariot

Silver Chariot without its armor

Reverted into a younger form by Sethan

Silver Chariot's fingers being sucked into Cream's void, destroying them

Silver Chariot in the OVA

In a flashback, investigating Passione

Being summoned to attack the boss of Passione

Having its right eye destroyed by King Crimson

Summoned by Polnareff for a blind circle attack

Silver Chariot pierced by the Arrow

Morphing as its being attacked King Crimson

Silver Chariot scurries away from Diavolo.

Seemingly melting away as its master dies

Small Silver Chariot in Heritage for the Future

Silver Chariot as seen in All Star Battle

Silver Chariot as seen in Eyes of Heaven

Silver Chariot & Polnareff as they appear in GioGio's Bizarre Adventure 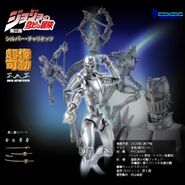 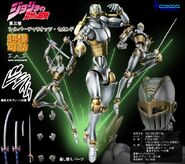 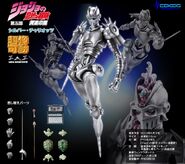 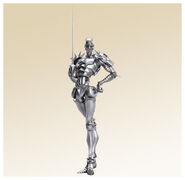 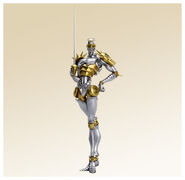