Episode 10 - New York's JoJo
Smokey Brown (スモーキー・ブラウン Sumōkī Buraun) is a minor ally featured in Battle Tendency. Smokey is an ordinary petty thief hailing from New York whose newfound friendship with Joseph Joestar places him at the spectator's seat of the battle against the Pillar Men.

Smokey is a teenage dark-skinned boy of below-average height and medium build. He commonly wears a sort of flat cap.

Smokey is friendly and mild-mannered. He is often shocked by the fantastic, horrific situations that surround his friend Joseph Joestar.

Smokey first appears stealing Joseph Joestar's wallet. Immediately, he is accosted by a pair of New York policemen, who beat and attempt to extort him. To his surprise, he is saved by Joseph, who makes use of his Ripple in disabling the policemen (comparable to the way in which Dario Brando was bailed out of jail by George Joestar I in Part 1).

He is later invited to accompany Joseph and Erina to a restaurant, though is surprised when Joseph expresses timidity towards his grandma, despite having effortlessly taken care of two armed policemen. At the restaurant, Smokey is verbally discriminated by a mafia grunt due to his ethnicity, but is avenged after Joseph quickly subdues the man. He is later seen that night conversing with Joseph about bra sizes in a cafe before being interrupted by Straizo.

Smokey subsequently takes a background role, expressing shock and surprise at Joseph's antics and the supernatural elements of their adventure (in a role similar to that of Speedwagon in Part 1 ).

Near the end of the series, Smokey appears alongside Speedwagon, as the two witness Joseph's final battle against Kars. During the battle he tries to tell Joseph that Lisa Lisa is his mother but fails.

He is seen at Joseph's "funeral" and like the others, is surprised to see Joseph alive.

At the end of the story it is explained that Smokey saved enough money for college, where he studied political science. He would later become the first African-American mayor of his home town in the state of Georgia.

(The information below derives from the TV Anime. As such, it may or may not be considered canon.)
In 1950, he was among the beloved family gathered around the deathbed of Erina Joestar, reverently paying his final respects to the woman who gave him a new life.

(The information below derives from the TV Anime. As such, it may or may not be considered canon.)
During the events of the High Priestess story arc, a flyer for a charity peace concert that Suzi Q is attending displays a picture of Smokey, now mayor of New York City, as a sponsor of the event. 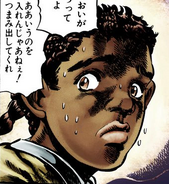 Close up of Smokey

Smokey's last appearance in the manga

Smokey with new friends Joseph and his grandmother Erina

Smokey with Erina and Speedwagon at Joseph's funeral

Smokey with the others surprised to see Joseph alive

Smokey As He Appears In The OVA's Timeline Videos