Soft & Wet is a humanoid Stand of a streamlined, robotic form, light in color, and similar in height to Josuke.

On the top of its head is a five-pointed star bound with a circle. Horns roughly two-thirds the width of its head grow from the region of the ears, shaped as tapering pentagrammic prisms. It has round eyes, shaped as slotted screw heads; vertically dividing very small, slight, round pupils. Its face has a thick gap running from the top of the forehead past the bottom of the chin. Initially, Soft & Wet had large holes in the sides of its face, and shorter, lined "horns".

The front of two broad plates covering its torso is cut like its face in the shape of a large anchor; as well as in a line beneath both arms and between the base of its back and shoulders.

Its feet and hands are covered with plating, as are the sides of its hips and shoulders, both of which are shaped like sharp hearts and bear a five-pointed star. It has fine arms and legs, with dark, exposed ball-and-socket joints supported by short exterior cables. Its pelvis is bare and mechanical. The gaps in its plating reveal a deeper surface, covered in a fine pattern of horizontal ridges. An internal structure is visible at its profile, showing blocks approximating human centers of mass.

The design was created to match up with Josuke's outfit, rather than its ability. Hirohiko Araki imagined a sailor's uniform combined with the flotation devices in a life vest.[1] In later chapters, its torso takes on a more 'heart-like' shape. It also gains a circular jewel under its neck, and its shoulder pads become triangular, jutting out of its shoulders perpendicularly. Its ears have also grown a bit longer since it first appeared.[1]

Soft & Wet is white and purple in the colored manga, but, is yellow and green in the video games adaptation of the series featuring it.

Josefumi's bubbles were initially featureless. After his fusion with Kira, Josuke's bubbles now bear a five-pointed star, similar to Kira's bubbles, and appear to be a sort of fusion between two bubbles of different sizes.

Soft & Wet's Stand cry is "ORA ORA ORA ORA" similar to other members of the Joestar family, however every so often an "ORA" is switched to an "ARA". This could be the consequences of the fusion of Kira and Josefumi, being corrupted and altered.

Soft & Wet is a humanoid close-range Stand. It possesses enhanced strength, demonstrated first when it breaks a large portion of an apartment wall with a single back kick, and is also capable of extremely rapid hand-to-hand combat. The extent of the damage it can inflict is limited, however, as it is unable to break rocks.

Its strength in melee exchanges compared to other Stands has been further demonstrated in the brief encounter with Yotsuyu Yagiyama's Stand, I Am a Rock. Despite its volley of fast-paced strikes, Soft & Wet easily avoided and overcame it with a single 'Ora'-articulated strike.[2]

Soft & Wet generates star-embedded floating bubbles, which must make contact with its target to work effectively. However, Josuke can control where the bubbles can fly, allowing him to send them where they are needed. The bubbles are actually comprised of tiny cords vibrating at super-high speeds, giving them the appearance of spheres.[3]

Josuke often takes direct advantage of his bubbles and their properties. The bubbles have lifting power, allowing Josuke to envelop others like Yotsuyu Yagiyama in a giant bubble and lift them in the air,[4] as well as help him reach vantage points. Josuke has also enveloped himself and allies with giant bubbles to take advantage of their situational protection.

After undergoing equivalent exchange with Yoshikage Kira, bubbles produced by Soft & Wet gained aspects of his own bubble-generating Stand ability. As such, Soft & Wet's bubbles are divided into a distinct "Josefumi half" and "Kira half", with a visible seam connecting the two portions.

Along with its regular stand-based bubble generation ability, Soft & Wet is able to make bubbles out of existing liquids. However, these bubbles can only be maintained briefly and lack the abilities of ones generated by the Stand itself.

As the story has progressed, Josuke has developed this ability. Early in the story, he would often use one bubble, but later on, is shown conjuring dozens upon dozens with a quick flurry of strikes.​​​​​

Later in the series, it is revealed that the bubbles are actually spinning threads that form in a sphere, which would relate it to the Spin.

These can break time and space, maybe even being able to break Wonder of U's 'Calamity'.

Soft & Wet's signature ability is to "steal something from [an object] and take it for itself", which works in conjunction with the bubbles. Josuke can thus steal aspects or properties of inanimate and living things. Said properties seem to also be smaller objects that come from a bigger object. Examples include:

The stolen objects can stay in the bubble and are still able to bust later (as shown with the bubble with the sound of the light switch).[8] The exact quantity and type of object Josuke may steal, how long he may keep them, and how it is redistributed is currently undefined. According to Josuke, Soft & Wet's ability cannot be applied to himself.[11]

While used by Josefumi Kujo, this ability was described as "Absorption". As Soft & Wet's original user, Josefumi had mastered his ability to the point that he could control it at an extremely precise level. This degree of precision with his Stand allowed for the creation of the grafted Locacaca branch; by absorbing and re-arranging matter from two plants with expert precision, Josefumi was able to fuse them together.

As previously stated, after undergoing equivalent exchange with Yoshikage Kira, Soft & Wet's bubbles become a hybrid of it's own bubbles and those of Killer Queen. These fused bubbles retain some aspects of Killer Queen's bubble-generation ability. These bubbles are able to pop with enough force to cause damage at close range, as seen when Josuke uses one to shatter Tamaki Damo's sunglasses. Josuke can also use this force to propel any small objects stored inside of his bubbles, seemingly with a degree of control over the direction they fly in. In addition to this, Josuke is able to injure opponents by popping bubbles which have been embedded under their skin, an ability that one of the A. Phex Brothers remarked bears a striking resemblance to the late Kira's own fighting style.

During the fight against Urban Guerrilla and his pet Josuke utilized the full extent of the First Bomb by detonating bubbles he had previously buried underground.

In the most recent chapters, specifically the fight against Wonder Of U, Josuke was shown generating bubbles from his left shoulder that he could not control. These were described as “not existing in this world”. Because of this, the bubbles were able to break Wonder Of U’s Calamity, and able to travel through Paisley Parks ability, ultimately hitting Tooru twice, severely injuring him. 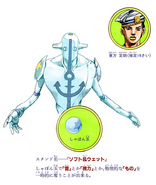 Soft & Wet kicks down a wall

The Stand is stolen due to California King Bed's ability

Trying to push back Born This Way 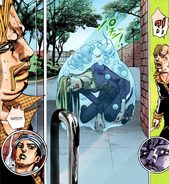 Executing Tamaki Damo in the streets

Soft & Wet fending off Blue Hawaii's attack with a shovel 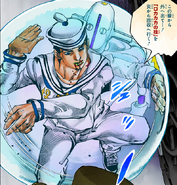 Creating a bubble by itself 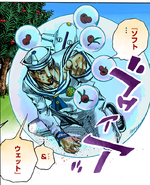 Making bubbles and capturing English Yew to use against Poor Tom 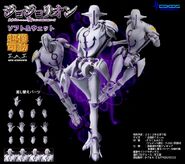 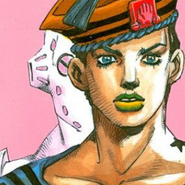 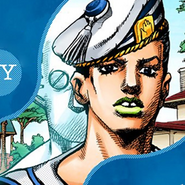 Retrieved from "https://jojo.fandom.com/wiki/Soft_%26_Wet?oldid=388006"
Community content is available under CC-BY-SA unless otherwise noted.