Soft Machine is an armored humanoid figure with robotic eyes and no visible mouth or nose. Most of its entire body is covered in a series of large spiked nubs, with bullet-shaped objects protruding from the top of its head. In its right hand, the Stand holds a short, dagger-like rapierW that is utilized for its ability.

In the colored manga, Soft Machine is portrayed as white and purple. In the anime, it is green with orange eyes.

As it only needs one stab to completely disable its victims, Soft Machine's puzzling ability makes its ambushes fearsome. But once in the open, its mediocre fighting abilities are clear.

Its only notable feature is that it is equipped with a short rapier that can act like a normal weapon if need be. With its sword, Soft Machine managed to scratch Moody Blues' hand.[2]

Soft Machine is capable of literally deflating people (including its own User) and objects by stabbing them with its small rapier.[3]

Deflated people and objects have 'air' visibly escape from the puncture in their bodies and eventually become deflated, limp and rubbery, akin to a balloon.[2] Deflated people also have their clothes deflated, and despite their state, are kept alive.[2]

The deflated victims can then be pulled through small spaces, such as pipes, often by means of stretching them out. Among the best examples of the ability's usage is when Soft Machine covered a ship with the deflated version of an identical ship, allowing its user to hide between the two layers and stay undetected.[4] 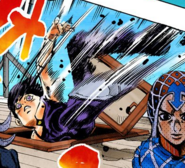 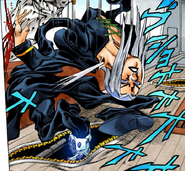 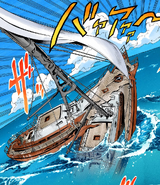 Soft Machine deflates a ship within another

Giorno Giovanna begins to deflate due to Soft Machine's ability

The distinct wound created by Soft Machine's rapier, as shown by Moody Blues taking on the form of Narancia Ghirga

Air rushes out of the wound created by Soft Machine

Soft Machine and its user in Uragirimono no Requiem