Medical Research
Environmental Conservation
Supernatural Research
The Speedwagon Foundation (スピードワゴン財団, Supīdowagon Zaidan) (often abbreviated as "SPW") is a powerful and influential organization created by Robert E. O. Speedwagon, funded by the money he made from the oil he discovered in the United States. The foundation dedicates itself to medical research and environmental conservation, but it has also helped the Joestars countless times through intel, supplies, and backup. The foundation also has connections with underworld groups and studies many supernatural phenomena, such as the Pillar Men and Stands.

Their first noted action was the investigation of the ancient Mexican temple where the Pillar Man Santana slumbered. Speedwagon Foundation scientists subsequently sheltered the remains of Santana after his defeat, and uncovered a prediction announcing the awakening of three other Pillar Men in the same year. The foundation's Special Fighting Technological team also fought alongside the Germans against Kars' vampire army.

The Speedwagon Foundation effectively continued to help the Joestar bloodline throughout the 20th century. In 1988 and 1989, they aided the third Joestar Group in reaching Cairo, through reconnaissance intel and various modes of transportation. Moreover, doctors from the foundation helped with taking care of Holy Kujo in Tokyo, while agents in Egypt discovered the existence of the Egypt 9 Glory Gods. They tended to the team's injuries at the end of their journey, most notably in helping revive Joseph Joestar.

In 1999, the Speedwagon Foundation led by Jotaro Kujo first escorted Joseph Joestar to Morioh and then were given the Bow and Arrow for study and protection.

In 2011, the SPW Foundation provided a submarine for Jolyne Cujoh's escape from Green Dolphin Street Prison. After Jotaro Kujo was rendered comatose, the doctors of the foundation tended to his body and cooperated with Jolyne to retrieve her father's Stand and Memory Discs. They also threw a special spear toward the Kennedy Space Center, which combined with Ermes Costello's Kiss and enabled her and Jotaro Kujo to reach Enrico Pucci.

There are two known headquarters of the Speedwagon Foundation located in Washington, D.C. and Dallas, Texas. However, there are also smaller branches in Tokyo and Meguro, Japan.

Speedwagon and scientists from the SPW Foundation watching over Santana

The Special Fighting Division which intervened against Kars' army 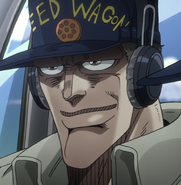 A SPW pilot with the trademark SPW cap

A scout from SPW (exclusive to the anime)

An ambulance from the SPW Foundation 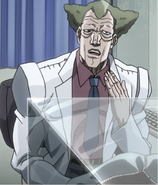 A doctor from the SPW Foundation who helped revive Joseph 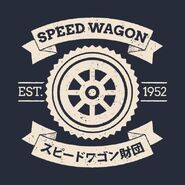