Spice Girl is a humanoid Stand of a feminine figure, resembling Trish in its proportions.

She has several mathematical signs on her body: Two plus signs rest on her shoulders, two on her elbows and one on her forehead, followed by a division sign on her brow and a multiplication sign on her crown. Her face is without a nose and has black streaks running vertically across her eyes. In some panels she is drawn with irises, but in the majority of her appearances in the manga (and in all her depictions in other media such as video games and figurines), she lacks them. In the colored manga and video games, she is depicted with golden eyes, while the anime depicts her with golden scleras and lime green eyes.

Spice Girl wears a holed slip dress with a square pattern sewn onto it with various metallic pieces dangling on the front and back of the dress's bottom; she also wears matching high-heel shoes.

Most media featuring Spice Girl portray it as being various shades of pink.

When first hinted at,[1] and during its full reveal,[2] a deep handprint with sharp nails appears on the surface under Trish's hands.

A rare feature among Stands, Spice Girl is fully sentient and has a consciousness separate from Trish's.[2]

Spice Girl's sentience is to the point where she gives herself her own name.[3] Likewise, Trish refers to the Stand as "her" and "she", unlike the common "it" used by other Stand Users. The Stand nonetheless considers herself a part of Trish.[3]

Spice Girl is collected under pressure[2] and openly analyzes the situation to help advise Trish. She considers hesitation to lead to weakness[2] and inversely, praises the value of one's determination, the reverse of hesitation.[3]

In battle, Spice Girl is merciless and was shown to very crudely insult Notorious B.I.G as she thrusts a pipe into it.[3]

Trish first becomes aware of Spice Girl's existence due to the Stand actually speaking to her when she was panicking over what to do about Notorious B.I.G, but Spice Girl claims that she's been on Trish's side ever since she was a little girl.[2] In her first appearance, Spice Girl takes the role of Trish's mentor and constantly advises her, but also pushes her to be braver.[3] After Trish stands for herself, Spice Girl becomes more passive.

She also openly acknowledges Giorno Giovanna's role in influencing Trish's spirit into maturing, referring to him as a mysterious individual.[4]

Spice Girl is a close-range Stand with considerable strength. She was able to use a pipe to stab and section Notorious B.I.G into pieces in an attempt to destroy it[3] and could break off the front of a plane by rapidly punching the walls and roof of the cabin.[4] Moreover, her softening power enables her to take advantage of Trish's surroundings easily.

With Trish's bold and ingenious command, Spice Girl proves to be a valuable addition to Team Bucciarati.

Spice Girl is able to soften any material she strikes.[5]

When Spice Girl hits something with her fists, she can soften said object into a rubber-like consistency. Any material, even metal or rock, will be softened into the same state. Said objects gain consistency and elasticity akin to rubber or putty, unable to be crushed even by a strong Stand like Notorious B.I.G or be punctured by any force including sharp objects and thus making said object actually many times more resilient.[3] She can even soften moving objects like bullets, causing projectiles to merely flatten upon contact.[6] Not only that, moving objects that are softened retain their kinetic energy when returned to normal, allowing Trish to unleash surprise attacks using projectiles that were thought to be neutralized.

Because of the elasticity, the object accumulates energy when deformed and, when allowed to return to normal can create a sudden, violent backlash.[3]

The softness can persist even if contact between Spice Girl and the object is broken. She may also freely undo her power when needed.[6] 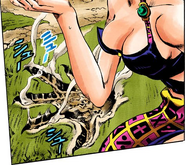 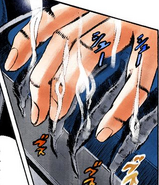 Claw marks left by the Stand during her introduction 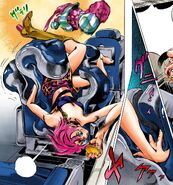 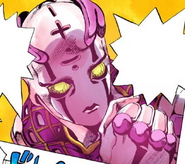 The Stand explains her own ability 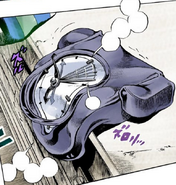 The first glimpse of Spice Girl

The Stand reveals itself to its master for the first

"Please give me your orders."

"That which is soft... is more unbreakable than any diamond!"

"Spice Girl." The Stand reveals its name to its master

Spice Girl alongside her user in Uragirimono no Requiem

"You have made me very angry!" 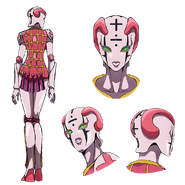 Spice Girl as it appears in Eyes of Heaven 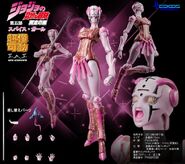 Spice Girl as a SAS figure 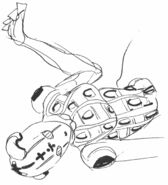