It is a state of perfect or near-perfect rotation which produces a unique form of energy that can be applied for a multitude of uses. The Spin may be considered a counterpart to the Ripple power featured in the original timeline.

The Spin is a state of rotation defined by its closeness to perfection, that perfection being the Golden Rectangle (黄金長方形, Ōgon Chōhōkei), more specifically the Golden Spiral that is derived from the Rectangle, a mathematically endless spiral, and a feature said to be omnipresent in the surrounding nature and a fortiori in works of art.[1]

Unlike the average rotation, the Spin is persistent and produces more rotational energy[1] than it takes to create. That rotational energy is transferred to nearby objects in the form of vibrations[2] and can be wielded for a wide array of purposes.

The Spin is a specialty of the Kingdom of Naples. It is intensively used there either for medicine or for battle. All characters who know the Spin are either Neapolitan or have been taught by a Neapolitan.

Because of its miraculous property, the Spin has been wielded as a technique by a chosen few at least since the Middle Ages[3] from which several specialized skills have been derived.

Users of the Spin typically try to spin objects to follow as best they can the Golden Rectangle, creating a near endless rotation that may then create an infinite amount of rotational energy, before throwing said objects at a target. To do so, they apply a small force causing the object to Spin near perfectly, giving it an impulse of energy to start the rotation, and then let the rotation perpetuate itself. One advice given to neophytes is to visualize the perfect rotation and then trying to emulate it.[4]

To enhance the Spin, one must approach the Golden Rectangle, a rectangle with a proportion equal to the golden ratio (approximately 16:9) that when recursively divided into a square and another golden rectangle, traces the path of the Golden Spiral; a self-similar and thus endless spiral. Used as a scale, the Golden Rectangle allows the creation of a perfect rotation and thus an infinite amount of energy.

The Spin is deceptively and relatively easy to learn at the basic, as the novice Johnny Joestar manages to produce a conclusive Spin with a cork within a day of learning about the power's existence;[4] however, it is extremely difficult to master. The Spin must be imbued into a medium that will keep on spinning and must be thrown so the object can transfer the energy through contact. Thus, a Spin user must be able to expertly aim and throw objects in order to hope for a result. One must also know the human body extremely well to exploit the effects of the Spin on people to the fullest. For instance the Zeppeli Family are trained as surgeons to use the Spin on criminals on death row,[5] otherwise, the Spin may only result in a simple enhancement of destructive energy. Others like the members of Naples' royal guard only use a highly specialized application of the Spin on the human body.[6]

The Spin can be applied to a variety of objects. Examples include corks,[4] bullets[7] water,[1] or typically any object on which there is an axis around which the object can rotate well. Tusk is a Stand linked to the Spin which uses Spin-imbued finger- and toenails.

Experts in the Spin like Gyro prefer special Steel Balls: steel spheres characteristic of a baseball or boule, which he calls and shows to be something near the perfect tool for applying and maintaining Spin. While the Zeppeli Family uses a grooved version for maximum faithfulness to the Golden Rectangle, others like Wekapipo use special spheres embedded with smaller satellites to spread their zone of attack. Objects that aren't perfectly sphere-shaped do not produce a perfect Spin and are thus subpar compared to the Steel Balls.[1]

Johnny Joestar's Stand Tusk, developed with Gyro's mentoring, allows Johnny to spin his fingernails and toenails[8] to act like bullets. Unlike the Steel Balls, the nails possess more metaphysical properties.

The Cavalry Spin, also known as the Super Spin, represents the most faithful emulation of the golden spiral humanly possible.

Developed in the Middle Ages to bypass the shield and armor of mounted knights, stirrups were invented to harness the power of a running horse. The horseman must let the horse run with the force of the Golden Rectangle, meaning it must gallop at its most natural speed. At this perfect pace, the horse spontaneously creates the energy of the Spin; it can then be harnessed through the stirrups and passed on through the body, into the arm and wrists to further empower the throw of the Steel Ball. Thus, a truly perfect rotation emitting an infinite amount of energy is created.[3][9][10] The Cavalry Spin is associated with the power to produce gravity, the only force supposedly capable of going between dimensions.[11]

Unlocking the Cavalry Spin grants mastery over an infinite amount of energy, therefore, several miraculous feats are possible. First and foremost is that its wielder spontaneously evolves their Stand, should they already have one. A steel ball thrown in this rotation will summon the Stand Ball Breaker,[12] while Johnny develops Tusk's final evolution: Tusk ACT4.[13]

Ball Breaker and Johnny's Tusk ACT4 appear to represent the infinite force of the Golden Spin which trumps many powers. Both are notably capable of bypassing the interdimensional barriers of D4C -Love Train- that hide and protect Funny Valentine and his Stand Dirty Deeds Done Dirt Cheap,[12][14] and it is shown that Tusk ACT4 is impervious, to an extent, to THE WORLD's ability to stop time itself.[15]

Although almighty, the Cavalry Spin is incredibly complicated to use. One must not only have a healthy horse, but also have the expertise to feel when it runs at its natural pace, in addition to the need of being proficient in the Spin and possessing a projectile that can be imbued with the Spin. An imperfect thrown sphere will result in a failure[16] and any interference during the horse mounting, like bumping into an obstacle[10] or the horse being attacked, will completely interrupt the process.[13] During the events of Steel Ball Run, only two people on Earth could reproduce the Golden Spin(these people being Johnny Joestar and Gyro Zeppeli.)

Objects imbued with the Spin have a range of effects on humans, animals, or the environment. However, the energy of the Spin dissipates in the environment, requiring either direct contact or at least closeness to a source of rotational energy to be affected by it.

The Spin is used for a wide range of destructive, defensive, medical, and utilitarian purposes depending on the available tool.

The Spin has been long studied as a human anatomical corrective and medical treatment by the Zeppeli Family, doctors renowned throughout Italy but also royal executioners of the King of Naples. They employ a generalist form of the Spin with Steel Balls thrown at targets, granting them a wide array of uses, although their careers orient them toward affecting the human body.

Interestingly, people are not able to feel whenever they are affected by the Steel Balls. Johnny held a still spinning cork in his hand without realizing it[29] and during their final confrontation, Gyro was able to hit Valentine several times with the Golden Spin and hide its effects, including the tearing off of an ear.[9][11] Targets of the Spin usually only notice the Spin through viewing the body twisting itself, or indirect consequences of the Spin. Gyro explains it as the Steel Ball numbing the senses of the skin and thus stopping the body from feeling the stimulus.

Johnny Joestar utilizes the power of the Spin to generate his own Stand, Tusk. His medium for the Spin is his own fingernails and toenails, using them as projectiles. Almost entirely offensive in nature, Johnny's "nail bullets" are seen as a purely weaponized version of the Spin. As Johnny develops his Stand's power, he also develops more advanced applications of the Spin and his nail bullets within the context of combat.

The royal guards of Naples use a highly specialized and aggressive version of the Spin, using Wrecking Balls instead of simple spheric balls.

Josuke Higashikata's stand, Soft & Wet, uses the Spin to create rotating threads which appear as soap bubbles. These bubbles have a number of abilities, ranging from stealing something's temperature or friction to capturing small objects. After learning of the spinning nature of the bubbles, Josuke is able to harness the Spin to create bubbles “not existing in this world”, generating them from his Joestar birthmark and firing them from his fingertips. These bubbles can overcome the cosmic forces of the universe, and perhaps even lift curses. 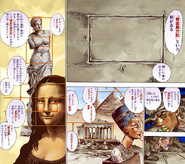