Drowned in a sewage pipe

Eyes of Heaven
The character featured in this article is commonly referred to as "Sports Max".

Sports Maxx is an inmate at Green Dolphin Street Prison and a gangster, as well as a Stand User wielding Limp Bizkit. He cooperates with Whitesnake to complete the latter's plan, and is Ermes Costello's arch-enemy, as he murdered her sister Gloria Costello.

Sports Maxx is a man of average to above-average height and medium build.

He has short, sparse hair in soft spikes; and eyebrows in the shape of large, light circles, tapering into short tails. After transforming into a zombie, his skin becomes paler and his features become more gaunt.

He wears a long, light coat and light pants, both patterned by a dark paisley design.

Sports Maxx has displayed the behavior of a violent gangster prior to entering Green Dolphin Street Prison. After entering the prison, however, he takes up a more respectable façade, sculpting a bird and visiting the graveyard to place flowers. Fittingly enough his hobby is taxidermy.

Maxx originally could only control the reanimated corpses of people and animals around him. But after dying himself, his Stand preserved his body and spirit by allowing himself to exist as an undead zombie. This allowed Maxx to dismember his body without pain or injury while also giving him superhuman strength.

Sports Maxx is a car dealer by profession but is in fact a vicious gangster, having committed over forty counts of various crimes. He murdered a man outside Gloria Costello's restaurant, which Gloria unfortunately witnessed. He proceeded to murder Gloria before dumping her body into a gutter. Ermes Costello discovered Maxx's involvement in the murder and seeks revenge for the murder of her sister. Shortly after, Maxx is arrested but is only found guilty of tax evasion and assault, for which he is sentenced five years at Green Dolphin Street Prison.

At an unknown time frame is he given the Stand Limp Bizkit by Pucci, who notices his potential for evil and has him revive the bone of DIO, which later transforms into the Green Baby after absorbing thirty six prisoner's souls.

He later confronts Ermes after being stalked by her, and is drowned inside a sewage pipe under the result of her Stand's ability. However, he uses his Stand to make himself an invisible zombie before initiating combat against her, and also summons numerous zombies from the grave to aid himself. After a hard-fought fight (which featured Jolyne Cujoh and critically injured F.F.) Ermes defeats Sports Maxx and avenges her sister. Maxx's body is pummeled to the point that his Stand Disc is ejected. Without Limp Bizkit to preserve his zombified state, Maxx crumbles into mush and ceases to exist.

Maxx later returns briefly in the form of a memory through use of Under World to further explain the nature of it to Ermes.

SO Chapter 52 Cover B 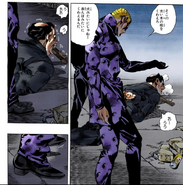 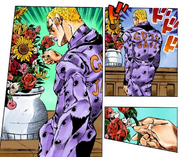 Sports Maxx and a flower, delicately 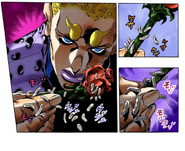