Protect the Boss and eliminate all threats to him

Both shot to death via Aerosmith

Squalo is the more ferocious, ruthless and hot-blooded of the two, while Tiziano is more tactical and level-headed. They are both Stand users and wield Clash and Talking Head respectively.

Squalo wears a dark jumpsuit with studded shoulder pads. He also wears a dark large headband and gloves, as well as three dark armbands on each arm.

Tiziano is a man of slim build and average height, having dark skin and long, straight, light hair.

Squalo is a hot-headed individual, being the most aggressive of his partnership with Tiziano and letting the latter do most of the thinking. Squalo is however adept at using the most of his environment. Squalo is also more prone to panic, especially when he is pursued by Narancia.

Tiziano is a tactical-minded man, keeping track of his target's behavior to advise his partner Squalo. Of the two, he is the most level-headed and attentive. He has a habit of saying "just as planned" whenever something goes his way.

The pair appear to have a deep bond, with Tiziano taking direct hits from Narancia's Aerosmith to save Squalo's life and providing his partner with a source of liquid to use for Clash, that being his own blood. While not outright stated, it is heavily implied that their relationship is romantic in nature, ranging from suggestive dialogue to their very physical interactions with each other. Evidence to suggest a romantic aspect can arguably be seen most during the duo's final moments, when Tiziano sacrifices himself for Squalo and the latter's very distraught reaction to said sacrifice thereafter, indicating that the two meant a lot to each other. After his partner's death, Squalo exclaims to Narancia that he will kill him and then the rest of the traitors, but that his actions no longer have anything to do with his duty to the Boss, instead being made purely in revenge for Tiziano.

Clash is a Stand resembling a shark and functions by manifesting in a body of liquid. The Stand's shape and size varies depending on the volume of liquid it appears in; the more liquid present, the larger Clash can become. The Stand does not appear whilst submerged and cannot leave its liquid for more than a few seconds for an attack. The Stand is able to teleport between close bodies instantaneously within a few meters, so it is very difficult to tell where it could spring from next. However, when Clash disappears back into a body of liquid, it is technically still in said liquid, even though it may not be visible. Hypothetically, if the body of liquid that Clash was present in was moved away from any other nearby liquids, Clash would become effectively trapped, as it is stated the Stand can only return to its User manually.

Talking Head is a small octopus-like Stand, attaching itself to others' tongues and preventing them from telling, or otherwise directly communicating, the truth.

After Bucciarati, Giorno and the rest of the crew (aside from Fugo) betray the Boss, he sends Squalo and Tiziano after them in order to stop them from leaving Venice alive. While eating at a local Venetian restaurant, both Squalo and Tiziano are lurking them from a nearby balcony. Squalo sends his Stand, Clash, on Narancia's soup and attacks him by biting off his tongue. At the same time, Tiziano sends his Stand, Talking Head on his mouth which Giorno is unable to notice when he restores Narancia's tongue. After the attack, Narancia finds that he is unable to tell the truth to his friends as Tiziano's Stand is controlling his speech and movement in a manner that they are constantly contradicting one another.

Misleading his friends to search for the restaurant bathroom, they are unable to find any concrete evidence on who is attacking them. Giorno then realizes that Narancia is not able to tell the truth and starts suspecting that he is under an enemy Stand attack. Before being able to do anything about it, Giorno is suddenly attacked by Clash which pulls a fast sneak attack on him from the bathroom's watery floor. Narancia tries to save him but is unable to do so because Giorno is on Aerosmith's line of fire.

Pulling Giorno to the sewer network beneath the restaurant, Narancia's Aerosmith follows Clash and finds it through its carbon dioxide radar. Squalo, injured by Aerosmith's firing, forces Clash to exit the sewer and into an aquarium tank within the restaurant floor. Despite this, Clash has not given up on Giorno as it still has its fangs locked on to his neck. Managing to separate Clash from Giorno's neck, Giorno urges Narancia to go and find the host instead of trying to kill the Stand. While Bucciarati and the rest are busy keeping Clash separated from Giorno, Narancia goes to the street to find the user.

Narancia then finds injured Squalo being helped by Tiziano in a crowd of pedestrians by detecting Squalo's heavy breathing. Having cut off his tongue to incapacitate Talking Head, Giorno's ladybug is transformed into a new tongue by Giorno's Gold Experience. Tiziano is then shot to death by Aerosmith who takes the bullet for Squalo in order to provide him with enough liquid to retrieve his Clash. Seeking revenge for his lover, Squalo and Narancia are engaged in a stand-off which he ultimately loses despite trying to tear Narancia's throat with Clash. Narancia then finishes off Squalo, managing to separate Clash from his neck.

Squalo and Tiziano at work: the "daily grind"

After Squalo is injured, the two hide and plot out their next strategy 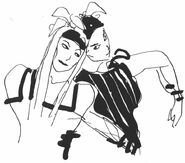 A drawing of Squalo and Tiziano.

Squalo in the Anime

Tiziano in the Anime

Squalo enraged at his partner's demise.

Squalo promised to kill Narancia and others.

Lifted into the air by Aerosmith...

...And hit by a barrage of bullets from Aerosmith.