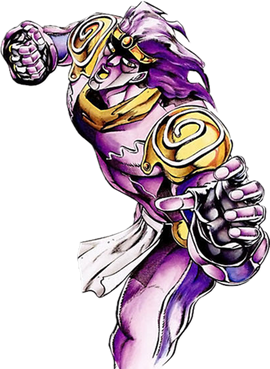 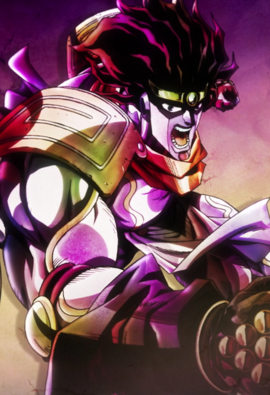 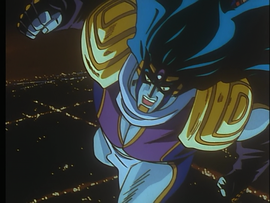 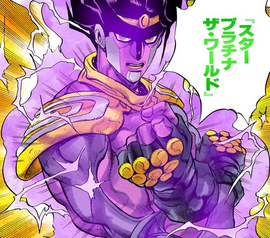 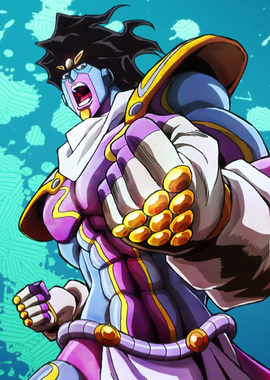 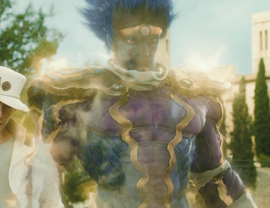 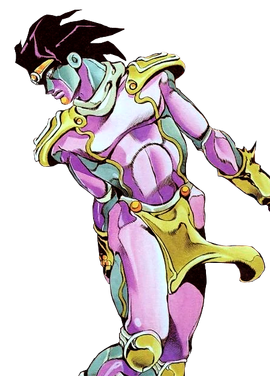 SC Episode 1 - A Man Possessed by an Evil Spirit

Among the very first Stands introduced, it is featured along with Jotaro in three parts of the series, most prominently in Stardust Crusaders.

Star Platinum is a humanoid Stand, resembling a tall, well-built man of similar proportions to Jotaro, if not more muscular. In colored art, its skin is often a hue between purple, blue, green, and small bits of gold. Its face and body have varying colors.

It has long, flowing hair with a darker shade above its eyes and on the bridge of its nose, blurring the distinction between its hair and head. The spaces under its eyes and on its cheeks and chin are a darker color and divided clearly from the space around its nose and mouth. It wears a cap on its chin, and a metallic headband in three pieces, the central piece of which is shaped as a vertical ellipse. Initially, its facial features were very similar to Jotaro's.

A wavy line runs from each arm to the front of its torso, continuing down its legs. It has a minimal range of clothing and armor, including a short, circular scarf, shoulder pads with a spiral design, long gloves with studs on the back, knee and elbow guards, a loincloth, and short boots (which became knee-length as of Part 6).

Star Platinum was designed to look like a guardian spirit. Its shoulder pads resemble the ones worn in Hokuto no Ken (Fist of the North Star). The spiral patterns symbolize the Ripple and the concept of infinity.[1]

In the anime and film adaptations of Part 4, all of Star Platinum's clothing, such as its red scarf and black gloves, become white, reflecting Jotaro's own transition from black to white apparel. Its darker purple highlights, such as those under its eyes, also become a sky blue color.

Jotaro has described Star Platinum as very violent. It is silent, except when it throws punches, during which it cries "ORAORAORA" loudly and repeatedly. With a relatively human face, it may scowl and smile. It has a very malicious grin when it is first revealed.

Star Platinum demonstrates a sort of interest in self-preservation, as seen when it halts a bullet Jotaro experimentally shoots at his own head,[2] protects an incapacitated Jotaro from DIO's attacks during Time Stop, and revives him from near-death by directly pumping his heart[3] (however, considering Star Platinum's pioneering role in the series, this capacity may speak primarily to the metaphysical or subconscious qualities of Stand users).

In the original manga, Star Platinum, early on, is seen with a wide, disconcerting smile. Later on, Star Platinum gains Jotaro's stoic visage, with its future smiles only serving to warn the person the smile is aimed at of an imminent beating.

Star Platinum is named after the TarotW card The StarW, which symbolizes optimism, discernment, and hope.

Star Platinum is a close-range Stand, with a basic reach of only 2 meters from Jotaro's body, but with incredible strength, speed, and precision.

It is one of the most powerful Stands featured in the series. Its overwhelming physical prowess in every basic characteristic, save for range, coupled with Jotaro's own cleverness in combat, allows Jotaro to repeatedly prevail against many Stand users even without the usage of any special ability. In addition, Jotaro's discovery of its time-stopping ability only made it all the more formidable in combat.

During the final battle with DIO in Stardust Crusaders, Star Platinum awakens the ability to stop time. The technique is referred to by Jotaro as Star Platinum: The World (スタープラチナ ザ・ワールド, Sutā Purachina Za Wārudo), a reference to the late antagonist.

When activated, Star Platinum is able to halt the flow of time for a brief moment, causing everything around him to appear frozen in place. During this time-lapse, Jotaro is able to interact with any object or person within his range. Measures of time during Time Stop correspond to normal measures, as shown by Jotaro's unwilling reduction in the duration of Time Stop affected by Made in Heaven. He is unable to use the ability consecutively, requiring a few seconds in between each usage.[14]

In Jotaro's prime, the ability lasted 5 seconds,[15] but decreased over time due to neglect from its user. Ten years after its initial use, Jotaro is only able to stop time for half a second,[16] but eventually extends it to 1-2[17] seconds throughout the later half of Diamond is Unbreakable.

In Stone Ocean, the Stand is given the official name, Star Platinum: The World,[15] as well as stats that differ from the original Star Platinum. Despite a significant downgrade to the Stand's persistence, Jotaro increases the duration of the time stop from 2 seconds[18] back to its original 5 seconds[19] during the face-off at Cape Canaveral.

The information below derives from a source not written by Araki. As such, it may or may not be considered canonW.
SPOILER WARNING: Part /Game Spoiler details may follow.

In the story mode of the game Eyes of Heaven, Jotaro eventually comes face to face with Heaven Ascension DIO, the mastermind behind the multiverse plot. As their fight went on, Star Platinum and The World's same-type aspect came into play once more, enabling Star Platinum to learn The World Over Heaven's signature ability: Overwrite Reality.

This grants Star Platinum the same potentially limitless ability to rewrite time and reality itself, the only true limitation being that it requires the use of its hands to do so. Despite these changes, Star Platinum does not gain an appearance change, unlike The World Over Heaven.

As a result of its powers, all of the anomalies disappeared after the death of Heaven Ascension DIO. The world reverted back to normal and Jotaro lost his Over Heaven power.[20] 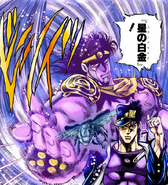 Breaking all of High Priestess' teeth 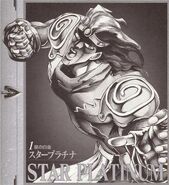 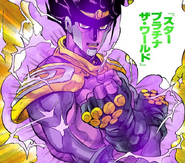 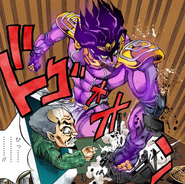 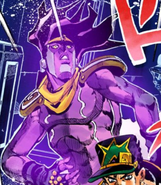 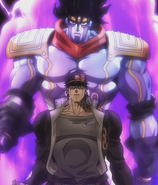 Star Platinum with the tarot card "The Star"

Star Platinum's statistics as represented in the anime

Jotaro and Star Platinum with the tarot card representing "The Star"

Star Platinum and its master

The Jaguars, consisting of a team of Star Platinums

Jotaro and DIO face off 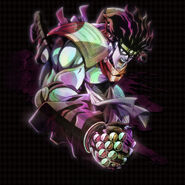 Promotional art for Star Platinum in the anime

Concept art for the OVA

Star Platinum's appearance in the OVA.

Defending from a volley of Crazy Diamond's punches.

Star Platinum about to throw a punch.

Catching one of Ratt's flesh-melting barbs.

Giving the finishing blow to Kira. 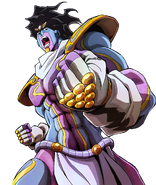 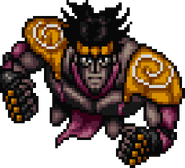 Star Platinum alongside Jotaro, as they appear in Heritage for the Future

Star Platinum as it appears in All Star Battle

Star Platinum and Jotaro in All Star Battle

Jotaro and Star Platinum in the announcement trailer for Jump Stadium 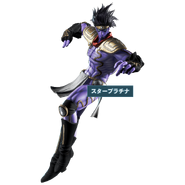 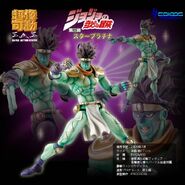 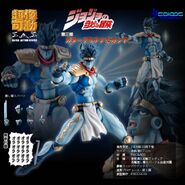 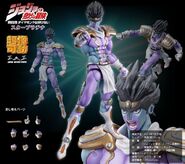 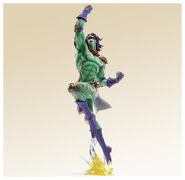 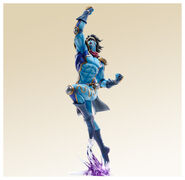 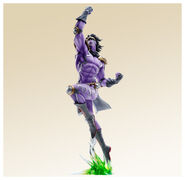 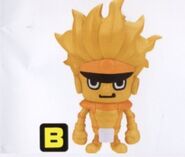 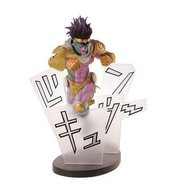 Jotaro and Star Platinum in the commercial for JoJo's Bizarre Adventure: The Real 4-D