Stardust Crusaders (スターダストクルセイダース, Sutādasuto Kuruseidāsu) is the third part of JoJo's Bizarre Adventure, serialized in Weekly Shōnen Jump from March 1989 to April 1992. The arc is preceded by Battle Tendency and spans 152 chapters.

From 1988 to 1989,[1] the story follows Jotaro Kujo and his friends as they journey from Tokyo to Cairo, Egypt, to save the life of his mother, Holy Kujo, by defeating his family's resurrected archenemy, DIO.

Jotaro travels with his grandfather, Joseph Joestar, as well as Muhammad Avdol, Noriaki Kakyoin, Jean Pierre Polnareff, and Iggy. The group fights several of DIO's minions and Stand users along the way.

Volumes are published in English by VIZ Media, and in Italian by Star ComicsW.

Stardust Crusaders was the first part to be officially released in English. The series is edited by Jason Thompson, author of Manga: The Complete GuideW.

Some names were altered for the English release, presumably for copyright reasons. Additionally, the character Devo was changed entirely.

Minor edits were made to artwork where certain scenes of animal violence were redrawn by Hirohiko Araki for the English release. Japanese volume 15 (English volume 3) featured a single panel of a dog being decapitated which was redrawn from an alternate angle, and Japanese volume 18 (English volume 6) has several redrawn panels where a mutilated dog was changed into a large rat.

Due to a controversy regarding one scene involving DIO apparently reading the Qur'anW in the OVA, Viz Media and Shueisha paused publication for a year, even though the manga did not feature that specific scene. However, Shueisha had Araki (or his assistants) redraw scenes that depicted characters fighting on top of or destroying buildings resembling mosquesW. Viz resumed publication on April 7, 2009, with Volume 11. 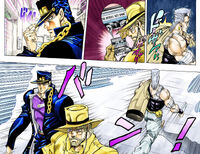 Original "The End" page for Part 3: Joseph, Jotaro and Polnareff return to their respective countries

Current "The End" page for Part 3: Joseph and Jotaro on board a plane to Japan.