A Stand User using the microscopic Lovers, Steely Dan is sent to assassinate Enya the Hag and then confronts the Joestar Group in Pakistan.

Steely Dan wears a shirt with an open chest, going lower past a belt with a loincloth-type extension over his groin. The shirt has long sleeves that are a darker color than the rest, matching his pants. He has dark, shoulder-length hair that frays out on the sides. He has multiple irises with a ripple pattern on his eyes. His eyebrows are segmented, taking the shape of dotted lines.

When he shows himself in front of the Joestar Group, Steely Dan is particularly smug and shows great confidence in his Stand. He cruelly kills Enya, telling her to her face that DIO ordered her execution which shook the old woman. Steely Dan subsequently takes Joseph hostage and proclaims the intention of destroying each of the heroes' brain one by one, exhibiting great confidence in his Stand's microscopic size and thus its ability to avoid being attacked.

Steely Dan is greatly callous, punching a child for mildly hitting him with a stick which he asked. When he forces Jotaro to become do his bidding, Steely Dan takes pleasure in constantly humiliating the student, gratuitously hitting him, using him as a decoy to be beaten while he steals some jewelry, also enjoying to remotely torment Joseph through his power.

Although he has confidence in Lovers, the moment Steely Dan finds himself at a disadvantage, he tries to flee and later to openly beg for mercy. To gain some time, he even goes as low as licking Jotaro's shoe. At the same time, he attempts two underhanded tactics to invade Jotaro and then take a child hostage, still begging when his tactics are foiled.

Steely Dan's Stand is Lovers, a microscopic Stand which can infiltrate someone's brain and returns any pain that Dan feels manifold to its current victim.

Dan first appears as a Kebab salesman and haggles Joseph into spending 300 yen more than what he usually sells it for. Later Steely Dan confronts Jotaro Kujo and his friends in Pakistan. He first executes Enya to silence her, earning the rage of the four men at the time. Regardless, Steely Dan remains calm, mocking Jotaro by saying that he would not be able to touch him. However, Steely Dan is punched in the gut by Jotaro anyway, at which point Joseph Joestar also flies back. Steely Dan takes the opportunity to explain the abilities of his Stand and pays a child to hit his leg with a broomstick to prove his point.

Steely Dan announces that he will kill Joseph if he is physically assaulted once more. Kakyoin and Polnareff would not take any chances of killing Steely Dan and Joseph. This enables him to force Jotaro to obey his whim, and he punches Jotaro and hits him with a rock. Subsequently, he forces Jotaro to follow him and involves him in a number of actions at his expense, taking his money, forcing him to use his body as a bridge for him to cross the ditch, and wiping his shoes, among other actions. It is around this point that Steely Dan realizes that Polnareff and Kakyoin have shrunk their Stands to combat his. However, shortly after Steely Dan steals an expensive bracelet and forces Jotaro to take the blame, he finds his head injured thanks to Hierophant Green's attacks, and is forced to remove his Stand from Joseph's brain.

Upon realizing this, Steely Dan attempts to run away, but is abruptly stopped by Jotaro. Steely Dan then tries to buy time by sucking up to Jotaro and attempts to have his Stand enter Jotaro's ear. However, Jotaro had anticipated this and stops The Lovers with Star Platinum's precision, and subsequently uses it to crush his arm and leg. After Lovers is released, however, Steely Dan attempts to force it to enter the ear of a young girl nearby, but now it is stopped by Hierophant Green who had gotten a tentacle on Lovers that ties it up and pulls it away. Shortly after, Jotaro pays back Steely Dan for his previous actions, using Star Platinum to barrage him and send him flying into a nearby building.

Steely Dan, or rather Lovers is one of the bosses featured in the game. In India, after the group defeats Enya, she declares that Joseph is infected with a Lover's seed. The group must then head to the local Speedwagon Foundation office to use a TV set and see Lovers inside of Joseph's brain.

Jotaro, Polnareff, Kakyoin, and Avdol send their Stands to battle Lovers which is eventually defeated.

Steely Dan (Written as "S-Terry Dan" in the localized PSX port") is an enemy in the PSX port's Super Story Mode. His chapter features a special minigame set inside Joseph Joestar's head, where the player controls both Hierophant Green and Silver Chariot and attempt to destroy Lovers. The minigame plays like a side-scrolling shooter similar to R-Type.

After said minigame is beaten, Steely Dan is punished by Jotaro in a cutscene afterward. 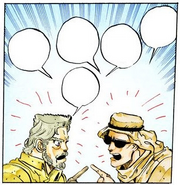 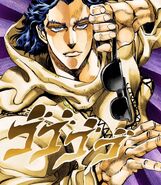 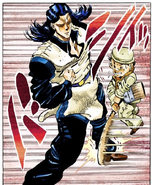 Steely Dan pays a child to hit him with a broom

With his tarot cardW, The Lovers 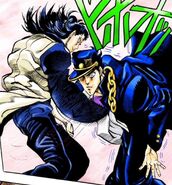 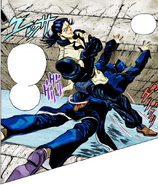 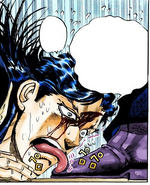 finished off by Star Platinum 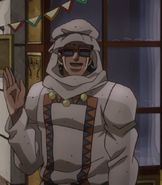 Getting hit by Star Platinum 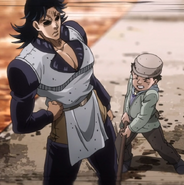 Steely Dan pays a child to hit him with a broom

Hitting Jotaro with a rock

Paying his dues at the hands of Star Platinum