Stone Free is a humanoid Stand of a height and build similar to Jolyne's.

It wears what appear to be a pair of sunglasses varying in darkness, obscuring vertically ridged eyes. Four blade-like protrusions run over its head from the top of the jaw to the back of its neck, bordering the sides of both eyes. Cones truncated at a length of one-third the width of its head protrude from the region of the ears.

It wears elliptical shoulder pads with a snakeskin pattern, and hexagonal knee pads. Several patches of its lightly-shaded body reveal a fibrous interior, wound horizontally. Its forehead, neck, arms, and the area from its midriff to the top of its feet bear small, evenly spaced studs/bumps.

Composed of string, when unraveled its texture is like silk, apparently smelling of soap.[2]

Stone Free is a unique close-range Stand that can not only be summoned to fight, but also provides Jolyne with integrated abilities. Like her father's Star Platinum, Jolyne's Stone Free is both powerful and fast, making it great for fighting physically. Moreover, its string power gives it great versatility that allows Jolyne a wide array of actions in combat.

When Stone Free's string is completely wound or compacted, it is very strong; the destructive force of its punch roughly equivalent to that exerted by a small, extremely fast meteor.[2] It is also fast enough to deflect several bullets aimed at it.[3]

Stone Free enables Jolyne to unravel her body into string, typically beginning with her hands,[4] and freely manipulate it.[5]

Stone Free's string is invisible to non-Stand Users[5] but it is portrayed inconsistently. It is also sharp as it can slice through flesh when pulled violently enough.[4] On the other hand, the string is not particularly strong and may snap if strained too much,[5] although Jolyne can create a stronger rope out of several strings. With enough precision, the string can pickpocket small objects that way.[6] The string can contract and expand like muscles, allowing Stone Free to control the grip a string has. It has also been shown that as Jolyne's body is the part that turns to string, she is able to physically touch and harm stands, holding some physical properties of being her own stand.[7]

If Jolyne gathers the string and meshes it, she can concentrate her power and form Stone Free's humanoid appearance, who may fight in her stead,[8] but Stone Free's range is shortened to around 2 meters.[9] Stone Free, composed of strings, can naturally be unraveled too.[10]

Jolyne may unravel around 70% of her body harmlessly, as well as quickly rewind. It notably allows her to be supernaturally flexible and be able to hide in cramped spaces like someone's mouth.[11] At harm to herself, Jolyne may also cut her string for a further variety of applications. Stone Free's maximum range, unraveled to 70%, is about 24 meters, as long as the string's length.[2][12]

Stone Free's string manipulation makes it exceptionally versatile in battle. With the string, Jolyne is able to:

Stone Free in All Star Battle

Stone Free in Eyes of Heaven 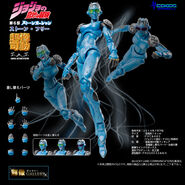 Stone Free with Jolyne in "JoJo ~Sono Chi no Sadame~"