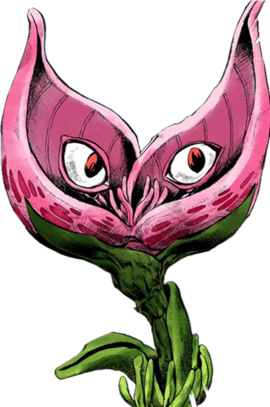 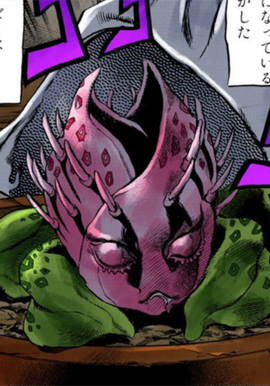 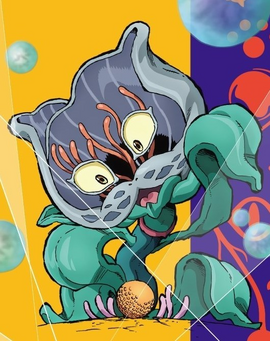 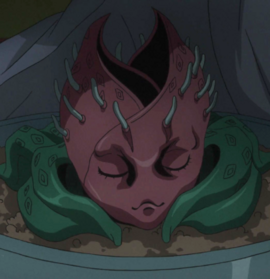 Stray Cat (ストレイ・キャット (猫草), Sutorei Kyatto) is a Stand appearing in Diamond is Unbreakable after Tama died and was later brought back to life when its Stand activated where it was buried.

Stray Cat is a Stand bound to a plant shown having a thick stem for its body and big leaves that operate like arms. Its leaves are dexterous enough to grab objects. It waits until a potential target is in range, then suddenly catches it. Two petals with a pattern of long, dark spots on them are wrapped into a feline shape for the face. The plant has eyes that can still move around and look at things, but it lost the night vision of a cat. Behind its eyeballs are "whiskers" that curl up when Stray Cat uses its ability.

Scratching behind its "ears" (the tips of the petals) causes them to twitch. As a cat, its forehead was narrow but it is now broad. It has two small holes that act as its nose, which allows Stray Cat to take in air to smell. Below its nose is a mouth which it uses to eat, drink, lick, and make many cat-like noises.

While it no longer possesses a spine or any other bones, it still reacts to petting in the middle region of its stem. However, rubbing its "stomach" area while it is feeding will cause it to vomit.

Whenever it remembers having a tail, its hind leaves begin to sway unconsciously. Stray Cat's roots exist solely to support its body, and do not function like a normal plant. They don't extract nutrients or water from the soil. Instead, its excrement is released directly into the soil and attracts bugs toward it.

Its facial design changes shape to become more vicious when it is re-introduced in Chapter 423, due to its growth as a plant. As it has grown, the petals now overlap each other which gives it it a rounder head shape, and the whiskers protrude outward from its head. The upper areas of the petals and leaves also have an altered pattern of dark spots, as the spots are now smaller and have circles within them.

In the colored manga, Stray Cat has pink petals. In the anime, it now features grey petals.

Stray Cat's personality has similar characteristics as any normal cat since the Stand is a reincarnation of Tama.

Like all cats, Stray Cat has a hunter instinct and is seen chasing after insects, thrown pieces of paper and birds.[3] It is proud of its former fur and tail.[3] It loves running and jumping but cannot do so as a plant.[3] Stray Cat likes tuna, shrimp, sticking its head in paper sacks, watching TV, and being praised. Like all cats, it dislikes direct eye contact, having its nose blocked, cigarette smoke, wasabi, oranges, and being cold.[4]

At first unaware that it is a plant, it soon learns its predicament and hates Shinobu Kawajiri all the more for it.

Stray Cat is vindictive and aggressive, and the acquisition of its power makes it confident in his ability to fight anyone.[5] It considers anyone who hinders it to be an enemy and will seek to eliminate them with its bubbles, be it Yoshikage Kira protecting Shinobu from it,[6] Hayato Kawajiri trying to close the window on the plant,[7] or anyone giving the impression of attacking it. Kira uses that aggressiveness to his advantage against Josuke Higashikata.[8] Stray Cat is also vicious, as seen when it tries to kill Kira by pushing a bubble into Kira's bloodstream and his heart.[6] It bears a deep grudge against Shinobu, who hit him with a broom[3] and will attack her on sight.[5]

It retains its laziness as well from when it was a cat. For its winter plans, it's stated that although it wants to stay active, Stray Cat plans to sleep a lot under the kotatsuW.[7]

Despite its simplicity, Stray Cat's air power is a surprisingly deadly ability. Its cat-like nature makes it an unpredictable and ferocious Stand user in combat, but it is limited by its plant-like body.

The first witnessed ability of Stray Cat is to resurrect its former user, Tama the cat, into a plant after it dies. Stray Cat keeps its personality and memories but has now the body and needs of a flower.

Stray Cat, being a sentient flower, possesses cat-like and plant-like properties. It still has eyes, a nose, and a mouth to examine its surroundings with. Moreover, its activity and power is directly linked to sunlight, as it depends on photosynthesisW. Despite this, it still has a need to breathe in oxygen in order to survive, rather than completely relying on this photosynthesis. In direct illumination it is quite powerful, but conversely is very weak at night.[4] When completely without light, the Stand enters a dormant state and can be easily subdued.[7]

Stray Cat has the ability to control the surrounding air[6] with its whiskers.[4]

Stray Cat's main usage of this ability is to make invisible bubbles of compressed air and shoot them toward its targets, but can also shield itself from attacks. It is initially shown to curl up its petals to do so, but that quirk disappears afterward.[6]

The bubbles are durable enough to block Killer Queen's kick[6] and even Crazy Diamond's punches[8] and when shot, have enough force to severely wound somebody or kill them at point-blank range;[9] if it feels particularly vicious, it can even force a small bubble inside one's bloodstream and try to cause an embolism. When they hit, a cat's pawprint is visible inside the impact zone. They are also invisible and can be remotely burst by Stray Cat if it wishes.[6] However, the bubbles can be popped like a balloon.[7]

Stray Cat is also capable of morphing the air bubbles it creates into different shapes as well. It binds Hayato's neck and arms in mid-air by compressing its air bubbles to be shaped like cuffs.[7]

In addition, Stray Cat can create a void of air around it. It instinctively used this ability to block the explosion of Killer Queen's bomb.[5]

Stray Cat's control over the air increases as it gets more sunlight, which gives it more energy. When illuminated, the air control is quite strong, but it weakens in the dark.[4]

Stray Cat is the Stand of Tama, activating after its user's death. Wanting revenge for its death, Stray Cat attacks Shinobu, and Yoshikage Kira after seeing him trying to protect her. After almost killing Kira, it is distracted by a golf ball and starts playing with it, which allows Kira to keep him under control for a while. Kira eventually decides to hide Stray Cat in the attic of his house, deciding it could be useful in the future. It remains asleep as there is no light in the room. However, it is found by Hayato, who opens the window and is then attacked by the Stand, but manages to escape.

Stray Cat eventually allies itself with Kira and is subsequently referred to by its Stand's name. After the effects of Bites the Dust are deactivated, Kira places Stray Cat in the gap in Killer Queen's abdomen and combines its abilities with his Stand's in order to create bombs from the balls of air manipulated by Stray Cat. After Kira is defeated and dies, Stray Cat goes to live with Okuyasu's father, and is shown to get along well with its new owner. 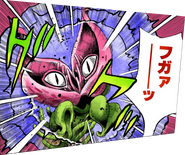 Suppressing an explosion from Killer Queen. 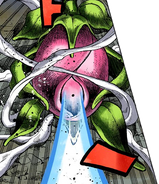 Envelops itself in an air bubble to protect itself. 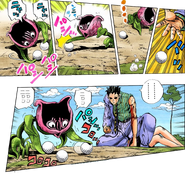 Distracted by a golf ball.

Hayato held in mid-air with its powers. 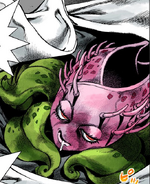 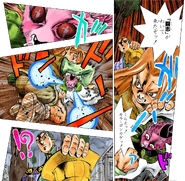 Stray Cat in the gap in Killer Queen's abdomen. 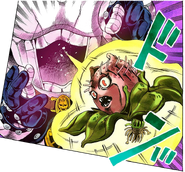 Dragged away from Killer Queen by The Hand.

Living happily with his new owner.

Stray Cat tries to jump, but is stuck to the ground in its new body.

Stray Cat realizes its power after killing a bird.

Suppressing an explosion from Killer Queen.

Surrounds its body with an air bubble to protect itself.

Stray Cat dances happily and teases Kira after showing off its power.

Stray Cat plays with a golf ball thrown by Kira.

Dormant due to the lack of sunlight.

Hayato Kawajiri unveils Stray Cat with the intent of using it to kill Kira. 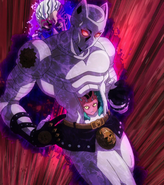 Stray Cat revealed to be within the hollow stomach of Killer Queen. 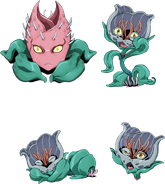 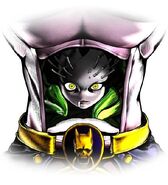 Stray Cat as it appears in All Star Battle 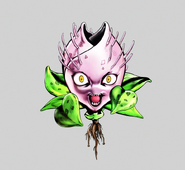 Stray Cat as it appears in Eyes of Heaven 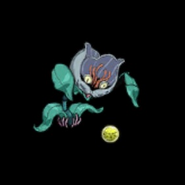 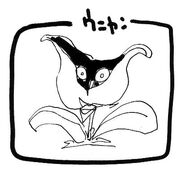