Strength (ストレングス（力）, Sutorengusu) is the Stand of Forever, featured in Stardust Crusaders.

Inspired by the famous merchant brigantine, Mary CelesteW,[1] Strength is a Stand bound to a small yacht, which is then transformed into a gigantic derelict freighter named "Big Daddy".[2] As a massive ocean liner, it is the largest Stand ever seen.

It has absolutely no will since Forever has absolute control over it. It represents the Tarot Card StrengthW, which symbolizes a challenge to fight, a strong will and hidden potential.[3]

Disguised as a freighter, Strength is a very powerful Stand bound to take its enemies by surprise and it almost killed the entirety of the Joestar Group at once.

However, it is burdened by the cockiness of its user, Forever, who likes to brag and thus expose himself to retaliation.

Strength is capable of binding itself to a small boat and transforming it into a gigantic freighter.[4]

While Strength is bound to an object, Forever gets unquestionable psychic control over it. Even objects, such as electrical cords, bolts in the hull, and the very floors and walls themselves are bent and twisted to the beck and call of Forever's will. This power can be used to surprise attack those who board the yacht and also allows Forever to travel through the ship's walls and floor as if they were liquid.[3][5] 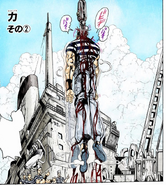 A sailor hooked by one of Strength's pulleys 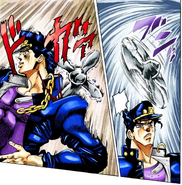 Jotaro attacked by one of Strength's fans

The Joestar group trapped and sinking into the floor 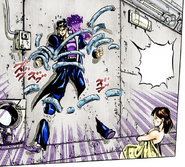 Strength crumbles as its user dies 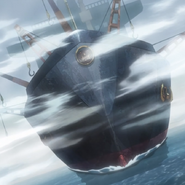 The Joestar group trapped and sinking into the floor