Super Fly (スーパーフライ, Sūpāfurai) is the Stand of Toyohiro Kanedaichi, featured in Diamond is Unbreakable. It is bound to an electrical pylon.

Super Fly is a Stand automatically bound to a huge electrical pylon, so it can be viewed by non-Stand users. Super Fly is completely autonomous, since its user doesn't have any control over it. Toyohiro noted that even if he died, the Stand would continue to exist, similar to Notorious B.I.G or Anubis.

Super Fly is an automatic Stand that imprisons its user, Toyohiro, inside it, making it a nuisance. Its power of damage reflection means that it is powerful and invulnerable, but anyone is free to exploit the pylon when fighting inside it.

Super Fly's defining ability is that it imprisons one occupant inside it.[2] It is mentioned that the energy of the sole prisoner is how it sustains itself.[3]

Toyohiro is the first prisoner of the tower and cannot leave until someone else steps in it. If that happens, the first of the two to exit the tower is free to leave while the other one must stay inside. Leaving the tower only requires not standing inside the structure, thus Toyohiro could hang on the side of Super Fly while Josuke was trapped.[2]

If the victim attempts to escape it, they will be covered in steel to restrict their movements. It is possible the victim could be perpetually covered if they do not pull themselves back in time and Toyohiro claims that any would-be escapee will be absorbed into the tower.[2]

To protect itself, Super Fly absorbs and reflects any damage done to its structure and back at the attacker.[4]

If attacked anywhere, be it one of the pillars or even one of the cables connected to it,[3] the tower absorbs the energy of the aggression and redirects it back to the direction it came from. A Stand's punch can be reflected in the form of a metal copy of the Stand bursting out of the damaged zone and retaliating against the aggressor, but generally, the damage is reflected in the form of energy blasts.[4] Additionally, any foreign object inserted inside the tower is also violently ejected.[3]

Furthermore, if the energy blasts hit the tower itself, they simply rebound against it until it hits someone or the energy escapes.[5]

Toyohiro takes advantage of this ability offensively: by damaging the tower at specific angles, he can direct the repelled force toward an enemy as a ricocheted attack. Through this method, he was able to pin Mikitaka Hazekura to a beam by hammering in screws, which were then repelled back out and into Mikitaka,[3] or make scratches on the structure which fired back toward Josuke and hit him after several rebounds.[5] 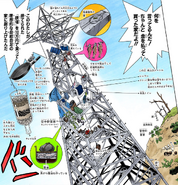 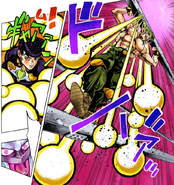 Toyohiro's setup on the tower.

The tower spraying Josuke and Okuyasu with toilet water.

Super Fly being punched by Josuke and Okuyasu.

Super Fly damaged from their attacks.

Reflecting a replica of The Hand back at Okuyasu. 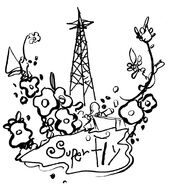