Sticking its head in paper sacks, watching TV, being praised[2]

DU Episode 29 - Highway Star, Part 2
Tama (タマ, Tama) is a minor character featured in Diamond is Unbreakable. Originally a street cat hit by the Arrow, Tama is taken in by Yoshikage Kira after becoming a plant-Stand hybrid named Stray Cat.

Tama is a blue-grey furred British Shorthair cat with honey-gold eyes whose most defining characteristic is a gaping hole in its throat caused by the Arrow.

Stray Cat allowed Tama to resurrect itself into a sentient plant that retains Tama's intellect and personality. It also allowed it to manipulate the surrounding air and form air bubbles to shoot at enemies.

Tama is stubborn, sticking to its territory in the cellar when Shinobu Kawajiri attempts to chase it out. After it is killed, it shows a desire for revenge and attacks Shinobu when it sees her in the garden. It is friendly toward Kira until Kira himself deems the newly resurrected Stray Cat a threat. However, it is able to easily forgive Kira, and allies itself with him. Tama is shown to get along well with Okuyasu's father after Kira's death.

Tama was once a normal cat that was hit with an Arrow while peacefully lazing about by a tree. It takes refuge in the cellar of the Kawajiri household where it is killed by a broken glass bottle when Shinobu Kawajiri tries to chase it out. After being buried in their garden, its dormant Stand ability brings it back to life as a cat-like plant named Stray Cat.

Tama wary of Shinobu when she tries to approach it.

Tama surprised by Shinobu's silly act of being submissive.

Tama swats away a brush thrown at him with his tail.

Tama jumps onto the ceiling to dodge Shinobu's attack with the broom. 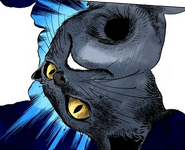 The hole in Tama's neck from the Arrow.

Tama's death when he is impaled with glass shards.

Tama's initial appearance in the basement of the Kawajiri family's house.

Tama sitting on the potato sack in the cellar.

Tama annoyed from Shinobu threatening it.

Tama yawns in preparation to sleep, not caring about Shinobu's threat.

Tama swats away the brush Shinobu throws at him using his tail.

Tama jumps onto the ceiling to dodge Shinobu attacking him with the broom.

The hole in Tama's neck from the Arrow.

Tama's death after being impaled by glass shards.