Tamami Kobayashi (小林 玉美, Kobayashi Tamami) is a side character featured in Diamond is Unbreakable.

Tamami is a petty scammer who tries to swindle Koichi but is eventually neutralized. He subsequently becomes a minor ally and works legitimately as a debt collector. His Stand is The Lock.

In the manga, he has two distinct appearances, with one turning into the latter by the end of his mini arc.

Tamami initially appears as a tall and intimidating man. With pronounced epicanthic folds, he wears hair of dark to medium tone combed in the manner of a pompadour into a sort of thick helmet; and he has a small cross-shaped scar beyond the bottom-left corner of his mouth.

Throughout the Koichi Hirose (Echoes) story arc, Tamami is seen gradually shrinking. By the end of the arc, he is around Koichi's height and retains this height for the rest of Part 4.

In the anime, Tamami is always portrayed as short in stature. He instead wears a light purple shirt, containing the flags of Switzerland and the Netherlands on both sides of his collar, along with a flag of the United Kingdom on the front of his shirt, while having the flag of the United States on the back. Tamami also wears a yellow tie, a green belt, and brown pants.

Tamami is a con artist who deceives people for money and describes himself as the "Well Known Boss Tamami". He mentions that even his parents wouldn't believe him. He hates violence, so his Stand made his efforts to steal money much easier. After his defeat, he starts working taking back loans for casinos and the mafia, apparently by making people feel guilty if they don't pay.

Tamami's Stand is The Lock. When activated, it grows a physically heavy lock from the chest of its targets when Tamami is able to have them experience the feeling of guilt.

Tamami received his Stand 4 months before the events of Part 4 from Keicho Nijimura. He proceeded to use his ability in conjunction with his own skill as a conman in hopes of gaining wealth and never have to work again.

Tamami is introduced as a confident trickster who leads Koichi Hirose to believe that he had run over Tamami's cat with his bike – supposedly hidden in a bag which then splattered with blood. Despite that odd circumstance being questioned, Tamami demands a sum of money from Koichi as compensation for the deed. He successfully pressures Koichi into feeling guilty, which puts his Stand, The Lock, into action - appearing in the shape of a lock; clasping over Koichi's heart and growing the more guilty he feels.

As he is bullying Koichi, Josuke and Okuyasu turn up and try to help their friend. Okuyasu punches Tamami, breaking his teeth; and after Tamami cries, feels guilty for it – which gets him a lock around his heart as well. Josuke then reveals that it was just a doll instead of a cat that was hidden in the bag and heals Tamami, thus freeing Koichi and Okuyasu from their guilt and Tamami's Stand. Tamami returns the money he had taken from Koichi but vows to get revenge. Koichi is shocked to see that Tamami had only given Koichi back the corners of the yen with his wallet, as Tamami is seen holding the remains of the bills.

When we next see him he is at Koichi's house, talking to his mother. He explains that he is there to return Koichi's wallet and claims that Koichi has intentionally switched it with his, as Tamami's holds 500,000 yen. When Koichi's mother doesn't believe him, he tells her that there is a stub of a restaurant he went to inside of the wallet Koichi holds. His words were proven true thanks to a trick, leading Koichi's mother to feel guilty about her son and giving Tamami an opportunity to place The Lock on her.

Koichi, enraged, attacks him, leading in Tamami revealing he also made his sister feel guilty as well to Tamami's advantage. Tamami deceives Koichi's two family members into feeling guilty further, causing them to fall under the highest level of The Lock's power – severe enough to have them attempt suicide.

Finally, Koichi manages to convince his mother that he is innocent of the crimes Tamami had framed him of, by using his Stand Echoes to amplify his plea for her to believe in her own son's words. This destroys the Lock and Tamami knows he has been defeated.

From then on he respects and fears Koichi and even takes to calling him Boss Koichi.

Later in the story, Tamami appears to give Josuke and Koichi information on another Stand user: Toshikazu Hazamada, but doesn't go investigate with them.

He later encounters Toshikazu and Surface but thinks the Stand is actually Josuke (due to Surface taking his form) and is attacked by surprise. Tamami is knocked out by a brick and Toshikazu hides his body.

Taken to the hospital by unknown means; the hit was so hard that Tamami, after leaving the hospital, can't even remember what happened to him.

I Am an Alien

Tamami briefly takes on the role as a juror when Josuke and Rohan gamble against each other during the dice game "18", instructed to use his Stand on Josuke to see if he's cheating. Rohan's house catches fire before Tamami can discover Josuke and Mikitaka Hazekura's trick, but he charges Rohan for his services nonetheless.

Tamami briefly appears to ask for Rohan's autograph along with Akira Otoishi, saying he's a fan of Rohan's work. Both are scolded by Rohan's editor Minoru Kagamari, who tells them that Rohan is busy at the moment. However, Rohan scolds Kagamari back, saying to not treat him like slow mangakas who can't quickly sign an autograph and proceeds to use a dripping technique to sign the autographs with his own coffee.

Taking Koichi's money for sneakers and telling him to "go barefoot" 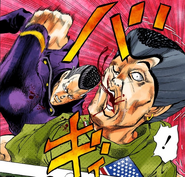 Losing a tooth because of the punch 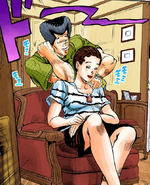 Tamami in Koichi's house, giving his mom a massage

Claiming to Koichi's mom that her son stole 500,000 Yen from him 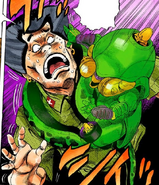 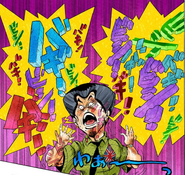 Tamami's ears are assaulted by SFX 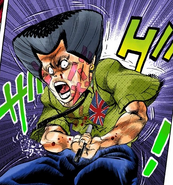 Stabbing himself in order to trick Koichi's mom

Tamami defeated by Koichi; drawn shorter after their confrontation

Knocked out by "Josuke" 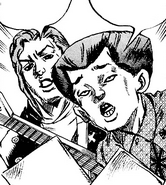 Losing his front tooth after Okuyasu punches him.

Taunting Koichi after threatening to steal everything from him.

Wounding himself with a superficial stab.

Begging Koichi to spare his life.

Beaten up by Toshikazu Hazamada and his Stand.

Tamami returns, fully healed after his stay in the hospital.

Informing Rohan that his house is ablaze.

Tamami being yelled at by Hazamada for ruining his manga. 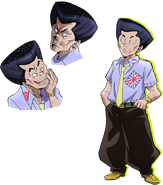 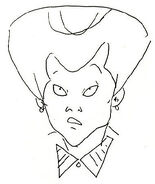