Phantom Blood (PS2 Game)
Tattoo (刺青, Irezumi), as referred to by Speedwagon, is a minor character introduced in Phantom Blood.

Tattoo is a rugged looking grown man with a medium sized beard and unkempt hair. His wardrobe consists mainly of a fringed leather jacket, pants, and belt. His most noticeable feature, and the obvious source of his name, is a large tattoo stretching from cheek to cheek and from forehead to nose dorsum - the tattoo appears to be either a butterfly or a design similar to a Rorschach testW image.

As a thief from the dangerous Ogre Street, Tattoo mostly goes for his victims in a combined attack with his friends. He is known for using a knife and shows no remorse in maiming and dismembering his opponents.

Little is known about Tattoo, aside from his rowdy nature and apparent acquaintanceship with Robert E. O. Speedwagon, the two of them both originating from Ogre Street. He is first introduced when he, along with Speedwagon and a Kempo Master, ambush Jonathan Joestar during his journey to find a cure for his father's illness. He is the first to attack Jonathan using a knife - quickly becoming shocked and incredulous when Jonathan stops the blade with only a gloved hand.[1]

Later in the series, after the mansion battle, Speedwagon decides to visit Jonathan in the hospital, with Tattoo and the Kempo Master along for the ride (likely implying that they have changed their criminal ways along with Speedwagon). Concerned for his friend's health, Tattoo suggests that Speedwagon relax due to his own injuries, but was promptly ignored.[2]

At the end of Part 1, he is seen in the group that sees Jonathan and Erina off on their honeymoon to America, along with the Kempo Master.[3]

Referred to as "Tattoo Guy" in the game, he appears as an enemy during the Ogre Street Battle (alongside Speedwagon and the Kempo Fighter). Tattoo can be played on some of the EXTRA MODE battles, though his moveset is limited to punches and kicks.

Tattoo appears in the game as part of Speedwagon's moveset and exclusive Style titled Ogre Street (, Ougā Sutorīto). When utilized, Speedwagon will temporarily summon Tattoo and the Kempo Master, who will follow him until they are: ordered to attack, hit, or separated far enough from him.

Using the move, Go nuts with those knives, boys!, Tattoo will attack Speedwagon's target, but will also attack the nearest opponent if Speedwagon is not locked on to anybody.

He also appears in Speedwagon's dual combo finisher, where he, the Kempo Master, and Speedwagon charge at the opponent and knock them back 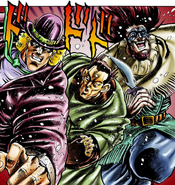 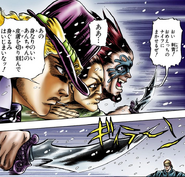 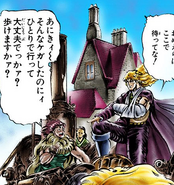 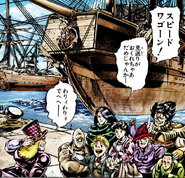 Tattoo in Jonathan and Erina's send off party

Tattoo as depicted in the Anime

Tattoo as part of the group that sees Jonathan and Erina off.

Tattoo in the Phantom Blood (PS2)

Speedwagon with Tattoo and the Kempo Master, EoH