Steel Ball Run (スティール・ボール・ラン, Sutīru Bōru Ran) is the seventh part of JoJo's Bizarre Adventure, serialized in Weekly Shōnen Jump in 2004 and in Ultra Jump between 2005 and 2011.

Set in the U.S. in 1890-1891, the story follows Johnny Joestar, a paraplegic ex-jockey, and Gyro Zeppeli, master in a mystic art named the Spin, as they compete with a vast number of others in the Steel Ball Run race: a mad-dash across America for a grand prize of 50 million dollars.

Steel Ball Run describes a new continuity apart from that detailed in Part 1-6 of the series. On top of core features to JoJo such as Stands, the story is marked by many references to the original series. 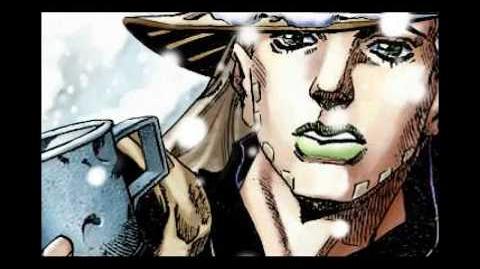 Retrieved from "https://jojo.fandom.com/wiki/Template:Steel_Ball_Run?oldid=366208"
Community content is available under CC-BY-SA unless otherwise noted.