Residing in DIO's Mansion in Cairo and acting as DIO's butler, he isolates and challenges Jotaro, Joseph and Kakyoin when the Joestar Group enters the mansion and forces them into waging their souls against him in various video game challenges. Terence is the last member of the Egypt 9 Glory Gods, and his Stand is Atum.

Terence wears a head wrap and a pair of earrings shaped into the letters T and D. He has beehive hair that is segmented and protrudes upwards. He wears a bluish vest over a black shirt with a double layered heart symbol in the chest area.

He has parallel bars tattooed on his nose, chin, and forehead (similar to the markings on his brother's cheeks).

As a butler, Terence is a mannerly individual. However, his demeanor is a facade for his twisted and arrogant personality.

Due to his occupation, Terence is rather polite and affable, keeping his calm even in the face of provocations and comes to greet and confront the Joestar Group when they enter DIO's Mansion.

Although Terence may seem calm and collected, he once savagely beat his older brother for hitting on his girlfriend and can be angered to the point where he becomes greatly stressed and appears to look older than his age. He feels superior to his older brother because of this precognitive ability, but, as noted by Jotaro and Joseph, lacks the shrewd and clever mentality that his older brother developed as a gambler.[5][6] While he looks at himself as superior than his brother, like Kenny G. and Vanilla Ice, Terence looked down on Nukesaku for having no Stand, even threaten to kill if he ever interfered.

When beaten any person in video games, he locks that person's soul in a doll, having a collection from easily defeating with the help of his Stand. Joseph claimed he's more twisted than his brother Daniel.

Terence is a very intelligent man and is especially proficient at video games: He defeated the likes of Noriaki Kakyoin and Tatsuhiko, a child genius with an IQ of 190, albeit without the use of his Stand's ability to read minds. Terence is quite prideful at his skill, when he realized Jotaro was cheating but couldn't figure out how, he claimed he is a video game genius and couldn't lose as he still held the lead in the baseball they were playing.

Due to his Stand's abilities, and lacking mentality like his, Terence is overconfident and overly relies on his Stand's precognitive ability. This was exploited when Jotaro blabbed out what pitch he was going to use which would allow Joseph to use his Stand to take the controls to change the direction as Terence was only focused on Jotaro and not Joseph. It was only after when Terence admitted defeat, within his soul, to his shock he'd realize who was at the controls.

Terence can be quite cowardly when put under a lot strain. It is shown that Kenny G used his Stand to create an illusion to separate the Josestar Group. However, if he's in a helpless situation, Terence would resort to begging to be spared as he failed to convince Jotaro and Joseph to let him go as they got Kakyoin's back.

His familiarity with his Stand's powers suggest that he asks only Yes/No questions on a regular basis, knowing what his opponent will do, but not which move they will make. This is further supported by his asking a non-Yes/No question in his anger, only to be met without a response and his realization that the question must be a Yes/No one.

Terence also has an attachment to the number 15 when picking numbers in his games, as his birthday was on January 5.

Atum is the Stand of Terence T. D'Arby. It possesses two separate powers, the first being able to steal the soul of anyone who recognizes defeat against him like Osiris and the ability to read minds in the form of seeing souls answering yes or no questions automatically.

With his talent at video games and the use of his Stand Atum, Terence had an even easier time stealing the souls of his opponents. Moreover, he claims that his older brother Daniel had never beaten him at any game. Thanks to Atum, Terence could indulge in his hobby of infusing people into puppets, building over time a small collection of victims.

At some point in time, Terence would brutally beat Daniel for trying to hit on his girlfriend.

After DIO came back from the bottom of the ocean, Terence met him at one point and entered into his service, becoming one of the Egypt 9 Glory Gods.

In Terence's first appearance in the series, he declares himself as the butler of the mansion in which DIO and his cohorts reside. He is an adept video game player. Like his brother, he convinced Jotaro Kujo and company into wagering their souls as prizes. While playing the racing game F-Mega with Kakyoin, Terence is nearly sent off the track, but planned it and landed safely on another part of the track ahead of his opponent, causing Kakyoin to admit defeat and forfeit his soul as a result.

Immediately afterward, Terence is challenged by Jotaro, who challenges him at the baseball game Oh That's A Baseball!. Initially, Terence makes use of his superior experience to pitch for Jotaro's batter's cold zones, but is surprised when Jotaro claims that he has "memorized how to hit" and scores a home run right after, along with a few more after that. This forces Terence to recognize Star Platinum's incredible precision and to counter that with his Stand's precognitive abilities.

Terence responds to this by hinting at the true nature of his Stand's powers and follows up by claiming his next pitch is a forkball. Atum, however, reads Jotaro's response and Terence changes his pitch to a fastball. This causes Jotaro's batter to hit a pop fly, and D'Arby's player manages to catch it, causing Jotaro's third out and the players to change sides. D'Arby claims his next hit will be a home run and demonstrates this by responding to Jotaro's pitch directly at his player and hitting a home run and repeating the process twice more.

Jotaro then removes his hat and calls his pitch, and D'Arby answers, though is promptly surprised when Jotaro manages to force his batter out with a pitch that was contrary to both his call and his soul's confirmation of the pitch. D'Arby, using Atum, manages to figure out that Jotaro was cheating and, because he is unable to figure out how he is cheating and Jotaro quoted his brother's line as justification for his continued participation in the game, loses his temper and attempts to figure out Jotaro's trick, but is unable to and the sides change as a result. D'Arby finally blows a fuse and knocks Jotaro's cap off, checks his console, and questions him repeatedly on how he was cheating, but is still unable to figure out the reason. D'Arby makes one final pitch, but Jotaro scores another home run, causing D'Arby's soul to admit defeat and Kakyoin's soul to be released.

Terence immediately tries to cover up his defeat but is promptly proven wrong by Jotaro reiterating the ability of his Stand. He then turns his head and notices that one of the controllers has Hermit Purple wrapped around it, causing him to realize that the one playing against him was not Jotaro, but rather Joseph Joestar. When both Joestars turn around to finish him, Terence asks if he could be spared but is sharply countered when Jotaro asks him to find the answer by reading his soul, which, much to his horror, answers "no". Jotaro then presents Terence with the dilemma of guessing which fist he will hit him with. Terence asks if it is the "left", and then the "right", before finding out that the answer is "both". Terence finally asks if it is Jotaro's signature attack "ora ora ora ora ora ora ora ora..." before receiving his answer directly in the form of a Star Platinum barrage and being blown straight through the false sky created by Kenny G.[7]

Later DIO, who kept Terence at his side because he liked his ability, comments that Terence will never understand why he lost because he was not willing to die for him as Vanilla Ice was.

Unlike his battle in the manga, on the SNES title, Terence is encountered and fought like a normal boss, as he uses his Stand, ATUM, to make physical attacks on the player.

Terence is one of several "quick time event" bosses in the console versions of the game.

At first, the player controls Kakyoin in order to race against Terence in the F-1 Racing and later controls Jotaro to play a Baseball game.

Unlike the minigames against Daniel D'Arby, there's no alternate ending against Terence, his battle will always end by Jotaro beating him.

Terence appears on several commercials challenging Jotaro to fight in All Star Battle (as the game's launch was coming closer Terence's reaction were getting more and more desperate, ending by his famous mind reading on Jotaro "YES! YES! YES!", much like his reactions against Jotaro in the manga).

Terence also appears as the explanatory character for the CHARACTER GALLERY MODE, where the player can see all the characters models and costumes (similar to his Stand ability).

Terence posing with his Stand, Atum

Terence smiling
Terence with dolls.png
Showing off his soul-puppets to the Joestar group 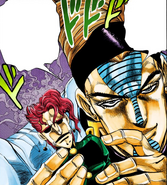 Terence as he appears in Heritage for the Future

Terence's back-view in Heritage for the Future