The story serves as a sequel to Diamond is Unbreakable.

The novel shows the events following a mysterious death in Morioh, alternating between the perspectives of Koichi Hirose, Chiho Futaba and Takuma Hasumi, two original characters and the protagonists of the novel. Hasumi's Stand is called The Book and possesses the power to record everything he sees or feels into a small, leather-bound book. Josuke and several other Part 4 characters appear as side characters. A third storyline, from the perspective of Akari Hirai, another original character, takes place in 1981.

In 2000, three days before the end of winter break, Koichi and Rohan find a blood-stained cat outside a convenience store. They go searching for the cat's owner, and find a woman's strange-looking corpse inside the house. By using Heaven's Door, they find a clue: "a male student with red scratch marks under his arm." Over the span of 3 months, they investigate the murder with Josuke and Okuyasu's help. 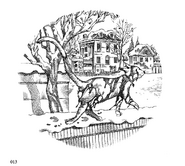 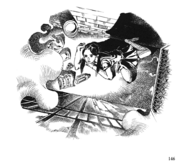 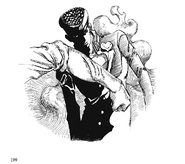 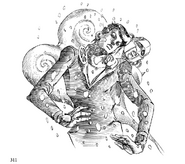 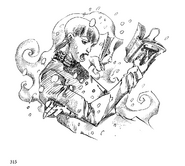 In 2000, it was announced that Otsuichi would be writing a novel based on Part 4: Diamond is Unbreakable.

An incomplete 30-page rough draft was released in a 2002 issue of Yomu Jump (a special novel-based issue of Weekly Shōnen Jump) along with a full release date in February 2003, but the novel ended up proving difficult to complete. In the annual Japanese guidebook, Kono Mystery ga Sugoi 2004, Otsuichi claimed to have written over 2000 pages, but had thrown them all out.[1] Intent on writing a novel that lived up to the manga, it took him until 2007 to complete it.[2] The finished novel ended up being a completely different story and titled The Book: JoJo's Bizarre Adventure 4th Another Day.