Fused with Enrico Pucci in order to create C-Moon

All Star Battle
The Green Baby (緑色の赤ちゃん, Midori-iro no Aka-chan) is a minor, key character featured in Stone Ocean.

The Green Baby is a unique creature made of DIO's bone and a multitude of souls. Its birth represents an advanced stage in the plan agreed between DIO and Enrico Pucci, as outlined in DIO's diary. The baby also happens to be a Stand User, and is automatically protected by Green, Green Grass of Home.

The Green Baby resembles a gremlin in appearance, with two lines going down either side of its cranium. It has large, pointy ears and green skin, which is patterned with leaf shapes. It has eyes that resemble seeds. It also has what appears to be a leaf-shaped mark on its forehead and the Joestar Birthmark on its back.

The Green Baby seems largely innocent, like a human baby. It is curious and shows interest in Jolyne's birthmark.

The Green Baby's Stand causes the size of perceived threats who approach it to proportionally shrink the closer they get to the Green Baby. This effect can continue endlessly, even to the point where the target will seemingly vanish from existence.

A strange creature, the Green Baby was born from DIO's bone after it absorbed the souls of thirty-six convicts.

DIO's bone began by infecting convicts by touching them. Those infected sought out the sun and slowly germinated into plants. Thirty six people in total were infected.

It was during this time that the gang: composed of Jolyne, Anasui and Foo Fighters, came across the bone. When Jolyne tried to stop the bone carrier, a random infected person, she herself became infected.

After being exposed to sunlight, Anasui concluded that the plant must only bloom in sunlight. Jolyne, knowing this, still jumped in to grab the newly forming Green Baby. Soon after, D an G's invincible automatic Stand Yo-Yo Ma swallowed the shell containing the Green Baby, forcing Jolyne and Anasui to accompany Yo-Yo Ma while Foo Fighters hunted down D an G.

After D an G was killed, the Green Baby hatched, removing Jolyne's plant infection due to no longer needing the plants to grow. Anasui and Jolyne then hunt down the Green Baby as it wanders away. Unfortunately they discover that the Green Baby has a Stand which shrinks anything that approaches it. As Jolyne attempts to foil the ability, Green, Green Grass of Home appears to defend the Green Baby and reduce all threats to nothing.

After a long fight, Anasui manages to trap the Stand within a bottle, using Diver Down to help him and Jolyne escape the bottle. Unfortunately, while they are still diminished in size, the Green Baby kicks the bottle towards the two, nearly crushing Anasui, before Jolyne breaks the bottle and the baby cancels its ability due to a newly found interest in Jolyne and her Joestar family birthmark.

Shortly after this, they are tailed by Pucci, whom eliminates Foo Fighters and incapacitates Anasui. Jolyne sets out to fight Pucci and stop him, but Pucci tosses Jotaro's memory disc into a dying Anasui, which leaves Jolyne with the threat that Jotaro's disc will be lost with Anasui. Jolyne goes after the disc, to Pucci's joy, which allows him to utter the fourteen words to the Green Baby. The baby quickly reacts and rips at Pucci's arm, dragging him into the bushes violently to fuse with him. 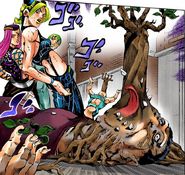 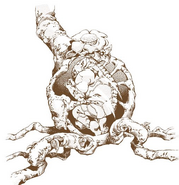 The baby with its presentable eyelashes

A pose later utilized in his awakened form, C-Moon