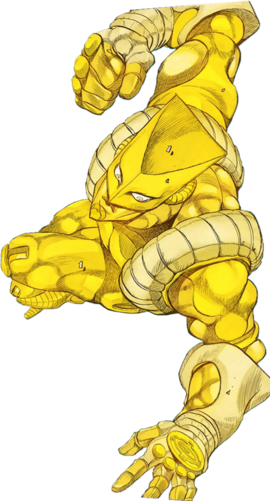 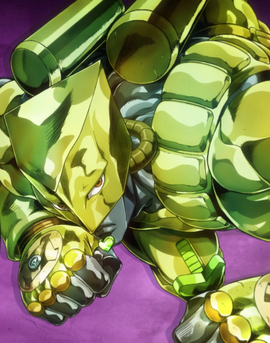 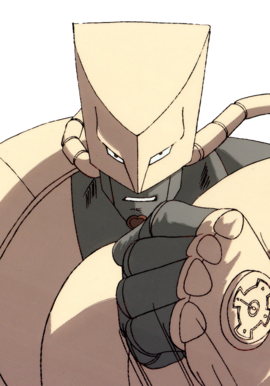 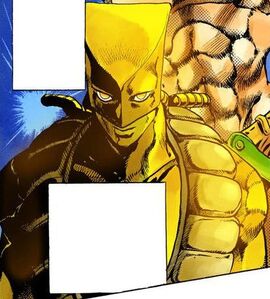 The World (ザ・ワールド（世界）, Za Wārudo) is the Stand of DIO, featured in Stardust Crusaders.

A humanoid Stand, The World is tall and has a very muscular build. It bears a striking resemblance to DIO in terms of appearance. It wears a headpiece covering its face to the end of its nose, slanting at a steep angle from the base of its forehead to a peak situated above the rear of its head by about half its height, leaving the face of an inverted triangle visible to the front; somewhat similar to the Red Crown of Lower EgyptW.

It wears small, simple twin diving cylindersW on its back, connecting via short, twin-ridged cables to the rear of its mask; perhaps secured by thick, ridged or puffed straps running from the rear of its waist over both its shoulders to its front. The back of both its hands bears the shape of a simple clock face. Its chin, the base of its abdomen, its crotch and its knees are topped by heart shapes. Plates on its shins, its footwear bears curved, sharply-pointed toes, similar to those of DIO's outfit in Part 3. Perhaps the tanks could be a reference to the Dio song, "Holy Diver", or the fact that DIO was trapped under the sea for 100 years.

It is named for the Tarot card The WorldW, the last card in the Major Arcana and symbolic of tectonic chance: the beginning of a new world order. Even before its actual appearance, its rumored power was enough to strike fear and instill loyalty in DIO's followers.

It's revealed in DIO's notebook that he intended to engrave 14 phrases on his Stand to remember them,[1] although it's unknown if he actually does so before his death.

The World shows no particular personality, although it occasionally smiles as it pummels others, hinting that it may be a rather cruel entity that takes pleasure in causing pain.[2][3] Its Stand cry, seemingly communicated by DIO, is Muda Muda Muda! (無駄 無駄 無駄!, lit. "Useless, useless, useless!")[2] The World Itself doesn't make much attempts at speech. In the anime, The World makes grunting noises while fighting Star Platinum, and in the English dub, the mumbling sounds are replaced with growling sounds.

The World is an exceptionally powerful Close-range Stand much like Star Platinum as noted by Noriaki Kakyoin and Jotaro Kujo, but boasting an effective manifestation range of approximately 10 meters.[4] Despite requiring a close distance to inflict damage, its overwhelming physical might and near unstoppable control over time undeniably make it one of the most dangerous Stands in the entire series. The World is powerful enough to make it's user capable of flight.

Super Strength/Senses/Speed/Precision: The World possesses phenomenal strength, senses, precision, and incredible speed, being able to easily punch Kakyoin right through his abdomen. DIO claims that The World is even stronger and faster than Star Platinum since it bested the latter in a clash of rapid punches between the two.[2] However, it is unclear if this is an aspect of DIO's vampiric nature or simply having greater experience with his Stand. Its main offense is generally characterized by a flurry of speedy punches and the occasional kick.

The World's power is its ability to stop time, allowing only itself, DIO and anyone with the same power, to act within the duration of stopped time.[5]

While time is stopped, DIO can move his own body, as well as his Stand freely, along with any object he touches, allowing him to strike his defenseless enemies, move to a superior position, and toy with his victims.

All force applied by DIO during the time stop continues to exist after time resumes. This is seen when the objects that DIO throws can momentarily move during the stopped time before grinding to a halt, and then regaining its initial momentum once time starts moving again. A flurry of thrown knives could fly for several meters before stopping near Jotaro.[6]

Another unique feature of the time stop is how DIO can seemingly float in stopped time. Since no forces other than the time stopper's exist during a time stop, there is no force of gravity, allowing DIO to move freely in space as he wishes, with the help of his stand.

It is notable that DIO needs to consciously activate Time Stop, which means that surprise attacks can prevent him from stopping time.[7]

Because of DIO's weakened state during Part 3, this ability initially only works for up to 5 seconds in DIO's frame of reference before time flows again.[8] However, thanks to DIO's immortality, the duration of stopped time increases as DIO becomes more accustomed to The World and the scar around his neck heals, reaching a maximum of nine seconds towards the end of Part 3.[9] However, had he not died, the period during for which DIO could have stopped time would have continued to grow, seemingly indefinitely.[10]

An alternate evolved form of the Stand named The World Over Heaven appears in Eyes of Heaven, wielded by Heaven Ascension DIO.

DIO and The World together 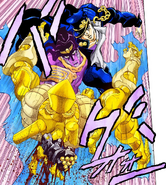 Star Platinum punches through The World's stomach after Jotaro's trick

The World in the OVA

The World is destroyed by Star Platinum fatal punch 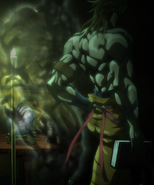 First glimpse of The World, seen in a mirror's reflection

The World with its fists through clockwork cogs, symbolizing its complete control over time

DIO, awakening his Stand for the first time to stop a shotgun blast

DIO summoning The World to take on Kakyoin

DIO and Jotaro face off

The World is punched through the chest by Star Platinum

The World is destroyed by Star Platinum's fatal punch

The World, shattering the screen in JoJo Sono Chi no Kioku ~end of THE WORLD~ 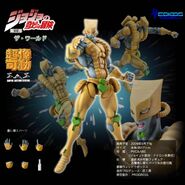 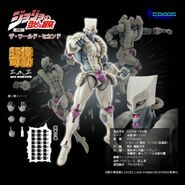 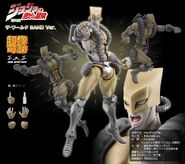 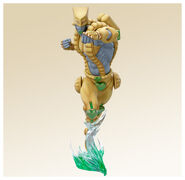 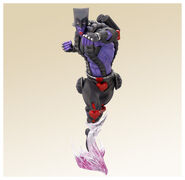 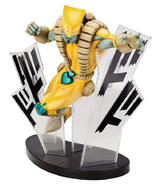 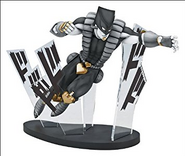 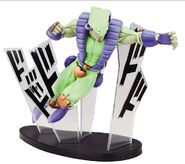 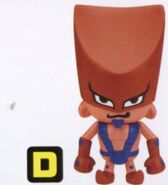 The World sprite in SFC game

The World, alongside DIO, as they appear in Heritage for the Future

The World's render, Eyes of Heaven

The World from Crusade Card Game

The World in the commercial for JoJo's Bizarre Adventure: The Real 4-D