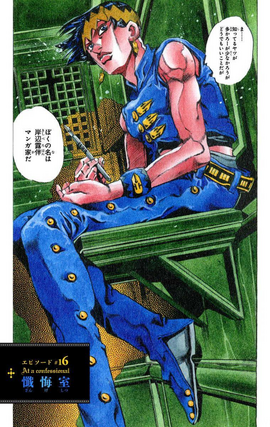 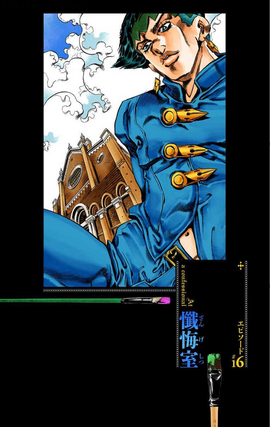 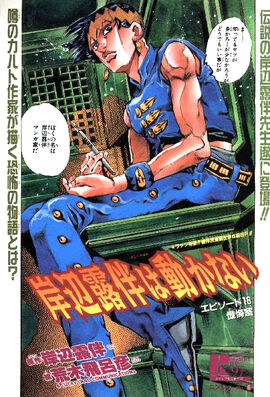 Rohan Kishibe from Part 4, Diamond is Unbreakable, stars as the main protagonist. This is the first chapter published in the series Thus Spoke Kishibe Rohan, despite the "Episode 16" subtitle.

Rohan Kishibe presents himself and narrates a gruesome story he heard in Italy.

After an incident forcing him to pause his series Pink Dark Boy for the summer, Rohan had decided to take a vacation in Italy. In Venice, Rohan accidentally entered the priest's compartment of a confessional in the middle of his research. Shortly after, a man entered the booth and confessed his sin to Rohan, believing him to be a priest. Interested, Rohan heard out his confession. The man accounted for his youth as a common worker. One day, a starving Asiatic beggar came to him begging for food. Disdainful, he forced the beggar to carry large bags of corn, eventually leading to the beggar's death. However, the ghost of the beggar appeared, swearing revenge and stating that he would come back on the happiest day of his life.

Things soon looked up for the man; he became rich and eventually had a daughter with a top-model. One day, as the man walked with a servant and his daughter cheerfully playing with a bag of popcorn, he couldn't help but think that it was the happiest moment of his life.

Suddenly, the spirit of the beggar possessed the little girl and revealed that he has assisted the man's prosperity from behind the scenes so that he could fulfill his revenge. The ghost explained that he wanted Fate to judge the man fairly, and thus challenged the man to throw a piece of popcorn in the air higher than a nearby lamppost and catch it in his mouth, each time at the clap of his hands, three times in a row. If the man succeeded the ghost would leave the man forever, otherwise the beggar would cut off his head.

With luck and ingenuity, the man succeeded twice, but attracted a flock of pigeon looking for the popcorns. To deter them at the last try, the man lit the pop corn on fire as he threw it, but sunlight shone out from behind the clouds, preventing the man from seeing the popcorn. Thus it landed on his shirt and without a second to spare, the beggar cut off his head.

Yet that man was alive. The two ghosts of the beggar and the servant appeared near him, revealing that the man used his servant as a body double to trick the beggar, only incuring the wrath of both ghosts. Rohan witnessed the spirits follow the man, vowing to endlessly stalk him. Deciding to interview him later if given the chance, he also expressed some respect for the man who tried to hang on to life.