She is the single mother of Josuke Higashikata, Part 4's protagonist.

Tomoko is a woman of seemingly average height and slim to medium build. She wears dark, straight, roughly neck-length hair with a hairpin.

Though her appearances are few, she has changed her clothes at each time she is seen. She is described by many male characters as being overtly attractive.

A single mother and teacher, Tomoko is known to show a strong temperament, disliking it when guys try to hit on her (as she still loves Joseph) and she gets annoyed quite easily. She also seems to be mildly perceptive, noticing that the seal on her milk that Angelo had given her was broken. Despite her sharp temperament, she is mostly a kind person, particularly to her family and friends.

When Jotaro Kujo visits looking for Josuke, she breaks into tears and hugs him, confusing him for Joseph; with whom she remains in love with. It is not known whether she knew he was married during their romance. She loves her family dearly, as evidenced by the close relationship she has with her son and had with her late father. She can also be strict with Josuke, as she froze his account when she found out he earned 1.66 million from a shared 5 million with Okuyasu and Shigechi, understanding that Josuke would spend it all if she didn't, and began saving it for his college funds.

She is fond of a particular sponge cake from Kamakura.[4]

When afraid, Tomoko tends to swallow her own saliva.[4]

Sometime before the events of Part 3, she had a relationship with Joseph Joestar while still in college. The 62-year-old man, however, was married to Suzi Q at the time, and so Tomoko didn't tell him that she was pregnant with his illegitimate child, Josuke, of which Joseph had knowledge of only when the boy was 16.[5]

When Josuke was developing his Stand and became ill (much like his half-sister, Holy Kujo), she drove through a blizzard to take him to the hospital, though this resulted in the car being lodged in the snow. They were eventually saved by an unknown high school student with a pompadour, who had thrown his coat under the car, allowing it to plow through.

Tomoko is introduced as a short-tempered woman, assaulting a man who catcalled and then offered a ride to her. She then receives the visit from Jotaro Kujo, whom she mistakes for Joseph and hugs. In tears, she confesses her love for him but backs off bewildered when Jotaro lets her down that he isn't Joseph. She takes a long time to change Ryohei Higashikata's bedroom, depressed about his death by a stroke (which was actually the doing of Aqua Necklace).

Later on, she is attacked by Terunosuke Miyamoto, who invades her house and turns her into paper with his Stand, Enigma, after seeing her sign of fear (swallowing her saliva). Terunosuke then used her to see Josuke´s sign of fear, but was defeated by Josuke and Yuya Fungami and Tomoko was saved.

(The information below derives from a Light Novel not written by Araki. As such, it may or may not be considered canon.)

Tomoko is accidentally attacked by Takuma and retains serious injuries, making Josuke confront him about it. 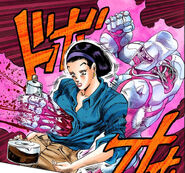 Tomoko discovers a message on her panties

The back of Tomoko

Tomoko giving a thumbs-up pose with her father and son.

Another photograph of the Higashikata family

Tomoko desperately driving a young and gravely ill Josuke to the hospital. 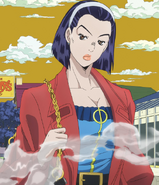 Tomoko talking to her father.

Tomoko asks a disguised Angelo for a new milk bottle.

Aqua Necklace inside Tomoko's mouth, planning to kill her.

Tomoko being punched through the chest by Crazy Diamond to remove Aqua Necklace hiding inside.

Tomoko enters her house, taking her shoes off.

Tomoko feels that something is odd and asks if Josuke is there.

Tomoko inspecting her snack in the fridge.

Discovering that her panties have been vandalized.

Tomoko is chased by the Stand of fear, Enigma.

Enigma sealing Tomoko within a piece of paper.

Tomoko behind of Josuke.

Tomoko in the ending I Want You.