Antonio "Tonio" Trussardi (トニオ・トラサルディー, Tonio Torasarudī) is a minor character featured in Diamond is Unbreakable; as well as in an installment of Thus Spoke Kishibe Rohan.

Tonio is a professional chef of Italian origins working in an Italian restaurant named Trattoria Trussardi, at the edge of the town of Morioh. He is also a Stand User who uses his Pearl Jam to enhance his cooking.

Tonio is a man of average to above-average height and medium build. He keeps short, light, neat hair; and he often wears a genial expression.

Tonio is only shown in his chef's uniformW, comprising a light or white double-breasted jacket, a loose tie, an apron, and a tall, cylindrical hat. He wears the small, metallic emblem of a "T" at the upper corners of the chest his jacket and apron, and at the frontal fold of his hat.

Tonio Trussardi is a benevolent chef whose goal is to make people happy with his cooking.

As a chef, Tonio is very dedicated to his craft and his ambition is to serve and cure people of their ailments, showing a benevolent and caring personality. In Thus Spoke Kishibe Rohan, Tonio also confesses that he came to Morioh to cure his girlfriend Virginia. Although he was trained as a chef, he made extensive work to research the human body, studied alternative medicine, and looked for rare ingredients that are especially healthy. As a result, he can easily diagnose his clients and creates the best dishes to cure them of their ailments.

Tonio expresses great pride in his country's national cooking, thinking that Italian cooking is so healthy people here live long lives thanks to it and that Italians are the best when it comes to cooking tomatoes. Secondly, Tonio has a preference for simple, home-made style cooking; he wishes to make dishes that mothers can pass down to their children and is opposed to pleasing "snobby critics". To establish himself, Tonio didn't hesitate to work overseas and create his restaurant in the small coastal town of Morioh, in great part because Morioh's closeness to the sea and farmlands allows him to acquire especially fresh and high-quality products.

Tonio also works as his restaurant's waiter and displays a charismatic and courteous personality. It allows him to convince even reluctant clients to try out his dishes. As a chef, Tonio is rightfully furious when a client intrudes upon his kitchen as they bring bacteria from outside. His usual smile turns into a raging grin and while he doesn't turn violent, he still forces the intruder to clean up his kitchen as a punishment.

Tonio's Stand is Pearl Jam, a swarm of vegetable-like creatures that infuse themselves into Tonio's dishes, and increase the healing potency of the dishes to supernatural levels.

Tonio did extensive studies in cuisines all around the world and is extremely proud and confident in the skills he accumulated. Some of these studies include Chinese medicinal arts, Amazonian medicine, and African herbs (as stated in chapter 303: Let's go Eat Italian Part I). During his travels around the world he developed his Stand Pearl Jam, allowing for a much better cooking ability, but no one in his country, Italy, recognized his new ability. Due to being too young he couldn't open his own restaurant there, so he traveled to Morioh where the competition between restaurants is more intense and his chances were bigger.

Okuyasu Nijimura and Josuke Higashikata found Tonio's restaurant in Morioh and decided to visit it. Tonio presents himself to be different from other chefs, as he doesn't have a menu and the food he prepares is decided by himself after examining his customer's hands to determine what their ailments are. He examines Okuyasu, determining that Okuyasu had constipation, stiff shoulders, diarrhea, had only 4 hours of sleep and athlete's foot, and serves him food to make him feel better, but Josuke grows suspicious of him after several weird incidents with Okuyasu after eating the food. Okuyasu's eyes water uncontrollably after drinking African mineral water but afterward, Okuyasu feels re-energized, as if he had just had a full 10 hours sleep. His shoulder begins to ache and Okuyasu ends up rubbing enough dirt and dead skin off of his shoulder to make a softball out of them after eating a cheese and tomato dish but afterward, his arms feel much better and he can stretch in a far more agile fashion. After eating a spicy pasta dish named "Spaghetti Alla Puttanesca",  two of Okuyasu's teeth cavities are violently ejected and new teeth grow in their place. Josuke becomes incredibly suspicious and discovers miniature organisms in the food, determining them to be Tonio's Stand, Pearl Jam.

Josuke investigates the kitchen and finds the main dish, lamb, and applesauce, on a nearby countertop, as well as Tonio himself feeding the same dish to a small dog. Said dog's intestines are violently expelled from its body and the same fate befalls Okuyasu when he runs into the kitchen and eats the dish hungrily, his intestines bursting from his stomach. Tonio notices Josuke and becomes incredibly violent and angry, throwing a knife at Josuke and thrusting a bar of soap into Josuke's face, demanding he follows proper kitchen hygiene and berating him for entering the kitchen without permission.

Amazingly, Okuyasu's stomach feels far better, his constipation cured, and the dog who also ate the same dish is also fully healed, much to Tonio's joy. Tonio clears up the misunderstanding by stating that his only goal was to make good food that could make everyone feel better. He discovered his Stand whilst training in his culinary style, but since his hometown of Naples did not accept his style and he was too young to legally be allowed to start his own restaurant by Italian law, he moved to Japan, to the town of Morioh where, while competition was harsh, the opportunities were rife.

Though the misunderstanding is cleared up and Tonio is revealed to ultimately be a good person with an unorthodox Stand, Tonio still forces Josuke to clean the kitchen from top to bottom whilst he prepares Okuyasu's pudding dessert to cure his athlete's foot.

He later appears among the Stand users warned by Josuke about Yoshikage Kira after Shigekiyo Yangu's death. He promises to keep an eye on his customers. His final appearance is at the end of Part 4 where he, along with the other heroes, bid farewell to the spirit of Reimi Sugimoto.

Tonio's full name is actually Antonio Volpe, Massimo Volpe 's older brother. He was disowned by his father, who was trapped by antiquated ideals of class, leaving his brother to inherit everything. Due to this, he starts using his mother's maiden name-Trussardi-, and travels the world, looking for a place to establish himself.

Tonio became sick and the reputation of his food and restaurant seems to have gone away. Tonio used his food to heal Chiho Futaba's cold and Takuma Hasumi's stiff neck.

Several years later, Rohan goes to Tonio's restaurant and is cured of his sleepy eyes. In return, Tonio asks Rohan to assist him in seeking out "Disk Abalone", a Morioh-exclusive fish located in the "Leopard Spotted Rocks" coastline. Though uneasy of the legality of this at first, Rohan agrees to join him out of self-interest. Later that night, Rohan and Tonio travel to the outer rocks and discover a swarm of abalone in the water. Rohan notes that the property belonged to the Higashikata's, which is why fishermen cannot legally sell the fish. Tonio reveals that his true intent for obtaining the abalones was to cure his lover's tumor, an illness that even his Pearl Jam was unable to fix. The two swim into the water and begin collecting a few by hand, though after awhile Tonio suddenly disappears, much to Rohan's surprise. He discovers that the Abalones had the tendency to cling onto objects and were slowly drowning both him and Tonio. Rohan eventually saves them by using Heaven's Door to make a nearby octopus attack the swarm. Later, Rohan, Koichi, Okuyasu, and Josuke are seen dining on octopus in Trattoria Trussardi. Tonio is seen in the kitchen with his lover, Virginia, who is fully recovered thanks to Tonio's new abalone dish. 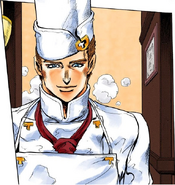 Tonio's first appearance, welcoming Josuke and Okuyasu into his restaurant 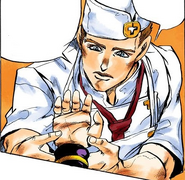 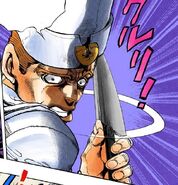 Tonio very upset over an invader in the kitchen

Tonio catches Josuke from behind... 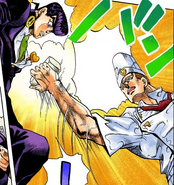 ...and orders him to wash his hands 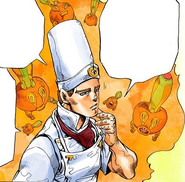 Tonio recalls how he gained his Stand, Pearl Jam

Tonio explains the cultural significance of tomatoes in Italian cuisine.

Tonio very upset over an invader in the kitchen.

Commanding Josuke to wash his hands before entering a kitchen.

Tonio explains his passion for both cooking and helping others.

Tonio and the other warriors of Morioh. 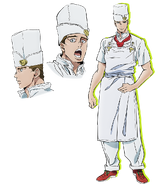 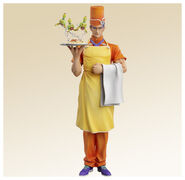 Trussardi as a figure