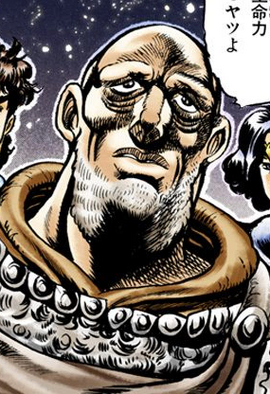 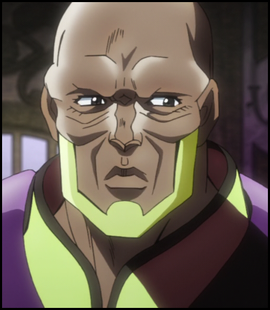 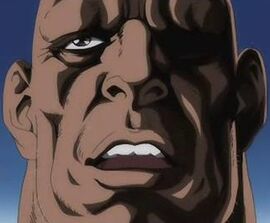 The character in this article is often referred to as "Tompeti," "Tonpeti," or "Tompetty".

Tonpetty (トンペティ, Tonpeti) is a minor ally featured in Phantom Blood. He is a Ripple master who trained Will Anthonio Zeppeli as well as Straizo and Dire.

Tonpetty is an older man of medium height and build. He has dark skin and eyes, prominent brow ridges with no eyebrows, pronounced frown lines, and bags under his eyes. He has a bald head and a white chinstrap beard. His typical manner of dressing includes a light-yellow monk's raiment with brown shoulder armor. He occasionally wears a piece of facial armor, resembling a hanbō.

Tonpetty is a wise, world-worn man who shows great concern for others. He warned Zeppeli about how his training would seal his fate but was not forceful about it.

As a Ripple master, Tonpetty has trained multiple people in the art of the Ripple. He is the only character shown to be able to predict the future of someone just by touching their hands, displaying a high level of skill. His students demonstrated multiple techniques as a result of their training with Tonpetty, including the ability to heal others.

Tonpetty is a Tibetan Ripple master who trained Dire and the then 25-year-old Zeppeli in the ways of the Ripple. He eventually revealed to Zeppeli that he would face a gruesome death if they continued. Nevertheless, Zeppeli decided to continue with his training and pursue the Stone Mask. When he found its location, Zeppeli wrote a letter to Tonpetty to ask for help in destroying it.

Tonpetty, accompanied by Dire and another student named Straizo, went to Windknight's Lot to help in the fight against Dio Brando. However, they did not meet with Jonathan Joestar and Robert E. O. Speedwagon until Zeppeli had died.[1] During the final battle between Jonathan and Dio, Dire was killed, but Tonpetty and Straizo still helped kill Dio's remaining Zombies. After the battle, he burned Dio's clothes as a way to erase his existence. Tonpetty was last seen at the docks together with the others to see Jonathan and Erina off for their honeymoon. Tonpetty's whereabouts after this are unknown, but it can be assumed that he died during the 50-year gap between Part I and II. Later, Straizo became his successor.

Tonpetty appears as a playable character in some chapters, as well as Extra Mode. As his appearance in Part 1 was minimal, his moveset and fighting stance were completely created for the game. His normal Ripple Special involves inflating his hand and striking the opponent (possibly a technique involving mechanics similar to that of the Zoom Punch) and Super Ripple Special where he fires off a barrage of strikes. 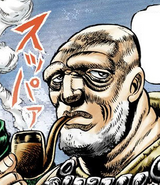 Tonpetty and others before Jonathan sails away

Tonpetty and others at the end of Phantom Blood

Tonpetty And Straizo As They Appear In The OVA's Timeline Videos

Tonpetty as seen in the Phantom Blood film

In the Phantom Blood PS2 game

In the game, joined by his apprentices

Tonpetty as a playable character in Phantom Blood PS2