Tooru (, Tōru) is the main antagonist of JoJolion. He is Yasuho Hirose's ex-boyfriend from high school and a part-time worker at TG University Hospital.

He is eventually revealed to be a Rock Human and a Stand user, wielding the calamity-causing Wonder Of U.

Toru appears to be a slim man on the shorter side, being just slightly taller than Yasuho. He has curly hair styled in an afro on his head, with two white swirls on either side. He has thick eyebrows which he constantly throws up to show cluelessness or general happiness (usually around Yasuho).

He wears a dark vest over a sweatshirt that ends halfway down his torso, leaving his lower abdomen exposed. On the right breast of the vest, there's a symbol for the letter "S" with a sun surrounding it. A similar yet smaller "S" can be located on the crotch area of his pants. On either shoulder of his sweatshirt are two teddy bears. His pants have a floral pattern on them, showing what appear to be grape vines and leaves.

Toru is a meticulous and somewhat manipulative individual, proving himself as a person to be strategic. Like most villains in the series, he puts his goals above everything and everyone else. Therefore when he uses or sides with a person he uses them as pawns of his own interest with little to no regard for them unless it affects him or what he desires. For example, Toru used Yasuho (her stand) when she was little by giving Toru somebody for Wonder of U to impersonate. He claims that he loves Yasuho and that he wants to be in touch with her again. But it is later revealed that he was trying to use Yasuho and her stand again to contribute more to his scheme. For when Yasuho was dying at the estate, he shown almost no concern for her. Another example of manipulating a character might be how he shot Poor Tom likely because he didn't want his plans to be foiled.

He also seems to be a bit carefree and collective, most likely because of the ability of his stand. While his stand was getting attacked and he was about to get spotted by Jobin, he listens to some music instead of losing his composure. When he knows that Josuke has an ability that can possibly bypass the calamity and prove a threat, he tries to retreat and take the fruit instead of risking the fight. Which, during the retreat, he politely asks Yasuho for the New Rokakaka instead of trying to fight her and/or simply taking it away.

Toru was abandoned by his mother as a newborn, and left to survive in the wilderness. He continued his physical development inside a wasp's nest. Around 17 years later, he grew into his adult body, and killed the entire wasp's nest in the process. He then became a citizen of Morioh, and entered society undetected.

At some point during Yasuho's childhood, he appeared to her and tricked her into helping him find an elderly doctor for Wonder of U to impersonate. Yasuho, possibly with the help of Paisley Park, identified Satoru Afeku. Yasuho did not realize this was Toru until much later.

During his high school years, Toru dated Yasuho and the two seem to have been very close. One year before the events of JoJolion, he broke up with her. The reason Toru decided to enter high school is unknown. He then became a part-time worker at TG University Hospital at an undisclosed date.

He teases Yasuho and hints that their previous relationship was somewhat sexual, but otherwise, the two are on good terms, as he is shown following through his promise to relay her message through to Josuke.

Afterward, Toru repeatedly crosses path with her as Yasuho follows Josuke and Rai across the hospital. Each time, he flirts with Yasuho and tries to remind her of their time together. Ultimately, he calls Yasuho and leaves a message declaring his love for her and saying he wants to get together with her again. When Josuke gets into trouble as a patient with a broken neck dies near Josuke, making it look like Josuke was the culprit, Toru comes to the forefront again. Reassuring Yasuho as he promises to testify in favor of Josuke, Toru gets again closer to her.

Eventually Yasuho make it to the Higashikata estate as Toru arrives there as well. Here is the only other time apart from his childhood flashback where we see his rock transforming ability, where a hornet tries to sting him, only for Toru to turn the afflicted area into rock as a defense. He hides behind a tree while he watches Yasuho struggling to secure the new Rokakaka. He tells her multiple times that she mustn't pursue him lest she be maimed or killed by a calamity. He tells her to leave the area and forget about him. This shows a side of Toru perhaps not wanting to cause death if not necessary, considering he knows that Yasuho would lose to him and his stand guaranteed. Eventually, when Yasuho considers and rejects Toru's advice, a calamity begins regarding a door detaching from a flying plane and hurtling towards the Higashikata estate. Eventually, Toru comes down to confront Yasuho directly and take the new Rokakaka. Joshu attempts to stop him to defend Yasuho only to have his fingers sliced off by a calamity. Toru takes the pot away from Yasuho and notices the plane door falling towards them. It is implied he knows what is about to happen and begins to leave the area. As the plane door is moments away from falling on and killing Yasuho, Josuke shoots one of his invisible soap bubbles through Yasuho's phone, with the assistance of Paisley Park. Toru is hit by the invisible soap bubble and intensely wounded in the abdomen, crashing into the wall of the estate grounds. With Toru temporarily disabled, the plane door misses Yasuho and crashes through the Higashikata family house. Toru lies on the ground for a while as Yasuho and Josuke talk about how they need to get rid of him for good. Eventually Toru stands back up and slowly begins approachin Yasuho, revealed to have eaten one of the new Rokakaka fruits in an attempt to fuse with Yasuho to heal his wounds. As he slowly approaches Yasuho, Josuke hits him with yet another invisible soap bubble, knocking him far away from Yasuho once again and gravely injuring him. Toru crawls towards the Higashikata house, presumably to escape and/or find someone to fuse with. At this point, Kaato Higashikata appears in the garage, having been mourning over Jobin's death. Toru notices her and proceeds to attempt to bait her closer to him so he can fuse with her, assuming she knew nothing of the new Rokakaka and it's abilities, despite Kaato having spoken on the matter with Jobin prior. Deciding to kill two birds with one stone, Kaato reveals Tsurugi, previously hidden in her deck of cards, and has a fusion occur between him and Toru, in order to heal her grandson of the rock disease and defeat Toru once and for all.

Realizing the gravity of his situation, he reaches out to Yasuho, pleading for her to help him prevent the fusion, asking her to think of their relationship together. Yasuho simply stands by and lets the equivalent exchange continue. With the new locacaca's effects complete, Tsurugi is cured of his curse, passing it on to Toru. Taking on the rock disease, Toru turns to dust, defeated. In his final moments, he thinks he sees a wasp reminiscent of the ones from his youth, but realizes it's just a memory of his.

Toru, emerging from the hive, settles for Morioh. 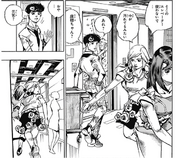 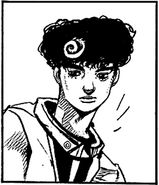 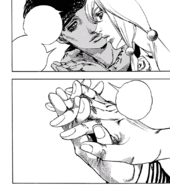 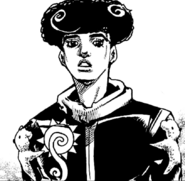 Old photo of the relationship between Toru and Yasuho 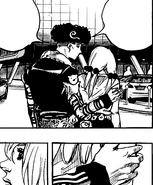 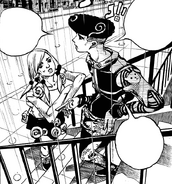 Asked by Yasuho to drive her to the Higashikata House 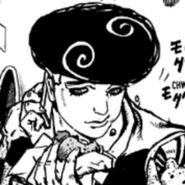 Toru being on his phone

Toru crumbling to his death