Hazamada is initially a malevolent Stand user given power by Keicho Nijimura before being neutralized by Josuke Higashikata and Koichi Hirose. He subsequently becomes lawful and befriends Koichi. His Stand is the manipulating doll, Surface.

A teenage male, Hazamada is initially tall, but later in the story, like Tamami, he shrinks to around Koichi's height. In the anime, he is simply depicted as already being short in stature.

He has long, straight dark hair and wears a school uniform with the character "間" along the collar and several belts spread vertically down the chest- mirroring a straitjacket.

He has dark color upper eyelids.

Hazamada seems quiet and timid. Although fellow students, like Josuke, are initially unaware of him. He holds a hatred of popular people; even jealously attacking his own Stand once it adopts Josuke's appearance. He also displays a very strong passion for things he enjoys, such as his favorite manga series. If these things are insulted in the slightest way or even if someone doesn't particularly like it, Hazamada becomes incredibly violent; even forcing another student to stab his eye out with a mechanical pencil for not liking a manga Hazamada favored.

Heaven's Door exposes an even more sordid personality. He has abused small animals, enjoys secretly handling his genitals in class, and once planned to force himself on Junko, a senior female schoolmate. Thus, Rohan judges him despicable, and that no one would want to read a story about such a character.[2]

Hazamada's Stand is Surface, able to copy any individual's appearance almost exactly and in certain distance-related circumstances, is able to dictate their movement.

Hazamada is a third-year student in class 3-C of Budogaoka private high school. He is given Stand abilities by Keicho Nijimura using the Bow and Arrow. In March, he had been rumored to have had an argument with his friend the night before his friend dug out his own eyeball with a ballpoint pen. The friend's motive for doing this was unknown as he said he already had the eyeball in his hand before realizing what he was doing. Apparently, the friend had been taken control of by Hazamada's Stand Surface, spurring Tamami Kobayashi to investigate.

Knowing that Koichi Hirose and Josuke Higashikata were searching for Stand users, Tamami told them about Hazamada's incident with his friend, suspecting it to be caused by a Stand.

After searching the school, Josuke decides to break open Hazamada's locker. Inside he finds a strange wooden doll, who turns out to be Hazamada's Stand, Surface. After the Stand copies Josuke's image and renders him unable to move, Hazamada appears from behind some lockers and explains that he wishes for Jotaro to leave town. Josuke tries to attack Surface but is unable to do so with his Stand range. Surface forces Josuke to elbow Koichi and then stab himself in the eye with a pen. Assuming he had knocked Josuke unconscious, Hazamada and Surface, still disguised as Josuke, make their way to meet up with Jotaro. They meet Tamami and Surface fools him, making Tamami think it is actually Josuke and knocks him out with a brick.

After calling Jotaro to meet up with them at the train station, the disguised Surface is greeted by many school girls, which angers Hazamada. He attempts to punch his own Stand but realizes that it is made of wood, and ends up hurting himself. Surface rebukes Hazamada for his actions since he has seemed to have taken Josuke's personality.

Hazamada wipes the blood from his hand upon a nearby motorcycle. The owner of the motorcycle finds the smudge however and begins to insult Hazamada. Surface comes from behind and knocks out the Motorcycle owner's friend and then grabs the owner from behind. Hazamada pulls out a scalpel and attempts to cut the man from the inside of his mouth, but is stopped when broken glass is thrown at him. Surface catches the glass and realizes that it was thrown by Josuke. Josuke is able to reform the broken glass back into a bottle, breaking off Surface's right hand in the process. This allows Josuke and Koichi to run up ahead to meet Jotaro.

Josuke and Koichi arrive at Jotaro first, but Surface manages to take control of Josuke again. However, before he is able to attack Jotaro, the motorcycle owner and his friend from before appear, healed and instructed by Josuke to where Hazamada was. They drag Hazamada off, beating him to the point of hospitalization. Josuke, having broken free of Surface's ability, destroys the wooden doll.

In the hospital, Josuke and Jotaro question him about Akira Otoishi, but Hazamada denies knowing anything. He then remarks that he believes they will surely encounter him, as Hazamada believes that every Stand user is destined to meet one another by a thin line of fate.

Hazamada appears later (now much smaller than before), wanting to befriend Koichi Hirose, as both are fans of mangaka Rohan Kishibe. They visit Rohan and Hazamada becomes fascinated with his work, even though Koichi is a little scared of his methods (such as cutting open a spider that is still alive to examine its inside).

The two end up sneaking into Rohan's desk to see his drawings but are affected by his Stand Heaven's Door. Hazamada has his personality read, but Rohan comes to the conclusion that he is unsuitable for his work and leaves him alone.

Unlike the others, Hazamada privately hopes never to encounter Kira instead of offering his vigilance.

At the end of the series, Hazamada comes to say goodbye to Reimi Sugimoto.

Depicted as tall in a photograph 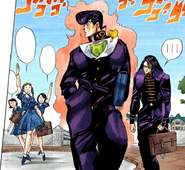 Watching his Stand, disguised as Josuke, attract the attention of girls

Ripping up a love letter meant for "Josuke" out of jealousy

Hazamada angry at his Stand's popularity with women

Hazamada, fed up with Surface's personality, punches it...

...only to hurt himself, before kicking his Stand away

Expressing his hatred of popular people 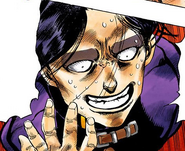 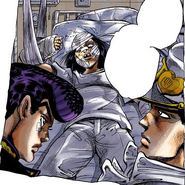 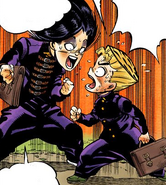 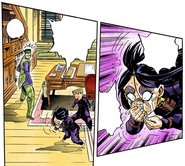 Disgusted as Rohan licks a spider 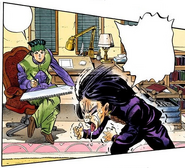 Hazamada turned into a book

Crying after being rejected by Rohan

Hazamada makes a cameo appearance at the end of DU Episode 1.

In a jealous rage over Josuke's popularity.

Hazamada in pain. (DAMN! IT HURTS!)

Hazamada threatening a biker with a switchblade.

Pinned down by the bikers he threatened earlier.

A severely injured Hazamada being taken away to the hospital.

Being interrogated in the hospital by Josuke and Jotaro.

Crying after being rejected by Rohan.

Hazamada and the other warriors of Morioh.

Hazamada yelling at Tamami Kobayashi for ruining his manga. 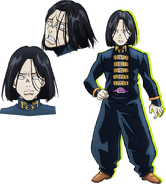