Toyohiro Kanedaichi (鋼田一 豊大, Kanedaichi Toyohiro) is the alias of a minor antagonist in Diamond is Unbreakable, featuring centrally in the arc Let's Live on a Transmission Tower.

Kanedaichi is a hermit living inside a transmission tower, which is revealed to be his own Stand, Super Fly. Trapped and wishing to escape his tower, he draws Josuke inside his home and subsequently battles him, Okuyasu and Mikitaka. His real name and identity are unknown.

Toyohiro is a man of average height, wearing iron kneecapped pants and a crop top that connects to his belt via two suspenders attached to his shirt pockets. He also wears a hat that appears to be based off either a mariner’s or newsboy’s cap but with the hat’s visor located higher up the hat’s crown. Like many other part 4 characters, Toyohiro’s clothing is adorned with several brooches, with his in particular reflecting nature. These include a spider and a butterfly on his shirt and leaves on his belt and armbands.

Toyohiro’s most unique feature is his masks; initially he appears quite well defined and with hair poking out underneath his hat. However, once he removed his first mask, his ears become inhuman in shape with the colours in his eyes inverting. His skin also seems to sag around the bottom of his neck, making the mask more noticeable. In addition, he wears a different hat that is similar to his first but without the brim. The final mask shown is quite unflattering, as Toyohiro’s head is adorned with only a few tufts of hair and his lips become wide and droopy. All three of his confirmed faces have two, stitch-like markings that run down Toyohiro’s cheeks.

Initially, Kanedaichi showed himself not to be above trickery, as he tricked Josuke Higashikata into entering Super Fly while he himself plotted a means of escape. However, he states during his fight with Josuke he didn't want to kill anyone and even warns Josuke when he falls. He also says he didn't think he'd actually escape and that his plans don't usually work out. He admits he stayed in the tower in the first place because he was scared of civilization and only decided to leave because Yoshihiro tricked him by saying he would set him for life if he would trap Josuke and his friends. He proves to be regretful as he offers to treat Josuke and his friends to dinner and tend to their wounds though they decline.

As he was anticipating his death, he was prepared to accept it, though had a change of heart upon being saved by Josuke and willingly lives a peaceful life in the tower, interacting with tourists casually.

His real name and appearance are unknown, as he wears a mask and everything he said about himself was part of a trick. It is mentioned that he is anti-social which is why he hides his identity. This also explains why he abandoned society in the first place to live in the tower.

Bound to his transmission tower, Kanedaichi's Stand is Super Fly; bringing it to a sort of life while trapping him inside.

After living in his tower for so long, Kanedaichi has developed huge calluses on his palms, allowing him to hammer nails, slide down a cable, aid him in calculations, and hide tools.

He is also highly acrobatic, able to swing around the telephone tower to dodge strikes with ease.

Three years before the events of Diamond is Unbreakable, Kanedaichi purchases a decommissioned transmission tower from the power company for 100,000 yen and converts it into a self-sufficient house.[1] Choosing to live in the tower out of his own introvertedness,[2] he eventually develops a self-inflicting Stand named Superfly that binds to the tower and forces him to stay within its boundaries. Kanedaichi eventually meets Yoshihiro Kira, who offers him a good life outside the tower if he's able to trap a Stand User inside it.

Kanedaichi is introduced as a hermit living alone in an old, retired transmission tower that Josuke Higashikata, Okuyasu Nijimura, and Mikitaka Hazekura come across one day. After Josuke is lured into the tower, Kanedaichi reveals that he was actually trapped within it by his own Stand and had built a home while preparing to escape. He acted peacefully so Josuke would enter his tower without worrying about an enemy Stand.

After a fierce battle with the three Stand users, Kanedaichi decides to stay in the tower after being defeated, realizing that the world outside the tower actually terrified him. He becomes a Morioh landmark, letting tourists take his picture with them for spices and tools.

(The information below derives from the TV Anime. As such, it may or may not be considered canonW.)

After the final battle with Yoshikage Kira, he is seen talking to Mikitaka at the tower, asking him if the town really is as interesting as he makes it seem.

Toyohiro continued to live in the iron tower. Becoming an attraction in Morioh, he maintains contact with the outside world talking with tourists, who often go to chat and bring him condiments and sweets. His name is still unknown, so people call him the "Iron Tower Man". Chiho Futaba doubted the story but then heard that there are more bizarre stories in Morioh, such as that of a girl who lived between two buildings. 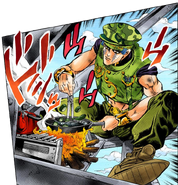 Toyohiro cooking fish on the tower. 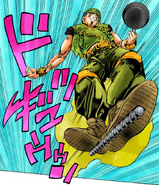 Gazing at Josuke and Okuyasu. 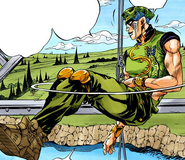 Hanging from a cable. 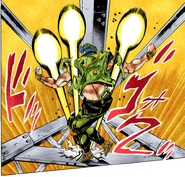 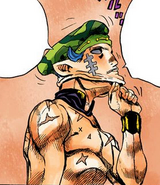 Toyohiro revealing that he wore a mask. 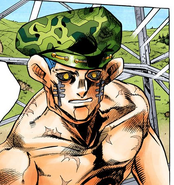 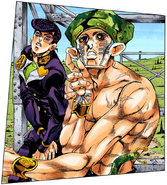 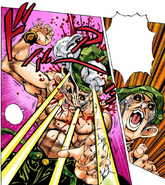 Crazy Diamond sending the reflected cuts back where they came from, hurting Toyohiro in the process. 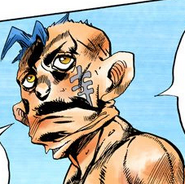 Toyohiro surrenders, becoming one of Morioh's tourist attractions as well.

Toyohiro balancing on a beam of the tower.

Toyohiro gazing out at Josuke and Okuyasu.

Toyohiro hanging from a cable.

Hanging from a cable while evilly grinning.

Surprised the cable he was holding onto was Mikitaka.

Toyohiro reveals the knife hidden in his calluses.

Toyohiro cuts one of the tower's cables.

Revealing that his "face" is actually a mask.

Toyohiro grins, confident in his victory.

Crazy Diamond sending the reflected cuts back where they came from, hurting Toyohiro in the process.

Toyohiro surrenders, becoming one of Morioh's tourist attractions as well.

Tending his garden while keeping company with Mikitaka. 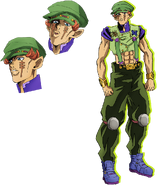