Tsurugi Higashikata (東方 つるぎ, Higashikata Tsurugi) is a side character and ally featured in JoJolion.

Tsurugi is the child of Jobin and Mitsuba Higashikata, and the youngest of the Higashikata Family. Raised as a girl, his fear of the Rock Disease drives him to cooperate with Josuke Higashikata to find a possible cure. Tsurugi is a Stand User and his Paper Moon King confers supernatural properties to his origami.

Tsurugi is a 10-year-old child of average build, if not slightly chubby. Although originally introduced as the daughter of Jobin and Mitsuba, it is revealed that Tsurugi is actually a boy, and has been raised as a girl his whole life in order to ward off a "curse" that affects the first born child of each generation of the Higashikata family. As such, he wears a polka-dot dress and a pair of flats, and on top of his head is an origami frog. Additionally, he has a tattoo on his right shoulder with the kanji for life (命, Inochi) and a tattoo on his left shoulder with the kanji for princess (姫, Hime).

Tsurugi's personality is a strange mix of typical childishness and precocious sinisterness.

Like all first born sons in the Higashikata family, Tsurugi is being raised as a girl for the first 12 years of his life to ward off the stone disease. However, this aspect of his upbringing is almost never touched upon save for his dress and seemingly has no bearing on neither his personality nor his various relationships, nobody showing a particular reaction to this.

Tsurugi is introduced as a playful yet creepy kid. During his introductory arc, he plays a mean prank on both Yasuho and Josuke by making them unable to differentiate between people through his power Paper Moon King. He eventually apologizes to Yasuho for the distress he's caused to her. Other similar traits are his quick friendship with the dog Iwasuke and his love of making puns. Tsurugi is also quite libidinous and he shows a disturbing attraction toward Yasuho, frequently improperly fondling or licking her.

However, he also shows a measure of threat. For instance, he didn't hesitate to deliver Josuke to Yotsuyu Yagiyama to be killed, stating that Josuke's life was a sacrifice to save himself. When he was chased by Aisho, Tsurugi didn't hesitate to trick his foe into confusing a bus with his father, resulting in his eventual death. It is also shown that Tsurugi is somewhat of a black sheep in school, being the target of bullies and having no shown friends thus far.

Tsurugi demonstrates a very deep-seated fear of dying from the Rock Disease and his will to survive this illness drives most of his actions during the story. As such he is quick to switch sides to whoever may grant him the best chances of finding a cure, becoming an unwitting pawn for Yotsuyu Yagiyama when promised with the Locacaca then allying with Josuke and Yasuho to find it and then siding with his father Jobin when he gets hold of the fruit. Tsurugi is attached to his parents the most but is more indifferent towards the other members of the Higashikata Family.

As a child, Tsurugi is quite prone to bouts of panic and nervousness in front of incoming danger, his Stand lacking offensive ability being of little help in such occasions.

Tsurugi's Stand is Paper Moon King, enabling him to give a degree of life to origami of his creation. These origami display different capabilities depending on the type of animal or object they are shaped into, similar to Tubular Bells. After they touch his target, the target is subjected to the illusion that all people and/or symbols and text appear the same. He can also subject the illusion that an object is something else, used during the fight 'Doobie Wah!' where Tsurugi used his stand to trick Aisho Dainenjiyama and give the illusion that the buses were Jobin Higashikata.

Tsurugi is born from the union between Jobin Higashikata and Mitsuba. As Jobin's eldest son, Tsurugi has been fated to be struck by the Rock Disease and was raised as a girl all his life. He appears to fit in quite well in the Higashikata family. He was present during the family photo and was introduced by Norisuke Higashikata IV.

Aware of his family's curse, Tsurugi is worried by his eventual fate. Soon before his introduction, Tsurugi meets the architect Yotsuyu Yagiyama, who shows him a possible cure in the form of an unknown food. Yotsuyu then persuades Tsurugi to help him kill Josuke in exchange for the cure.

Tsurugi comes to the forefront when Yasuho encounters him after being taken to the Higashikata family's underground storeroom. After attempting to play with her and having taken her phone, she discovers that Tsurugi is male after some struggle, at which point he reveals that his family's first born always cross-dresses in order to ward off the "curse" that strikes them at age 11 where their bodies stiffen and turn to stone, similar to what happened to Rina Higashikata. Daunted, Yasuho leaves the storeroom, though not before Tsurugi activates his Stand ability on her after having touched her phone, which he transformed into an origami frog.

Tsurugi continues his prank by also affecting Josuke but eventually cancels it and apologizes to Yasuho, leaving her to rest in the bunker.

Josuke later spots him bringing food to the bunker and follows him.

When Josuke and Norisuke are attacked by Yotsuyu Yagiyama's I Am a Rock, Tsurugi begs his grandfather to leave Josuke for dead, as he is cooperating with Yotsuyu. Tsurugi eventually tells them that he is afraid of the Rock Disease which will affect him, and that Yotsuyu showed him a cure in the form of a mysterious fruit, testing it on a dog.

After Yotsuyu is defeated and killed, Josuke confirms the existence of the fruit and Tsurugi adopts the dog Yotsuyu fed the fruit to, naming it Iwasuke.

Cooperation with Josuke and Yasuho

Main article: Every Day Is a Summer Vacation (story arc)

While Tsurugi is playing with his new dog, Josuke approaches him to enlist his help in interrogating Jobin, Tsurugi's father. Initially reluctant to go against a family member, Tsurugi is eventually swayed to Josuke's side by urgency and reveals to him that his father is obsessed with stag beetles, which will allow Josuke to uncover a weakness. While Josuke confronts Jobin, Tsurugi goes to Yasuho's house and asks her to help with her new Stand Paisley Park.

After Josuke wins Jobin's Lamborghini in a beetle fight and gives the key to Tsurugi, he and Yasuho secretly investigate the Lamborghini in order to discover Jobin's previous whereabouts. Paisley Park subsequently discovers that Jobin exchanged the fruit with a certain Aisho Dainenjiyama.

Tsurugi then investigates Aisho with Yasuho, eventually uncovering that the fruit is being sold by Aisho to people. However, Aisho discovers that he's being tailed and releases his Stand Doobie Wah!. Tsurugi and Yasuho are relentlessly pursued by the Stand which proves too tough for them to beat, so Tsurugi baits Aisho to them and tricks him by using his stand to make buses appear as Jobin. Aisho dies, run over by a bus.

The next day, Tsurugi and Yasuho meet with Josuke, but Tsurugi decides to leave the two alone. Although he he seen at Yasuho's home, Tsurugi lays low for a while

Tsurugi decides to confronts his father Jobin about the latter's involvement with the Rock Humans. Before long, Tsurugi, Jobin and Iwasuke feel the attack of Ozon Baby, an enemy Stand Jobin has planted inside the family orchard. Trying to escape out of the shed they were in, Tsurugi meets Ozon Baby itself and bears the full brunt of its power, suffering a debilitating decompression sickness. He almost dies but Jobin manages to take him to safety and revive him.

Before the fruit can be harvested, Ojiro Sasame confronts Tsurugi and tells him that he knows about the Locacaca Organization and his father Jobin Higashikata's involvement in their operation. Threatening to denounce Jobin unless Tsurugi lets him meet the father, Ojiro also stealthily puts Tsurugi's hand under his control. Fleeing from Ojiro, Tsurugi inadvertently leaks the location of the Locacaca because he's forced to hold a phone and send photos and videos to Ojiro. Ojiro manages to place his mark on Jobin's hands, cornering him. Jobin is forced to relinquish the Locacaca but Tsurugi tricks Ojiro with Paper Moon King into thinking the glasses shards on the frame of a broken windows are bigger than they really are; Ojiro makes Jobin close the broken window on himself and Tsurugi, but the little shards only hurt a bit while Ojiro thinks that the Higashikata are dead. Ojiro does steal the Locacaca but is baited into taking bank notes charged with heat from Speed King and dies. Jobin subsequently retrieves the Locacaca and also kills Makorin. Later, Tsurugi is in the Higashikata home when the Rock Disease truly begins affecting his body in front of his mother, Mitsuba, slowly transforming Tsurugi into an origami-like fusion. Jobin notices this and begins to think. Around one day later (comparatively, when Josuke awakes in the TG University Hospital after his ploy to get closer to the Head Doctor, Satoru Akefu), Tsurugi is seen dragging Norisuke Higashikata IV's body in a body bag. The implications of this are currently unknown.

Tsurugi appears in JoJo's Bizarre Adventure: Eyes of Heaven as a stage gimmick on the Higashikata House stage. He opens up the underground storeroom occasionally, which allows a single player to restore some of their health.

Tsurugi's original appearance, being carried by his mother 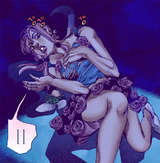 Tsurugi with a paper fortune tellerW

Yasuho discovers that he's not a girl 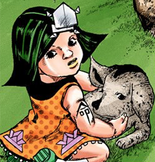 Tsurugi,Jobin and Iwasuke begin to feel the effect of Ozon Baby 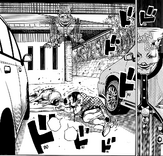 Norisuke asks if Tsurugi is all right after all

Jobin and Tsurugi get the Locacaca Branch 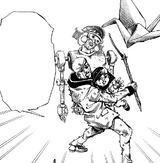 Jobin and Tsurugi feel victorious after all

Tsurugi being bullied by his school girls 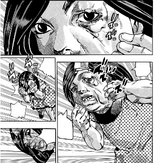 Tsurugi feeling the symptoms of his disease 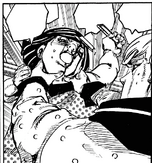 Tsurugi and Jobin passed out while Ojiro takes the New Locacaca

Tsurugi begins to break down upon discovering Ojiro and Maako's deaths

Tsurugi's body is twisted and contorted by the Rock Disease

Tsurugi attempts to comfort his mother, telling her that "the Higashikata family always wins"

The rest of the Higashikata family discover Tsurugi's fate 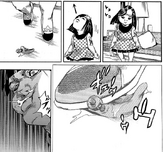 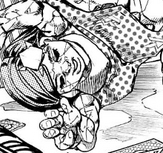 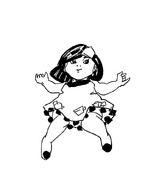 In Higashikata House Stage in Eyes of Heaven 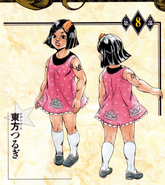 Tsurugi´s Render from Eyes of Heaven 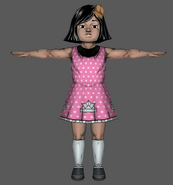 Tsurugi´s Model From Eyes of Heaven