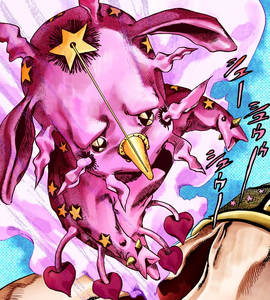 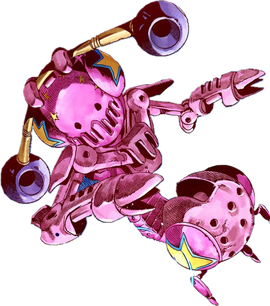 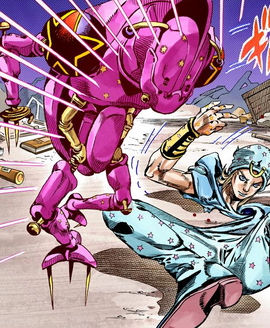 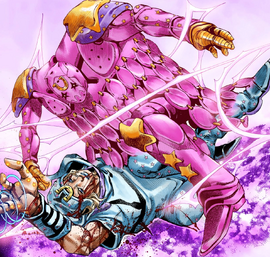 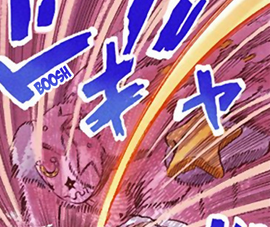 Similar to Part 4's Echoes, Tusk takes various forms, or "ACT"s. Like other Stands such as Dragon's Dream or Cinderella, Tusk's abilities are intimately linked with a supernatural phenomenon inherent to the world of JoJo's Bizarre Adventure, namely the Spin.

Initially named "Tusk" as it was the first form that Johnny sees, Tusk ACT1 is the Stand's base form. It is referred to as the guardian of the Left Arm of the Saint's Corpse.[2]

ACT1 resembles a small, neotenousW animal. Its head is of equal or slightly greater size than its body, and it floats with two short, vague, and inarticulate arms and one such leg. Its posterior is marked somewhat irregularly by small stars, behind which dark circles radiate to their points; while four tendrils droop from the base of its trunk to the approximate length of its leg, bearing heart shapes.

On its head, it bears two long, mammalian ears; small, reflective black eyes, under a brow of a troubled angle; a large star at the top of its forehead, behind which a dark circle radiates to its points, and from the center of which a string links with the tip of a cone fastened to the region of its nose. Eight wavering vestiges emanate from its head laterally: Two above; four from its sides, the lower of which, at its cheeks, are also surrounded by a dark circle; and one either side of its chin.

It was designed with an axolotl in mind.[3]

Tusk ACT1 possesses sentience separate from Johnny, as it is the guardian of the Left Arm. It decides to appear to Johnny and independently help him.

Despite having a corporeal form, Tusk's power functions as a supernatural ability that Johnny must use personally to fight like a gunman. Tusk ACT1 is overall quite weak and isn't sufficient to challenge most Stand users.

Tusk ACT1 grants Johnny the ability to imbue his nails with the Spin.[4]

Johnny is able to make his fingernails, and later toenails,[5] spin themselves at a high velocity and shoot them like bullets up to 10 meters.[2] The nails have incredible cutting power, capable of slicing through rock, cutting limbs clean off,[4] or carving a tree into a humanoid shape within seconds. However, they do not possess the power to cut through metal.[5] Once Johnny shoots a fingernail, they take a short time to grow back.

Occasionally, Johnny lets the nails stay on his fingers. When he puts the nails against the ground, their rotating movement can rapidly carry Johnny away from his current position. He can also use his nails as short-range cutting weapons.[5]

The spinning nails emit a faint buzzing sound, similar to that of a wasp, according to Oyecomova.[6]

During the second stage of the Steel Ball Run, Johnny and Gyro traversed a Devil's Palm without knowing it and the Corpse's Left Arm fused with Johnny not noticing. Later against the Boom Boom Family, Johnny awakened his Stand Tusk, which enabled him to defeat Benjamin Boom Boom and L. A. Boom Boom.[4]

Tusk ACT1 first appears to Johnny later during the second stage to inform him of the location of the Saint's Corpse's Eyes and briefly help him against Wired, spinning his toenails and allowing Johnny to deduce the true nature of the Steel Ball Run.[5]

Tusk ACT2 is the first evolved form of Tusk, accessed when Johnny makes progress in the technique of the Spin and uses the Golden Rectangle.

Mechanically, ACT2 possesses small, sturdy torso and arms, greater in proportion to its head. From its head hang two barrel-shaped objects. A barrel-like unit the size of its head is suspended at the base of a short, flat spine. Araki added some elements to make it unclear whether it's animal or machine, like a traditional Stand.[3]

With an enhanced destructive power and new properties to its nail bullets, Tusk ACT2 is a direct upgrade to ACT1. It allows Johnny to fare better in combat but limits the number of nails at his disposition.

Once Johnny learns to imbue his fingernails with the Spin, in accordance with the Golden Rectangle, it greatly enhances the basic properties of his shots.[7]

When Johnny activates Tusk, the fingernails now rotate around his fingers like axes. Thus, when he shoots the fingernails, they possess a drilling property, which dramatically increases the power of the shots. For instance, one shot is able to blast away a large zone on impact. On the downside, the nails regrow considerably slower, and as such, Johnny must save his nails or he will find himself out of ammunition.[7]

In addition to the damage boost, the nail shots gain a new property: after they land, they disappear and leave a bullet hole. These holes created through the rotation can automatically chase after any target designated by Johnny, leaving a dark trail behind them. When they manage to touch their target, the holes act as though the target was hit by a bullet in the location they touch. The holes shrink and disappear after a while.[7]

When Johnny shoots a fingernail with aureal rotation, the fingernail takes several minutes to grow back; however, Johnny discovers that by munching herbs or drinking tea, among others mint and chamomile, he can accelerate the growing process.[8]

Like with Tusk ACT1, Johnny can keep the nails spinning around his fingers without actually firing them. He is mostly seen using this for mundane tasks like brushing his teeth, grating cheese and wrapping spaghetti around his fingers.[9]

Because of their nature, Funny Valentine cannot use Dirty Deeds Done Dirt Cheap to send the holes into a parallel dimension. It is explained that the holes are by definition void and there isn't anything to send away.[10]

Johnny unlocks Tusk ACT2 when Gyro teaches him about the Golden Rectangle. Aided by his newfound power, Johnny defeats Sandman; yet soon after, Hot Pants intervenes, knocks him out, and steal his Corpse Part except for a single vertebra.

Tusk ACT3 is the second evolution of Tusk, unlocked when Johnny witnesses Jesus counseling him and finds a renewed resolve in life.

Although it is distinctly more human in shape, its head is still embedded into its body. ACT3 bears sharp spikes growing from both the underside of each of the three toes of its triangular feet and two from small, truncated, disc-shaped hands. On dark, spherical shoulders it bears the large, bold outline of a star; and from its upper lip to the rear of its head runs a tall, blade-like protrusion resembling a Mohawk.

Although functionally identical to Tusk ACT2, Tusk ACT3 involves Johnny directly exploiting the holes to reposition himself during a battle and increase his options.

Tusk ACT3 still possesses all the abilities and limitations of ACT2.

By shooting himself with a Spin-imbued fingernail with aureal rotation, Johnny is able to suck his body into the hole it creates.[11]

The hole created by the nail shot, specifically the infinitely small rotating point at the end of the hole, becomes a special space which, due to the infinite proportion of Johnny's spin, is also infinite and becomes a wormhole through space. A tailpiece theorizes the space as a boundary between dimensions.[12] Johnny alone can enter that "location" and anything other than him will be cut. This ability is limited by how long the holes can persist in the world.[13]

By moving the hole while his body is inside, Johnny is able to quickly reposition himself or key parts of him, such as his shooting hands, and attack from unexpected angles. Because the hole functions as a wormhole, anything sent into it will exit through the other end, although it will be severed. This includes enemy attacks.[13]

Gyro deems this ability a new level of mastery over the Spin that even the Zeppeli Family hasn't accessed with their Steel Balls.

During the fight against the Stand, Civil War, Johnny, in a moment of deep crisis, sees Jesus, who gives him the hint that leads him to discover the third form of Tusk.

Tusk ACT4 is the highest evolution of Tusk, accessed only when Johnny uses the Golden Spin.

ACT4 is of humanoid shape and broad or square build; of articulated legs, arms, hands, and fingers. Its head is mounted in the front of its chest, and from the bottom of its chest hangs to its ankles a vestment comprising strings of vertical ellipses. Like Johnny, it wears a horseshoe on its forehead. The inside of its curtain-like body is hollow, and its face can move around like the Zaku's mono-eye.[3]

The principle behind Tusk ACT4 derives from the use of the Golden Spin, which requires Johnny to make his horse run in its "natural state". By doing so, the horse produces rotational energy in the form of the Golden Rectangle and by combining it with Tusk, Johnny is able to release infinite rotational energy. He can, however, shortcut the process as a last-ditch effort, using a Steel Ball to temporarily galvanize his horse's movement.

Tusk ACT4 is thus one of the most powerful Stands in the series due to the infinite energy behind it but is incredibly difficult to deploy as a trade-off.

Tusk ACT4 embodies the infinite energy and rotation of the Golden Spin and is able to deploy it in various ways.

Following the principle of the Golden Spin, the energy wielded and embodied by Tusk ACT4 is infinite, allowing a wide array of otherwise impossible feats. One of the first abilities displayed by Tusk ACT4 is to be able to break through the dimensional barrier of Love Train and enter the space in which Valentine hides.[14] Moreover, Tusk ACT4 defies the laws of gravity and therefore can move slightly and probably still influence Diego during the stopped time.[15] The damage caused by the rotation is stated to be probably infinite as well.[16] Like with ACT2 and ACT3, the energy of the Spin can persist inside objects even if Johnny misses a nail shot, and can be redirected toward a target.[17]

If ACT4 touches someone, it imbues the target with an infinite spinning motion. Not only does part of the body separate to spin, everything down to individual cells spin on themselves, greatly distorting the shape of the victim. Eventually, the targets are disintegrated by the rotation and according to Diego, sent to another dimension.[18] The Spin goes on forever and never leaves the person or their Stand, forcing them to return to the place where they were hit or its equivalent in each parallel dimension, thus Funny Valentine was not able to escape it despite switching dimensions and/or bodies, always returning to the underground location in which he was hit. If someone uses a tool, like a carriage, to get away from the location, the Spin will imbue itself into the tool and destroy it, forcing the target back into their location. The rotation won't end unless Johnny shoots the target with a similar rotation that is spinning in the opposite direction, resulting in the two of them canceling each other out.[14][19][20]

Tusk ACT4 can also apply the Spin's energy in a more similar fashion to its previous forms and directly open a large space where there was none, as was shown in Johnny's battle with Diego Brando during which the Stand physically tears open a hole through the ground and enters the sewers with his horse.[15]

The Spin is also transferable between objects, as the Diego Brando from another universe cut his leg off and threw it to Johnny, transferring the infinite rotation to its user. Another example is when Funny Valentine went into a passing car trying to escape from Tusk; the infinite rotation destroyed the car near-instantaneously and returned to Valentine.[21]