Blown to pieces via Josuke Higashikata

Urban Guerrilla is a Rock Human sent by the Locacaca Organization to retrieve Rai Mamezuku. Riding upon his pet Rock Animal, Doremifasolati Do, Urban pursues Rai, Josuke, and Yasuho and subsequently battles all three of them. He is a Stand User and can decompose flesh through his Brain Storm.

Urban Guerrilla is a well-built Rock Human, dressed in minimal clothing. He wears a set of bracers on his forearms and a pair of trousers with three vents on the thighs and metal knee guards. Over Urban Guerrilla's head is a complex hood which features a breathing apparatus hooked into his mouth, along with goggles stylized with six-pronged eyelashes and a lens wiper on the left side.

However, when in public Urban Guerrilla assumes the appearance of a normal doctor in uniform, complete with glasses.

Urban Guerrilla is an animalistic Rock Human, grunting and growling while speaking. When stalking his targets, he devises a "killing order" to select who he'll assassinate first based on their threat level. Urban Guerrilla also displays an intense and disturbing side when frustrated, stating to Rai Mamezuku that he'd take his time dismembering and mutilating Rai's body. Despite this, Urban Guerrilla is efficient in his work and intelligent; observing his enemies before attacking and making sure to take needed precautions.

Urban is disdainful of humans and dreams that one day the Rock Humans will stand above humanity, planning to use the new variety of the Locacaca to do so. Despite his disdain towards human beings, he praises Josuke as a "marvel of biology"; due to his fusion with Yoshikage Kira.

As a doctor at T.G. University Hospital, it can be inferred that Urban was bright enough to obtain his diploma.

Urban Guerrilla's Stand Brain Storm is a colony in the form of burr puzzleWs sent out from his hands. It mimics the effects of certain bacteria by melting the flesh of anyone touching it and creating holes in its victim's body.

By riding on his pet Doremifasolati Do underground in areas with soil, Urban Guerrilla inconspicuously pursues Rai Mamezuku. Josuke and Yasuho also get involved when they meet the plant appraiser on a bus. The trio quickly abandons the bus and heads away from trees, causing Urban and Doremifasolati Do to be slowed down by the asphalt and concrete on the road. His Stand Brain Storm kills two rats by melting holes in their flesh and also assassinates two patrolling police officers who stop by the abandoned bus.

Urban Guerrilla catches up to his prey at their "safe place" and Brain Storm attacks them from tree branches, melting holes in Rai's left hand. While Yasuho runs toward the sixth pole of the ski-lift that Josuke and Rai are on, Urban Guerrilla and Doremifasolati Do reveal themselves. He grabs Yasuho's neck and sends Brain Storm into her body. However, Rai uses Doggy Style and stabs Urban Guerrilla's shoulder with a knife, causing him to let Yasuho free.

Urban Guerrilla becomes furious over the increasing difficulty of capturing Rai, yelling that he'll grotesquely maim his body once he's caught. He decides on a "killing order", choosing the best way to assassinate the trio based on their skill and powers. As he monologues, Rai attacks Urban Guerrilla again with another knife. Guerrilla hides within Doremifasolati Do's body, with it serving as a shield. However, Rai maneuvers the knife using Doggy Style to go between the gaps of Do's body and stab Urban Guerrilla's thigh before they dive underground.

As Doremifasolati Do chases Josuke and Yasuho underground, Urban Guerrilla secretly escapes and waits in ambush for Rai to appear on the ski lift pole. He catches Rai off guard and states Rai is now the first on Guerrilla's "killing list". Urban Guerrilla sends Brain Storm across the cables and into Rai's body. He states that the Locacaca is something the Rock Humans have known about for an incredibly long time. The Locacaca isn't meant to be used for money or longevity, but to evolve Rock Humans into something else entirely. While Urban Guerrilla talks, Rai uses Doggy Style to fashion a makeshift crossbow to fire a fork into Guerrilla's eye-socket.

Urban Guerrilla curses Rai and turns his attention to Josuke after the latter chases after him. He hides within Doremifasolati Do's body once more and goes on the offensive, sending Brain Storm into Josuke's face. Guerrilla laments that Josuke's body is slowly breaking down, stating he is aware of the fusion between him and Yoshikage Kira. He praises Kira on cultivating the new breed of Locacaca and condemns Tamaki Damo for only seeking it to acquire riches. Josuke ignores him and correctly deduces Urban Guerrilla is a doctor when assuming the role of a normal human. As Guerrilla tries to kill Josuke, he notices Rai's ribbons soaked in fuel. Rai wrings the fuel out into the open hole where Josuke, Urban Guerrilla and Doremifasolati Do currently are underground. 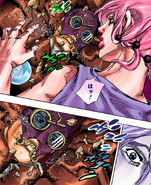 Urban Guerrilla and his pet Doremifasolati Do

Urban Guerrilla is hit in the leg by Rai Mamezuku

Hit by a fork via Rai Mamezuku 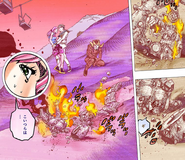 Dead bodies of Guerrilla and Doremi 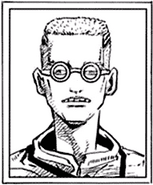