Golden Wind is the fifth story arc of JoJo's Bizarre Adventure, serialized in Weekly Shōnen Jump from December 1995 to April 1999. The arc spans a total of 155 chapters and takes place after Diamond is Unbreakable.

Set in 2001 Italy, the story follows Giorno Giovanna and his dream to rise within the Neapolitan mafia and defeat the boss of Passione, the most powerful and influential gang, in order to become a "Gang-Star". With the aid of a capo and his men, and fueled by his own resolve, Giorno sets out to fulfill his goal of absolving the mafia of its corruption.

Vento Aureo has a Japan-only action-adventure video game adaptation for the PlayStation 2.

A Vento Aureo anime was announced on June 21, 2018, for the 2018 fall season. Its title uses the English translation, rather than Italian as had been used in Japan since it was collected in tankōbons. 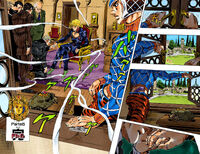