SO Chapter 60 - The Secret of Guard Westwood, Part 1

SO Chapter 66 - The Secret of Guard Westwood, Part 7

Westwood works as a prison guard in Green Dolphin Street Prison, and under the influence of Survivor, tries to assassinate Jolyne Cujoh in the maximum security ward. He is one of the four people sent to assassinate her. He uses the Stand Planet Waves in battle.

Viviano Westwood is a muscular man with a sharp square face. After his companion violently punches him, a significant part of his inner mouth, gum and teeth included, is visible. He has dark hair and an undercut. Westwood wears the uniform of the Green Dolphin Street Prison guards.

Viviano takes pleasure in antagonizing convicts, and even makes bets with fellow guards when doing so. He's mentioned that he believes prisoners are the scum of society. Being a guard, his job involves detaining prisoners everyday, and by doing so has mastered certain techniques that prevent them from struggling, such as effective headlocks.

Viviano uses Planet Waves to have small meteors fall from the sky. The ability makes it so the meteors always disintegrate before touching him as a safeguard.

Wrestling: Westwood is a prison guard trained to immobilize people with wrestling techniques and is competent enough to give a fight to Jolyne.

Viviano is a guard that worked in the Green Dolphin Street Prison for three years, after working in a Miami customs house prior. When he obtained his Stand is unknown though speculation suggests it was on the same day or the day before the Green Baby is born.

Viviano works as one of the guards overseeing Jolyne after she is transferred to the punishment ward. He is first introduced when him and the other guard barge into Jolyne's cell with a floodlight as part of a bet. After spraying Jolyne with a hose, some of the water gets on Viviano and he retaliates by hitting back. The two guards get into a small pushing fight that eventually erupts into a full out brawl. After taking out the other guard, Viviano releases the prisoners and begins fighting Jolyne. It's revealed that everyone's aggressive behavior is due to the ability of the Stand, Survivor, which causes everyone to fight with the ability to see each other's weak points. Jolyne manages to knock Viviano out, but as she closes in, her arm is suddenly damaged and Viviano reveals the Stand disc in his head.

Jolyne and Viviano continue to fight, but each bout constantly results in Jolyne getting pinned down by Viviano's detainment techniques. With Jolyne in a headlock, Viviano uses Planet Waves to bring a meteorite through the atmosphere with the intent of hitting Jolyne. Jolyne manages to escape by sending a string through Viviano's head and loosening his grip. The same scenario occurs multiple times, until Jolyne steals one of Viviano's boots and hits him with it by putting it in the path of one of his meteorites, followed by a headbutt with Stone Free.

SO Chapter 64 Cover A

SO Chapter 64 Cover B

SO Chapter 66 Cover A

SO Chapter 66 Cover B

SO Chapter 68 Cover B 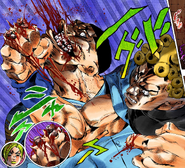 Viviano challenging everyone in prison

Viviano about to attack Jolyne 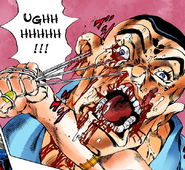 Viviano is blinded by Jolyne 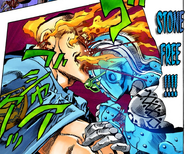