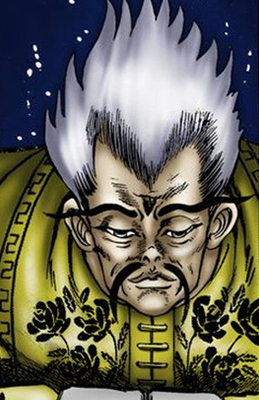 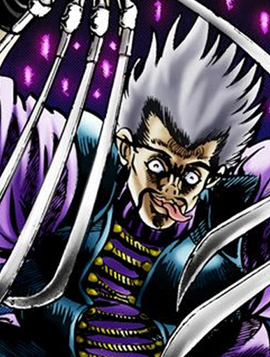 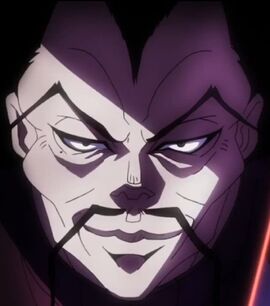 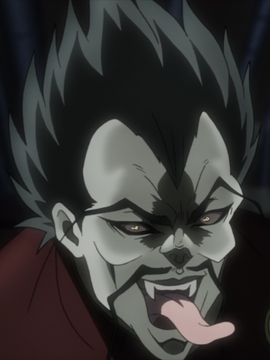 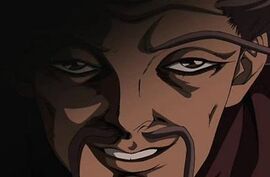 Originally a black market merchant in the slums of London, he becomes a faithful servant of Dio Brando after being transformed into a Zombie.

Wang Chan is a short, scrawny, elderly Chinese man. His hair is spiky and firmly stands upwards. Along with a prominent widow's peak, he has very long eyebrows, a small mole under his right eye, and a fu manchu mustache. After becoming a zombie, he grows fangs and a long tongue.

As a human, Wang Chan shows a nasty and greedy personality, selling a poison to Dio for fun without any regard for its use.[3] He also doesn't mind violence, smiling when Dio stabbed George Joestar. Later, he heads back to the Joestar Mansion after it burns to the ground to salvage the Stone Mask in order to sell it for a profit.[4]

Upon becoming a zombie, however, Wang Chan becomes entirely devoted to Dio's wishes. At first very quiet, the zombified Wang Chan becomes more brutal and cruel, being overall unrestrained in expressing his urges. He would notably recklessly attack Jonathan, underestimating him despite being warned by Dio that Jonathan was still dangerous.

Being versed in the art of fortunetelling, Wang Chan is supremely confident in his predictions and knew that Dio would escape imprisonment at the Joestar mansion.

As a human, Wang Chan was a fortune teller and an expert on oriental poisons. He successfully predicted that Dio would have great luck in his life, which proved to be true in his many near-death survivals.

After being zombified, he appears to have retained his personality, though he shows a more bloodthirsty side and selflessly serves Dio. In terms of physical ability, he can jump great distances much like one trained in martial arts. However, as one of the zombies shorter in stature, he usually takes to running away or hiding in self-defense, unless directly told by Dio to attack.

After Dio loses his body, Wang Chan is also shown capable of fighting one-handed, whilst the other hand holds Dio's head. He also turns the head to fixate Dio's vision, allowing the vampire to use his Space Ripper Stingy Eyes.

Claws: In battle, Wang Chan chooses to wear gloves with giant-sized claws. This way, he is able to increase his power and attack range. He is confident enough to kill a human by a simple swipe of his rigid claws, but is unsuccessful against Jonathan's Zoom Punch.[5]

Originally only known as the "Oriental Man", he owned a curiosity shop on Ogre Street. Wang Chan sells Dio the poison which Dio uses in the murder of his father, Dario Brando, and his attempted murder of George Joestar. However, Wang was not concerned with what the poison was to be used for. He tells Dio of a man in his own land who had a similar birthmark to Dio's and had a harsh life, but in the end lived to be over 183 years old.[3]

Sometime after, he is captured by Jonathan and taken to the Joestar Mansion. When he is used in an attempt to force Dio to go with the police, he again mentions his fortune-telling, saying that Dio is far too lucky to fully have to give up this early. Dio uses George's blood to become a vampire, taking Wang Chan as his subordinate when the latter goes to search the Joestar manor for valuables.[6]

Wang Chan then takes care of Dio while he is recovering from his injuries, showing great loyalty to him. He is seen pushing Dio around in a wheelchair during their encounter with Jack the Ripper.[7] He attacks Jonathan during his training, but is defeated and escapes, informing Dio about the Ripple.[5] When the group of heroes reach Dio's mansion, Wang Chan remains hidden, being the only zombie to survive the battle. He finds Dio's head and guards it, lamenting that Dio didn't have another body.[8]

Dio trusts him enough to be responsible for his head and implanting it onto Jonathan's body. He manages to stow away on the ship Jonathan and Erina board and after being spotted by Jonathan, he retrieves Dio's head from a coffin. However, Jonathan uses the last of his strength to crush Wang Chan's head and sends a ripple throughout his body. The impact from the attack sends Wang Chan's headless body flying into the ship's machinery and disrupts it due to the ripple controlling his carcass, causing the ship full of zombies to explode.[9]

Wang Chang appears as the "child" version of Shadow DIO when attacked by Alessi's Stand. After the move, Shadow DIO turns into Wang Chang holding the jar containing Dio's severed head. In this state, Wang Chan can attack by using his claws, or the head of Dio can attack using Space Ripper Stingy Eyes.

Wang Chan appears as the first boss Jonathan faces after learning the Ripple. Much like in the original story, Wang Chan uses his giant claws to attack and poison his opponent. Wang Chan also appears in the final chapter of the game, carrying Dio's head in a large jar, as he maneuvers around while Dio attacks with the Space Ripper Stingy Eyes.

Wang Chan is also playable in some chapters of EXTRA MODE in his original form.

Wang Chan appears in the PS3 game as a navigation character for the GALLERY MODE STORE.

Wang Chan arrested by the police

Fighting with his claws

Rescuing Dio from the rubble

Wang Chan in The Joestar Mansion

Reappearing on the ship, spotted by Jonathan