Weather (nickname, from Jolyne and Anasui)

Impaled through the chest via Enrico Pucci

SO Chapter 158 - What a Wonderful World
(In Spirit)

All Star Battle
Eyes of Heaven (Playable)
This article is about the character. For this character's Stand, see Weather Report (Stand).

An amnesiac at his introduction, Weather Report is a fellow inmate who seeks his memory and allies himself with Jolyne Cujoh. It is revealed that he is Enrico Pucci's fraternal twinW. Weather is a Stand User controlling the surrounding atmosphere through his ability, which is also named Weather Report (but its True Form is Heavy Weather).

Weather Report is a man of above-average height and medium to athletic build.

He commonly wears a light, flat-topped buffalo hat[5] (a fur hat with two short horns at its front), and a dark bodysuit.

While deprived of his memories, Weather was mellow and eccentric. He would boldly stand a few inches next to Jolyne's face to get her attention rather than call her name and usually walks on his toes. He was trustworthy and compassionate, rescuing those in need without caring for his own safety. Unless someone he knew was in danger, Weather hardly panicked. Weather was also described as having a strong sense of justice, describing the worst injustice as "evil that does not know it is evil".

Upon the return of his memories, he reveals his sinister colors. While still retaining his previous passion for his friends, he is not afraid to flaunt his powers for his own amusement. Weather smiles when he shocks unsuspecting victims or even skips in joy amongst his hazardous rainbows, his newer personality frightening even Anasui. His melancholy over his memories soon consumes him and drives him to settle things with his twin brother.

See also: Weather Report and Heavy Weather
Weather Report's homonymous Stand affords him a great degree of control over the weather, and/or the atmosphere.

He later develops Heavy Weather, representing the release of his basic Stand's full power; fostering a particular, bizarre delusion in all within its range.

Weather was originally born to the wealthy Pucci family, the younger of fraternal twins. He was stolen from the clinic nursery by a woman whose own baby had died the same day, soon after birth. In his teenage years, he worked as a juice delivery boy. One fateful day, he stopped a thief from stealing Perla Pucci's bag and within two week's time, the two began dating. Enrico Pucci, discovering that Weather was, in fact, his twin brother, sought to separate them in a manner that would least harm his sister. However, the "private detective agency" he used to accomplish this was actually run by the Ku Klux KlanW, who subsequently looked into Weather's family history and found that his "mother" had married an African American man. When the KKK members saw Perla give Weather a goodnight kiss, they attacked the pair and ultimately lynched Weather, hanging him from a tree to die. Perla cut him down and, not realizing he still had a faint pulse, jumped off the nearby cliff to her death.

Not long after, when Pucci was stabbed by the Arrow, Weather gained a Stand ability on his own as well. After regaining consciousness, he sought out the head of the "private detective agency" for information on Pucci. Weather was filled with rage at both himself and the world, but his Stand made it impossible for him to kill himself. He tried jumping off a cliff, but winds blew him back to the cliff side. He tried drowning himself, but the waves pushed him back to the shore. He even tried shooting himself, but the gun chamber filled with water and refused to work. On the fourth day after his regained consciousness, snails began to rain from the sky as a result of his Stand. Pucci then confronted Weather, revealed that they were brothers, and removed Weather's memory disc using Whitesnake.

First introduced as an amnesiac, Weather aided Jolyne at Emporio's request. Distant and a little naive, he continues to assist Jolyne and her companions from there after. He serves as valuable back up for F.F., causing the sky to rain if she is too dehydrated. After Pucci absorbs DIO's bone, Weather mysteriously gains a Joestar Birthmark. He joins Anasui -at the latter's insistence- in their search for Jolyne. Little is known about him as the story progresses until one of Dio's sons, Donatello Versus, steals his memories from Pucci's jacket. He regains his memories when Versus' Stand, Under World, returns the disc to him.

With his memories back, Weather renewed his thirst for vengeance on Pucci. Anasui, demanding that they shift their focus to finding Jolyne, relented when he heard Weather's resolution. Weather felt that he was on his death bed and did not want anyone else to join him. He was not afraid to face death, feeling cheated from death for the last twenty years.

With the birthmarks, Weather hunted Enrico easily and the brothers finally fought. Even with a severed leg (caused by Pucci, who extracted his own ability to see in order to avoid Heavy Weather's effect), Weather continues the fight thanks to the help of Diver Down. Although the fight was clearly in Weather's favor, Donatello Versus crashed a car nearby, distracting Weather from the finishing blow. Pucci used this chance of weakness to stab Weather through the heart with his hand. In his last moments, he was able to wrestle his Stand disc away from Pucci, a gift he left for Jolyne.

His vengeance was ultimately delivered when Emporio used Weather's Stand to defeat Pucci. In the alternate universe, when Irene and Annakiss finally manage to start up their car, with Ermes and Emporio in tow, an alternate Weather is shown as a hitchhiker and joins the group shortly after.

Weather Report appears in All Star Battle as part of the stage hazard in the Green Dolphin Street Prison stage. After one of the players is knocked into the hazard indication area, Weather will be seen injured and sitting in the background behind the gate of the courtyard, conjuring clouds shortly before the stage begins raining frogs (replicating the events from the Flash Flood Warning chapters in Part 6). The frogs will inflict poison status to anyone struck, temporarily turning their stamina bar purple as they suffer a gradual loss of health. (This is the only way to contract poison in the game, aside from Pannacotta Fugo's Homicidal Virus).

Weather Report makes his first playable appearance in Eyes of Heaven. He was confirmed for the game alongside Jolyne, Ermes, and Pucci.

As a Stand User, Weather is one of many characters with wildly varied abilities that grant him uniqueness in battle. He may trap larger stage objects with lightning to shock and paralyze opponents, not unlike characters of the Ripple Style.

He is paired with "Kosaku Kawajiri" in the Eyes of Heaven Tournament, defeating Pucci and Akira Otoishi in the first round but eliminated by Giorno Giovanna and Guido Mista in the second. 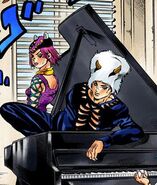 First appearance in SO Chapter 24
Weatherreport.jpg
Weather and his Stand

SO Chapter 41 Cover B

SO Chapter 45 Cover A

SO Chapter 45 Cover B

SO Chapter 47 Cover B
Weather.jpg
SO Volume 5 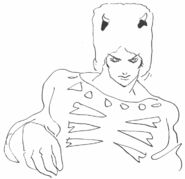 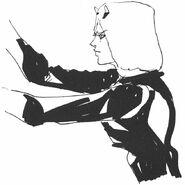 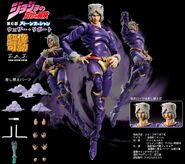