This article is about the Stand. For the Stand's user, see Weather Report.

This Stand is affiliated with Heavy Weather; another Stand or Stand ability belonging to Weather Report.

This Stand often takes the form of a muscular humanoid mass of clouds with a pair of eyes that have vertical stripes on them. It is always depicted as being surrounded by thick mist or miniature clouds. Its face possesses a mask-like structure with spikes topping its head. Though a majority of its body lacks identifiable armor or clothing, it has knuckle braces on its hands which is common with many other Close-Range Stands like it. Its feet have wing-like clouds resembling the shoes of Greek god HermesW.

The colored manga and Eyes of Heaven portray Weather Report as being white.

Weather Report shows no particular personality but evidences a greater degree of care and preservation for its user (like Star Platinum does Jotaro Kujo) when it repeatedly saved its user from committing suicide.[1]

It appears that it retains some of its user's will at its final individual opportunity to confront Enrico Pucci while it was in the possession of Emporio Alniño.

Weather Report is a versatile Stand possessing near-complete control over the weather. This powerful ability allows Weather Report a wide array of options during a fight either for offense or defense, and as a result, it is very capable in close-combat.

Weather Report's ability is to control the weather[2] through the manipulation of the atmosphere itself.

Weather manipulates the surrounding atmosphere with his Stand, allowing him to freely summon several weather phenomena like wind, rain, or lightning to his advantage. Weather Report has enough precision that it can create micro-climates,[2] but also a range great enough that it can make it rain 30 km away.[3] The scale of the phenomena is also controllable; thus Weather Report can create heavy rain and fog[4] over a large zone,[5] but also a small sunny area in the middle of the rain.[6]

Weather Report's most featured use of its ability is control over wind for various purposes.

Weather Report's control over the local atmosphere extends to the manipulation of the humidity around it; allowing free generation of, as well as partial control over water and by extension clouds.

Weather Report can also create electrical currents within its User's body, allowing partial control of several people's bodies when it electrifies them.[15] He can also bring otherwise unlikely elements of the weather like rains of animals (in one such case a rain of poisonous frog).[16] This particular ability is based off scenarios where dense populations of small animals are often picked up by tornadoes and 'rained' down when said tornadoes cease.

Lastly, Weather Report can manipulate the concentration of specific gases in a closed area. Emporio uses this subtle hidden ability to defeat Pucci by paralyzing and intoxicating him with a lethal concentration of oxygen.[17]

Heavy Weather (ヘビー・ウェザー, Hebī Wezā) is the unleashed and most capable form of Weather Report.

Unlike the rest of Weather Report's abilities, Heavy Weather is automatic, stemming from Weather's rage against humanity.[1] It is incredibly dangerous and nearly impossible to protect against, and only sealing the ability or killing Weather will stop the chaos it will cause.

In addition to the existing abilities of Weather Report, Heavy Weather generates various rainbows to fill a vicinity.[11] If someone touches them, their body will morph into that of a snail.[15] Only Weather Report is truly immune.

The transformation can be either a progressive change into a giant snail hybrid, a breakdown into numerous snails,[1] or an explosion into a cluster of snail eggs that hatch immediately.[11] One can also begin to turn into a snail by physically touching one of the snails created, or an individual already turning into a snail.[15][18] All animals are affected by the metamorphosis.

A partial transformation alone comes with a number of handicaps such as getting stuck on surfaces, sluggish reactions and speed, and loss of strength because of the softening of the body. Moreover, the victims also become vulnerable to snail-eating predators[19] and contact with salt, which dehydrates the body.[20]

Snails created through Heavy Weather can procreate freely thanks to their ability to change gender. The procreation is very fast and accelerates exponentially, causing a rapid multiplication of the snails. Any person trapped inside a swarmed area is practically doomed to be touched at least once and begin their metamorphosis. If left unchecked, the swarm of snails will endanger whole cities.[18]

It is eventually explained that Heavy Weather subconsciously alters the atmosphere and creates a subtle light projection with the sunlight that, if viewed, causes organisms to all think themselves as snails and forcing the transformation, like an exaggeration of subliminal messagesW.[9][21] It can be assumed that the symbolism behind Heavy Weather turning people into snails specifically is to counter the design and abilities of Made In Heaven.

As discovered by Enrico Pucci, a blind person is immune to the effect of the Stand, since they can't see the subliminal messages carried through the sun rays.[9] This allowed Pucci to protect himself by having Whitesnake extract his sight. Regardless, once a person starts transforming into a snail, the process is irreversible.

Ability to block bullet ammunition, even against the user 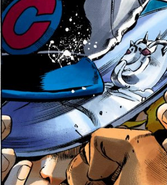 Weather Report, as a DISC, is being inserted into Emporio