Chapter 18 - Jack the Ripper and Zeppeli the Strange, Part 1

Chapter 35 - Pluck for Tomorrow and the Successor, Part 3

Zeppeli is a Ripple master hailing from Italy who searches for the Stone Mask to destroy it. Hearing about Dio Brando, he thus becomes Jonathan's mentor and teaches him in the art of the Ripple as well as fights alongside him.

Zeppeli appears as a man of average to above-average height, muscular build and defined, pointed facial features. He has dark, curly hair that protrudes somewhat from under his hat and a thin, well-groomed handlebar mustache.

Between two outfits, he wears a suit, a bow tie, and a top hat; first characterized by a rainbow print, and then by a checkered print. The latter design is consistent in the anime, however.

Will Anthonio Zeppeli is a fearless but eccentric Ripple master dedicated to battle evil.

As a master of the Ripple, Zeppeli is confident and brave, notably thinking that one's courage is proportional to the hardships one faces.[3]

The Ripple master notably keeps a methodical and cool approach to battle despite the horrible fighting styles of the enemies although his experience may help. For instance, he tries to teach Jonathan to put himself in the enemy's shoes to predict their actions.[4] Having been predicted his death by his master Tonpetty, Zeppeli bravely walks toward his demise and sacrifices himself to help Jonathan. Ultimately, Zeppeli was strong-willed enough to crawl toward Jonathan despite having the lower half of his body cut off.[5]

Zeppeli is a righteous individual dedicated to battle evil.[6] After surviving a Vampire attack, Zeppeli spent the rest of his life to investigate the Stone Mask and then learn the Ripple to battle its vampiric spawns.[7] In addition, he opposes human courage to the inhumane strength of the Vampires and Zombies.[4] When Dio implies that he's killed many people to heal his wounds, Zeppeli becomes enraged and quickly jumps to attack the Vampire.[8]

The Italian holds the Ripple in high esteem, praising it as a culmination of the human spirit and claiming that one needs to have endured a difficult life to create it.[9] Indeed, Zeppeli links one's ability to keep calm to the ability to keep a regular breathing.[3]

Otherwise, Zeppeli shows himself as a fairly quirky individual. Against all conventions, Zeppeli approaches an injured Jonathan and gives him the power of the Ripple without having met him previously.[10] Likewise his teaching methods occasionally involve convoluted ways to form his student, for instance, showing off his Zoom Punch attack by punching Jonathan before explaining its principles[7] or forcing Jonathan to hold a cup of wine, hiding its use as a radar. Moreover, he shows a number of other small eccentricities such as gratuitously jumping high with his legs crossed, having a tendency to pepper his snack too much,[10] or bringing a wine bottle without the corkscrew and ultimately piercing its bottom to get to the wine.[11]

Having studied the technique for years with masters in Tibet and trained Jonathan himself, Zeppeli is an expert when it comes to using the Ripple. Aside from attacking, he is able to use it for other applications such as jumping, standing on water, healing wounds, reviving plants, and even limited foresight.

Born to a scholarly family, Zeppeli had been interested in researching the unknown since his youth. When he became of age, he joined the archaeological group at his father's university and was able to travel to various places around the world.

On one of his travels, the group went to Mexico to excavate an underground Aztec ruin. Amongst their finds was the Stone Mask.

On the voyage home, several of the crew began to die off, until they realized that someone had put on the mask. It turned out to be the leader of the group, Zeppeli's father. All 58 crew members were slaughtered, but Zeppeli managed to escape by jumping into the sea. His father was eradicated by the morning sun soon after. Zeppeli was eventually rescued several days later by a fishing boat.

Two years after this horrific event, Zeppeli travels the world in order to find a way to destroy the stone mask. In a town in India, he meets a strange man with the ability to heal even the most impossible injuries and sicknesses. The man directs Zeppeli to his master, Tonpetty, who teaches him to use the "Ripple". However, during his training, Tonpetty foresees Zeppeli's death and warns him that should he complete his training he will surely die. Zeppeli accepts his fate and agrees to complete the training along with Dire.

After hearing that Jonathan Joestar defeated Dio Brando, the current owner of the Stone Mask, Zeppeli presents himself to Jonathan and volunteers to teach him the Ripple after using it to heal Jonathan's shattered arm. Zeppeli then accompanies Jonathan and Robert E. O. Speedwagon on their quest to defeat Dio and destroy the Stone Mask. Zeppeli briefly fights Jack the Ripper before giving the task to Jonathan in an attempt to teach him to more effectively use the Ripple. He also tries to help Speedwagon discover the Ripple in the same was as Jonathan, but makes a mistake and simply knocks the wind out of him instead.

When Dio reveals himself to the group, Zeppeli quickly engages him on his own - however, his arm is flash-frozen in the battle by Dio, totally disabling his Ripple techniques and putting him out of commission until Speedwagon comes to his aid. When Dio summons the Dark Knights, Zeppeli and Speedwagon are unable to assist Jonathan in his fight against Bruford due to Tarkus's interference. After Bruford is defeated, Zeppeli and Jonathan use their Ripple on a pile of leaves to make a hang glider to escape Tarkus, who eventually manages to catch up. While Jonathan is struggling to defeat Tarkus, Zeppeli enters the battle with Poco's help and finally shares his knowledge of his own fate.

As Tonpetty's prophecy foretold, Zeppeli battles with Tarkus and becomes wrapped in his chains. Tarkus attempts to kill Jonathan and Zeppeli at the same time, bifurcating Zeppeli at the waist (as well as amputating an arm) and breaking Jonathan's neck - however, Zeppeli is able to give his power and life energy to Jonathan moments before dying. It is by this power that Jonathan is healed and able to defeat Tarkus. Despite his ravaged body, Zeppeli manages to stay conscious for a few minutes, chastises Jonathan for grieving and implores him one final time to defeat Dio for good and destroy the Stone Mask. He takes his last breaths knowing he will live on through Jonathan and dies in his arms. His remains are cremated by Jonathan and Speedwagon in the old knight training grounds where Tarkus was slain.

It is later revealed that Zeppeli had sent a letter to his master Tonpetty asking for help in destroying the Stone Mask, though Tonpetty arrived too late to prevent Zeppeli's death. After his passing, Speedwagon gains a penchant for wearing his signature checker-print top hat.

Relationships in Eyes of Heaven

(The information below derives from a Video Game not written by Araki. As such, it may not be considered canon.)

Phantom Blood for the Playstation 2 marks Zeppeli's first appearance in any other media outlet outside the manga. He's one of the 5 characters that can use Ripple.

Zeppeli returns as a playable character in the PS3 game. He was confirmed along with Jonathan and Johnny Joestar. As a Ripple-user character (along with Jonathan, Joseph Joestar [Both Parts 2 and 3], Caesar, and Lisa Lisa), Zeppeli can recharge his Heart Heat Gauge through "Ripple Breath" by holding down the Style button, performing a famous JoJo pose, as well as deliver enhanced versions of skills if Style is inputted in place of normal attack buttons. As a Ripple master, Zeppeli's Ripple Breath replenishes the HHG faster than most other Ripple users, being roughly 150% of the normal rate and tying with Lisa Lisa's for fastest in the game.

Zeppeli's moveset mostly comprises of the Ripple-based moves he had used in the original manga.

If Zeppeli fights Caesar before the match starts they will have a special dialogue, where Caesar believes Zeppeli is an impostor and says he will make Zeppeli pay for impersonating a member of his family, while Zeppeli himself is surprised to see such power emanating from the youth.

Zeppeli also has an alternate costume, that being the tuxedo he wore originally (with a rainbow themed hat), as well as one of his alternate color schemes resembling his previous video-game appearance (red hat and green suit).

Zeppeli appears in the game as one of the several Part 1 characters who possesses a Metal Striker. His FINISH move enables him to shoot several Ripple Cutters upon the defeated opponent.

Zeppeli was confirmed for the game alongside Jonathan and Speedwagon.

As a Ripple User, Zeppeli has a Ripple Gauge that determines the strength of his attacks. Filling up the gauge will automatically empower his Normal and Powerful Attacks, and enhance/alter the properties of all his skills. It will also shorten the cooldown time on said skills. Using skills will drain a portion of the Ripple Gauge until there's an insufficient amount to use.

In the campaign's ending, he is shown to have survived his battle against Tarkus and is at Speedwagon's side during Jonathan's battle with Dio.

He is paired with Koichi Hirose in the Eyes of Heaven Tournament, but was eliminated in the preliminaries by Jonathan and DIO. 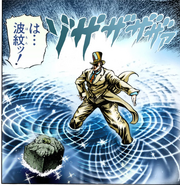 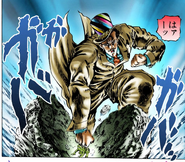 Will and Jonathan in unison 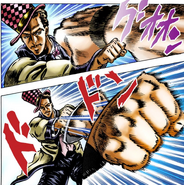 A young Zeppeli as a sailor 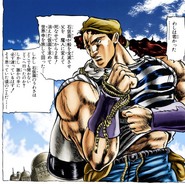 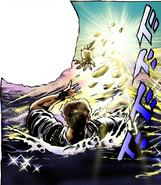 Saved by the sun from none other than his own father

Zeppeli as a Ripple apprentice 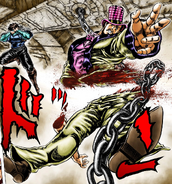 Will cut in two 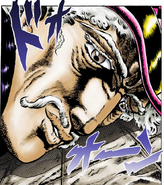 An old Will A. Zeppeli

Zeppeli in the anime

Zeppeli as a young sailor

Zeppeli saved by the sun from his vampirized father

Zeppeli training with Dire, years ago

Zeppeli with his Master Tonpetty

Zeppeli showing the Ripple to Jonathan

Zeppeli training Jonathan in the Ripple

Zeppeli with Jonathan and Speedwagon 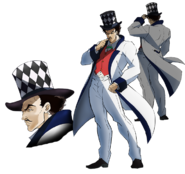 Concept Art for the anime

Zeppeli in the ending credits 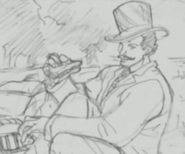 Zeppeli As He Appears In The OVA's Timeline Videos

Zeppeli in the Phantom Blood movie

Demonstrating Ripple on the frog

Jonathan with the wine glass

Performing in unison with Jonathan

Bursting into the arena were Tarkus and Jonathan are battling

An aged Zeppeli, dying in his student's arms

Zeppeli as he appears in All Star Battle

Zeppeli fighting in Eyes of Heaven

Zeppeli with Jonathan upon activation of their DHA, EoH 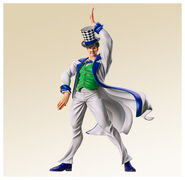