Despite being a powerful American Senator, DIO hijacks his car and forces Wilson Phillips to become his chauffeur in order to pursue the Joestar Group in the streets of Cairo.

Wilson Phillips is a short and overweight middle-aged man, sporting a mustache consisting of two small whiskers on the side. Phillips wears a two-piece dark suit and a bright polka-dot bow tie, and also wears a trilby as a hat.

At first Wilson Phillips presents himself as a humble gentleman who doesn't care much for the people around him, capable of greeting with a smile the man who just broke the arm of his driver and invaded his car for no apparent reason. He also is confident of his authority, claiming that no one can do anything to him due to being a senator of the United States and believing he would one day be President. When put under great pressure by DIO, his sanity is lost and he doesn't care for anything anymore.

Even before losing his sanity and based on his internal monologue, it is seen that the senator was already under large delusions of grandeur, as he muttered to himself all the accomplishments on his life, believing he was unstoppable and would be able to surpass anybody, despite the obvious demonstration of strength presented by DIO and that could easily kill him.

It was only until DIO wasn't daunted by his threats that the senator found the one thing he was truly powerless against, thus breaking his evidently fragile ego.

According to his inner monologue, he graduated high school and college at the top of his class (and as captain of his college wrestling team) and then went on to become a revered and respected politician. He then married a model 25 years younger than him and had a thousand acres of a villa in Hawaii. He also claimed to pay 50 times the taxes an average person does.

In the JoJo's Bizarre Adventure OVA, DIO instead lets Wilson Phillip's car nearly run into him, as DIO stops time just before the impact (presumably wrecking the vehicle by having The World damage it during stop time). After DIO gets into the Senator's car, Wilson Phillips appears to be much more genuine than in the original source material (never monologing about his higher power), even apologizing to DIO for his driver's rude behavior and giving his regards to DIO, saying he hopes he wasn't hurt in the collision. After DIO tells Wilson Phillips to start the car he says he can't because DIO knocked out his driver and then offers DIO some money to hail a taxi.

DIO never pulls Phillip's teeth out, instead only throwing him to the front of the car. Phillips tells DIO he can't expect to get away with his actions and tries to crawl to the back of the car, only to be kicked back to the front. After this, he says he will have DIO executed for what he has done and then runs out of the car, only to find himself running back into it. After a second attempt the same happens and he's forced to do DIO's bidding.

Wilson's Phillips death is changed, instead of being thrown out of the car by DIO, he instead crashes into a moving train, causing an explosion. After said explosion, DIO drags Phillips' corpse away from the debris and leaves it to chase the Joestar group.

Wilson Phillips is a senator from the United States who first appeared in a car that was forced to stop by DIO, who wanted to chase Joseph Joestar. DIO asked Wilson's driver if the car was still working, but instead of an answer, the driver tried to intimidate him, having his arm broken soon after. DIO then entered the car, where he was greeted by a friendly Wilson, who said the driver wouldn't be able to take them where he wanted with his arm broken. DIO ordered Wilson himself to chase Joseph, beating him up even after the senator tried to use his influence to scare DIO.

Unable to leave the car due to The World's ability, Wilson is left with no choice but to obey. When they enter a road full of cars, DIO forces Wilson to drive through the crowd. The senator slowly loses his sanity due to DIO's acts, becoming crazy and willing to chase Joseph on free will. The car crashes and Wilson dies, his body being thrown by DIO in the direction of Joseph's car to stop him.

Wilson Phillips appears as part of the stage hazard in the Cairo Streets stage. After one of the combatants gets thrown in the hazard indication area, Wilson appears and slowly walks away, and later he appears insanely driving the car, hitting anyone near its trajectory, following DIO's orders (much like he did on the story events).

However, if DIO appears as one of the combatants, Wilson's panel picture, being afraid of DIO, does not appear during the hazard event, only his second panel does, showing his insane face. 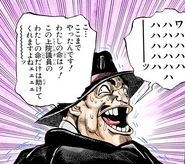 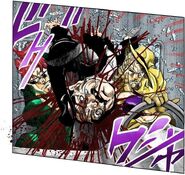 With a smile, Wilson tries to reason with DIO

Wilson found dead after being thrown through a windshield