Chapter 94 - Climb Out of the Fortified Hotel

Chapter 94 - Climb Out of the Fortified Hotel

Episode 21 - A Hundred Against Two

Stardust Shooters
Wired Beck (のベック, Waiādo no Bekku) is a minor antagonist appearing in Battle Tendency. He is a Vampire created by Kars tasked with guarding the hotel Kars is hiding in and briefly battles Lisa Lisa.

Wired Beck is a muscular and tall light-haired vampire who has sideburns and a flattop. He wears a stripped suit revealing the shoulders and the better part of the chest, held by two leather straps. He also has several metal rings at the wrists and a belt decorated by several beads.

Wired Beck is a violent misogynist who believes women deserve to be punished, having at some point killed his own girlfriend. When Beck speaks, he has the tendency to place "zura" (ズラ, roughly translates to "Okay") at the end of almost every sentence. He also has a very grating tone to his voice as Joseph indicted from his reaction to Beck's behavior.

Body Spikes: As a vampire, Wired Beck has complete control of every aspect of his body. His main form of attacking is by sharpening the hair protruding out of his limbs into spikes. Coupled with his unorthodox speed, Wired Beck is capable of lunging at his opponents and delivering them a lethal embrace.

Wired Beck was a fugitive convicted for strangling his girlfriend. After breaking out, he eventually became one of Kars' servant vampires. As a vampire, Wired Beck has the unique ability to grow splinters from all over his body.

Wired Beck first appears trying to prevent Joseph Joestar and Lisa Lisa from reaching his master, Kars. Appearing as if merged in a door, he surprises Joseph, who first believed him to have ten fingers on his hand, only to later realize that it was part of his power. Wired Beck comes out of the door and confronts Lisa Lisa, who uses her Ripple scarf on him before walking off. Joseph explains that Lisa Lisa had saturated his body in Ripple energy, but before Wired Beck is able to fully question it, the attack takes effect and he dies instantly.[1]

Wired Beck hidden inside a door 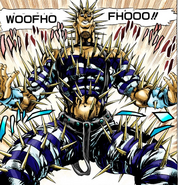 Beck emerging from the door 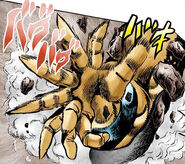