Wonder of U has two forms, its main stand form and its disguise of Satoru Akefu, the TG University Head Doctor. As Satoru, Wonder of U appears as an 89 year old man, stooped and walking with a cane. He wears a black bowler hat and coat, gloves, and a scarf. His coat features buttons that resemble small suns. Usually, the doctor is only seen from behind, but when his face is revealed, he is shown to be an old man with a monocle, braided hair, and a series of spikes surrounding his mouth. In its human form, Wonder of U is visible to non-stand users, but it is unknown what they see when the stand teleports between locations or assumes its non-human form.

In it's stand form, Wonder of U stands upright and Akefu's human face is replaced by a mechanical head which resembles a radio microphone or a machine. Its eyes are shaped like suns, similar to the coat buttons. Underneath its clothing, Wonder of U has a slim, articulated mechanical body with a pair of blades on its arms.

Wonder of U is a sentient Stand that is considerably expressive and holds a calm yet threatening demeanor.

It's surprised when Rai Mamezuku gets as close as a few centimeters to it. When it's wounded by Josuke's bubbles, Wonder of U is shocked that anyone could wound it.

Wonder of U is perceptive, as it sees through a trap Josuke has been laying for it and quickly analyzes the threat that Josuke could pose. Wonder of U is fairly resourceful, as it takes care to avoid direct combat by utilizing rock insects. As Josuke discovers a new aspect to his Stand's bubbles, Wonder of U decides that the best course of action is to simply retreat.

The Stand goads its enemies into pursuing and triggering its ability, an example of this being it revealing to Rai Mamezuku that it killed his father.

Wonder of U asserts its dominance over humans in general, such as when it declares that they have no permission to possess anything. It values the Locacaca 6251, noting their price tag of 200 million yen, but also highlighting their value to the world as a miracle medicine. Josuke wrecking the supply goads Wonder of U into approaching Josuke.

Wonder of U has a habit of occasionally stating its name in conversation.

Those who commit an act of "Pursuit" against the stand will suffer from "The Flow of Calamity." Anyone affected by the flow of calamity will be subject to a series of incidents with the intent to kill or disable that person. In the case of multiple pursuers, whoever is the most recent or active in pursuing Wonder of U, or Toru himself, becomes the priority target. After the first person dies from a calamity, the ability moves on to the next target, creating a stacking effect. Only the highest priority target will be affected by the ability at any given time.

The range of the ability is unclear, but it appears to be infinite as long as the victim retains the intent to pursue. The stand can also phase through walls and hover in the air. It also seems to be able to teleport at will, as it completely disappeared when being pursued by Rai. Later on, it was able to instantly shift places between TG University Hospital and the Higashikata House. In addition to its ability to teleport directly between locations at a distance, Wonder of U can also move rapidly within a smaller area by gliding along and within flat, reflective surfaces.

Though Wonder of U is an automatic stand, Toru seems to have a limited ability to control Wonder of U directly, effectively allowing him to be in two places at once. When Toru is actively controlling Wonder of U, his eyes glaze over and have a dull look. When Toru is back in control of himself, Wonder of U seems to stand facing a wall if it is not actively reacting to a pursuer. If someone observes the stand in this state, they will see Satoru Akefu with his eyes dull and glazed over.

While the specific stat rankings for Wonder of U are not known, it has demonstrated proficiency in using its cane as a defensive tool. It has been shown rapidly deflecting a flurry of frozen bubbles as well as deflecting a precision shot from Josuke.

Wonder of U's main ability revolves around the concept of 'Calamity', bringing impending doom to anyone pursuing Toru or Akefu (the Stand's 'human' form). The pursuit does not have to be in the form of a direct chase, as even the intention, will, or desire to pursue Wonder of U in the future will cause the stand to activate. The intent to pursue seems to need to be more than just coincidental, however, as Akefu had to coax a declaration of intention out of a reporter who threatened to expose him. Only when the reporter's intention was clearly stated to be in pursuit of Akefu and the Rokakaka was Wonder of U able to kill the reporter with a calamity. This is in contrast to the crowd of hundreds of people who came to the hospital with the specific intention of listening to a presentation given by Akefu, none of whom were affected by a calamity.

It is also possible to act in a way which would cause Toru or Wonder of U to pursue the target, instead of the other way around. If this occurs, the stand will not activate its ability. This makes it possible to close the distance with the user or the stand without triggering it.

The exact form the calamity takes varies, but always involves redirecting aspects of the nearby environment towards the target in a harmful manner. Upon contact with any object influenced by part of the calamity, the target receives an extremely disproportionate amount of damage, especially from impacts. The damage the object can cause will only affect the target, and not obstacles in the way or bystanders unaffected by the calamity. Objects touched directly by Wonder of U can be "charged" with calamitous energy as well, allowing the stand to create additional area hazards. If the target manages to avoid or survive a calamity, another one will always follow shortly afterwards. Examples of this ability include:

The stand can even influence the Locacaca's 'Equivalent Exchange' - when Josuke tried to drink the serum while still intending to pursue Wonder of U, the exchange happened in a way that threatened to suffocate him. Only when someone else without the intent to pursue administered the serum for him was it able to perform a normal exchange.

Wonder of U will apply calamitous effects to any object in the area of the target in an attempt to kill or disable them. When Rai was testing the limits of Wonder of U's ability while in prison, he was attacked by spilling liquid and an exploding light bulb. When those calamities failed to damage him, a normal tray of food suddenly became diseased, and erupted with maggots and a dying rat.

In the absence of any objects which can be propelled at the target to create an impact, Wonder of U seems to have the ability to affect nearby people and influence their behavior or actions. This was first seen in the Hospital parking lot when a nearby patient got unusually angry with Josuke and advanced to touch him. When Jousuke prevented contact using his bubbles, the man's neck snapped 90 degrees to the side, killing him instantly. This has also been observed with a prisoner going into a rage and attacking Rai and Joshu going berserk and attacking Yasuho.

Dying from a calamity or losing the will to "intend to pursue" either Toru or Akefu will remove the target from the calamity priority stack.

It is revealed in Jojolion chapter 108 that even after Toru's death, Wonder of U can act due to the fact that it represents, and is made from the idea of the Calamity itself, with Rai even theorizing that it was born from a some type of "calamity energy". This makes it the second stand to be made out of a supernatural force, the first being Ball Breaker. 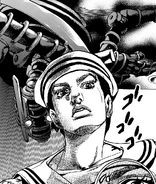 Close-up of Wonder of U without its clothing. 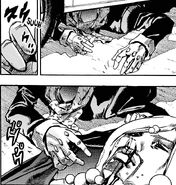