Yo-Yo Ma is an automatic Stand that appears as a rotund dwarf with a German-style military helmet's spike (pickelhaubeW) protruding from its head.

It possesses a scaled body and wears overalls holed to show the knees.

Its design is based on the various forest fairies in Grimm fairy tales.[1]

Yo-Yo Ma is green with blue clothes and pink gloves in the colored manga.

Yo-Yo Ma is indestructible, and will even relish its pain in a masochistic fashion.[2] It seems to have a fixation with eating things and can often be seen drooling excessively. When it is assigned a target by its user, Yo-Yo Ma will follow them and obsequiously assist them in any way possible.[2] This is to make the target drop their guard.[3]

Yo-Yo Ma is an Automatic Stand characterized by its high range, autonomy, and resilience, allowing D an G to sic it on Jolyne Cujoh and wait from afar until Yo-Yo Ma kills her with its acid.

Yo-Yo Ma is shown to be near indestructible, taking 6 shots from a pistol, getting punched multiple times by Stone Free without taking any damage[2] and wasn't even killed when disabled by Narciso Anasui with the user instead being beaten.

Unlike most automatic Stands, Yo-Yo Ma possesses a high degree of intellect. It knows a fair deal about survival in the swamps, knows how to pilot a hovercraft, or can craft miscellaneous useless items out of junk like a chair out of twigs.[2] The only instructions it receives are general goals to achieve such as killing Jolyne and retrieving the Green Baby. It is then free to act as it pleases and will dispose of any person in its way.[4]

Yo-Yo Ma produces an acid saliva, which it sprays everywhere unnoticed by drooling. It then waits for the victims to get exposed and melt. It is able to melt whole chunks of flesh[2] without causing bleeding or pain as the dissolution can go unnoticed from some time.[3] It has multiple ways to attack with it such as inserting it into the bodies of biting mosquitoes and mixing it with water in front of a moving boat to cause it to splash those on-board.[5]

After Jolyne Cujoh, Narciso Anasui and F.F. escape from the maximum punishment ward, Yo-Yo Ma appears suddenly and swallows the sphere containing the still-forming Green Baby. The three escapees use their Stands to pummel Yo-Yo Ma into the ground but are unable to retrieve it. Even Diver Down proves ineffective, as Anasui can "feel" the enemy Stand's stench through his own. Yo-Yo Ma suddenly starts acting overly-friendly - creating a chair out of branches for Jolyne to sit on, offering her a comic book, cleaning her shoes and catching a bee that flew too close. Unable to do anything about the enemy Stand, Anasui and Jolyne take it with them as they flee by motorboat and leave F.F. to find and kill its user. Before parting with her, however, Yo-Yo Ma makes sure to melt part of her face with its acidic saliva while the other two aren't looking.

When the pursuing prison guards almost discover Anasui and Jolyne's motorboat hiding in the marsh, Yo-Yo Ma helps them to camouflage themselves and the boat to look like water rushes. Unfortunately, they are found anyway and, while Jolyne's attention is focused on the guards, Yo-Yo Ma releases a mouthful of mosquitoes containing its acidic spit. Shortly after, Anasui punches him off the boat and into the guards as a distraction. After commandeering the guards' motorboat and resuming their escape, Jolyne comes to realize that she is unable to speak due to the large holes in her tongue and correctly assumes they are the result of the enemy Stand's attack. After Yo-Yo Ma attacks her a second time, incapacitating her, Anasui finally realizes that the enemy Stand is not friendly at all. However, his attempts to discern Yo-Yo Ma's method of attack only result in him receiving the same sort of injuries as Jolyne. Ultimately, he ends up implanting a frog in Yo-Yo Ma's head and connecting its brain to the target sensor - thus causing the Stand to act and think like a frog. Yo-Yo Ma then becomes unable to fulfill its intended function or even to keep its concentration for any longer than a few seconds. Only when F.F. kills D an G does Yo-Yo Ma implode and blow away as dust. 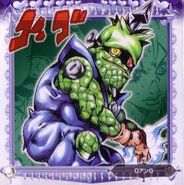