Yuya Fungami (噴上 裕也, Fungami Yūya) is a minor character in Diamond is Unbreakable. Yuya is featured as an antagonist in Highway Star, and then as an ally in Enigma Boy.

Yuya is a motorcycle gang member who was made into a Stand User by Yoshihiro Kira and was then prompted into attacking the Joestar Group. He lures Rohan into a trap and later pursues Josuke in a high-speed road chase with his Highway Star. Yuya later assists Josuke and Koichi as an ally and friend in the fight against Terunosuke.

He is shown with the rest of the group when Reimi departs.

Yuya is a handsome young man of similar height to Josuke, with a fit build and muscular body. He has a slicked back under-shaved style haircut and his chin is tattooed with a stylized "H☆S", implying the name of his stand - Highway Star.

Because he is a bōsōzoku style motorcycle racer, a trend among motorcycle-loving Japanese men in the 1970s, Yuya wears a dark, modified uniform with a unique star pattern emblazoned across it. He wears a long, bouffant, white bow tie with the words "Highway" and "Speed King" which is the direct translation of his name.

Introduced as he attacks Josuke from afar, flanked by three female admirers, Yuya comes across as vain, selfish, and cowardly.

However, he shows a sense of loyalty, bravery and good skills of deduction when joining the battle against Terunosuke Miyamoto. He is protective towards his three admirers, who, in turn, are very close to him.

Terunosuke reveals that when afraid, Yuya tends to touch his chin.

Yuya's mainly automatic Stand is Highway Star, which tracks targets at a speed of 60 km/h in order to efficiently absorb their vitality. This allows Yuya to recover from injuries at a significantly faster pace.

Highway Star has multiple abilities which make it a powerful foe.

Yuya also has a powerful sense of smell, and can identify emotions based on their chemical scents

Yuya Fungami is a motorcycle racer who got drunk and suffered an accident. Because of that, he had his spine damaged and almost all of his bones broken, and was in such poor state that he could hardly breathe.

It is stated that the rest of his motorcycle gang perished in the accident and that it was a bloody mess, and was showed on the evening news

While in the hospital, he was pierced by Yoshihiro Kira with the Bow and Arrow.

Yuya tried to do the same to Josuke, but his location was found by Koichi, and Yuya was confronted by Josuke. Josuke healed him so he could be heavily injured again by Crazy Diamond. He was forced to stay in the hospital for a few more months under the threat of being beaten up again if he tried to use his Stand.

Yuya appears again when Koichi is kidnapped by Terunosuke Miyamoto. Josuke asks him to find Koichi with his heightened sense of smell, but Yuya warns him that this is the only thing he will do, not wanting to be an enemy of Yoshihiro. Josuke agrees, and they both end up finding Tomoko Higashikata shortly before Josuke is turned into a paper by Enigma.

Inspired by Josuke's bravery in his attempt to save Koichi, Yuya thinks about how he would do the same for his admirers and saves Josuke and Koichi, after which he is turned into a paper by Terunosuke. Koichi and Josuke save Yuya in return when Terunosuke threatens to tear the paper in which he is imprisoned. Yuya is seen saying goodbye to Reimi Sugimoto at the end of the part. He is last seen dining in Trussadi's restaurant with his admirers. 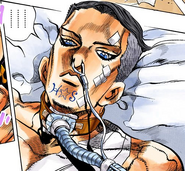 Yuya lying in his hospital bed.

Yuya smelling a strong source of adrenaline, unaware it's Josuke. 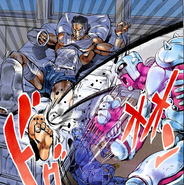 Yuya punched by Crazy Diamond, which heals his body.

Yuya punched out the window by Crazy Diamond.

Yuya with his groupies.

Yuya relaxing in his hospital bed, asking for one of his groupies to help him urinate.

Yuya attacks Josuke, draining his nutrients with his Stand.

Demonstrating his superhuman sense of smell by detecting a rotten peach.

Yuya smelling a strong source of adrenaline, unaware it's Josuke.

Yuya punched by Crazy Diamond, which heals his body.

Beaten to a pulp by Crazy Diamond.

Yuya laying unconscious and battered in the hospital's water fountain.

Reading a book as Josuke asks for his help.

Checking himself out in a mirror 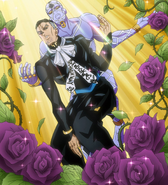 Admiring his 'handsome' face, after being healed by Josuke.

Sniffing out his groupies

Glad that his three groupies have arrived.

Trying to trace Koichi's scent from his schoolbag.

Yuya trapped in paper by Terunosuke.

Yuya and his fangirls enjoying lunch at Tonio Trussardi's restaurant. 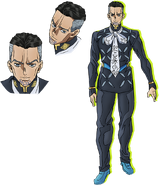 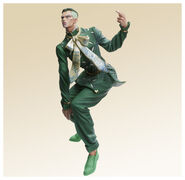 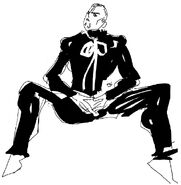